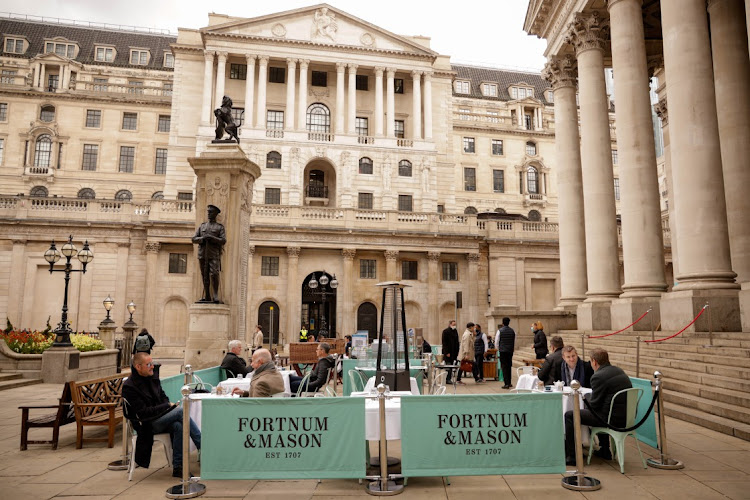 The Bank of England, in London. Picture: JASON ALDEN/BLOOMBERG

London — Central banks’ newfound zest for tackling inequality suggests that they were at least partly responsible for it in the first place, but some influential voices are pushing back hard on that idea.

Markets now pore over every detail of US jobs statistics for signs of lagging cohorts in the post-pandemic recovery. Friday’s April payrolls release will be another case in point.

That’s largely because the US Federal Reserve’s strategic review last year committed it to “inclusive” full employment, citing the drag on economic potential from marginalised groups and income inequality.

As a result, it’s now widely assumed the Fed will keep policy loose until as many disadvantaged income, ethnic and age groups as possible get back into work — even if aggregate jobless rates appear at “full employment”. And its more flexible averaging of its inflation target over time allows it run the economy “hot” for longer to facilitate that.

Fed chair Jerome Powell insists inequality merely “augments” thinking and has its limits. But the move partly responds to the charge that Fed tightening came too soon in prior recoveries to ensure all households were able to fully take part.

And yet “lower for longer” seems at odds with the other oft-heard critique of central banks — namely that excessively low interest rates and asset purchases over the past two decades actually increased wealth inequality by pumping up the value of stocks and bonds already mostly owned by the richest 10%.

Damned if they do and damned if they don’t perhaps. But the complexity of issue questions whether central banks can really do anything effective in this space at all.

The Bank for International Settlements this week raised a red flag over blaming monetary policy directly for rising income and wealth gaps and warned central banks against thinking they could now right that notional wrong.

On Thursday, BIS chief Agustín Carstens insisted the direct impact of central bank policy on inequality gauges was fleeting and shouldn’t distract from the overwhelming priority of macro stabilisation — preventing booms and busts far more damaging to job prospects and incomes for poorer households over time.

“Over the long run, inequality is not a monetary phenomenon,” he told an online Princeton University event.

“The best contribution monetary policy can make to an equitable society is to try to keep the economy on an even keel by fulfilling its mandate,” the former Mexican central bank chief said. “Governments can reduce inequality through more direct fiscal and structural policies.”

Carstens argued high inflation should continue to be seen as a regressive tax and that poorer households were the least able to hedge against it as incomes were usually fixed in nominal terms and their savings held in cash or bank accounts.

Indexation mechanisms only offered relief depending on their frequency of adjustment but real wages typically fall anyway and inflation just entrenches.

But there was a limit to the reduction of inequality from cutting inflation. He cited studies showing clear relative gains for low incomes families from taming inflation from high levels, but negligible gains from reducing inflation from already low levels achieved in developed economies over recent decades.

“This result suggests that the interaction between inflation and inequality becomes much more complex when inflation is low.”

Central banks’ jobs were complicated by a lack of responsiveness of inflation to interest rates due to globalisation and technology, he added, and also by a need to consider how the growing financial sector amplified cycles like never before.

Had bond buying altered the picture? He pointed out that income and wealth dispersion across developed economies had been rising for more than two decades before the banking crash and the introduction of quantitative easing (QE).

And even if QE-inspired asset inflation added to the problem in the short term, that was a lesser issue for the disadvantaged than facing the havoc that would have been wreaked without QE.

“Many more jobs would have been lost. And these jobs benefit all, including the young and low-skilled households which suffer from higher and more cyclical unemployment.”

Stable job creation over time was much more effective than toying with inflation, in effect.

To be sure, there was no direct criticism of the Fed — even an acknowledgment of Powell’s analysis of avoiding persistent joblessness in vulnerable groups. But it was a clear push back against both the consequences and ambitions of central banks in this area of policy.

Should the BIS matter in this respect?

And yet it’s been something of a Cassandra in recent decades — most notable for its repeated and largely ignored warnings about the danger of overly lax monetary policies before the global banking crash of 2007/2008.

As many fret about or even welcome a new higher inflation regime post-Covid, the reaction of central banks over the next couple of years will show whether their own central bank has been listened to this time.

While the cheap money created by low or negative interest rates has driven the price rises, they barely figure in central banks’ calculations of ...
World
5 months ago

ISAAH MHLANGA: Higher inflation will be a policy choice not a demand and supply outcome