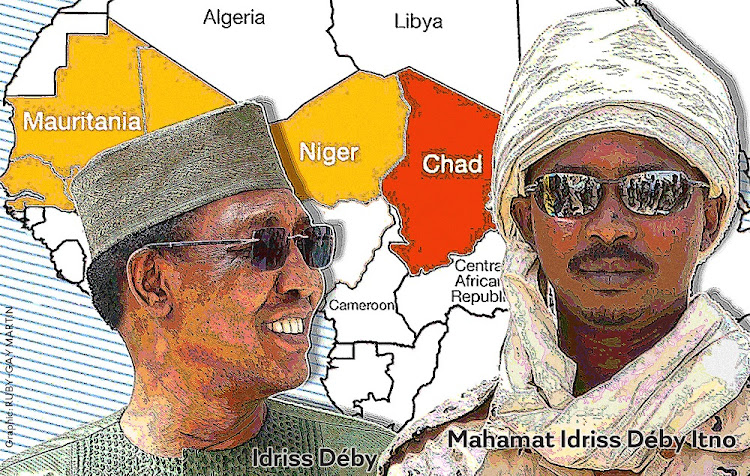 Chad’s military announced on April 20 that strongman president Idriss Déby had died from injuries suffered a day earlier while visiting his forces battling rebels in the country’s north.

For most of his 30 years in power Déby epitomised what is hindering the development of several African nations — a retrograde ruler who gains cover to loot their own country by pitching it to the West as a “stable partner” in the fight against terrorism.

Similar to incumbent strongmen in Cameroon, Egypt, Rwanda and Uganda, Déby’s despotic tendencies were not only tolerated by Western governments that profess to champion democratic values and human rights, but enabled by a steady supply of money, arms and military training due to Chad’s ascribed status as a defender of regional stability.

As Chad’s military chief in the 1980s, Déby first became a valuable ally of former colonial power France by helping counter expansionist aggression from Libyan dictator Muammar Gaddafi. His preferential treatment by the West was renewed over the past decade as part of efforts to combat Boko Haram’s incursions into the Lake Chad area, and to eliminate jihadist groups in the Sahel.

As surprising as Déby’s death was, it probably will not create either the type of destabilising power vacuum that some observers fear, or the type of euphoria and genuine democratic window that Zimbabwe had but lost after the death of Robert Mugabe.

The younger Déby, groomed for years by his father and former head of Chad’s elite presidential guard unit, will now lead a military-controlled transitional council tasked with arranging elections in 18 months.

He reportedly faces suspicion from some disgruntled senior officers, but they are likely to come on side, rallying around their new leader amid a rebel push towards the capital and the realisation that accepting his succession to power means the military’s patronage networks will remain intact.

This is bad news for Chad’s citizens, who already bear the scars of living under cronyism and kleptocratic rule for decades.

Despite possessing lucrative oil and mineral industries, Chad ranks 187 out of 189 countries in the UN’s human development index, which measures life expectancy, education levels and per capita income. The strategically-located country is perennially near the bottom of global rankings of hunger, infant mortality, corruption, and economic competitiveness.

While two-thirds of Chad’s population are mired in severe poverty (living on less than $2 a day), the country’s military consumes upwards of 40% of the national budget every year.

The commencement of possible dynastic rule in N’Djamena may be greeted with secret relief in Paris and Washington though.

The day before his death was announced, the 68-year-old Déby was declared the winner of another sham election, and constitutional amendments passed in 2018 would have enabled him to remain in power until 2033, when he would have been in his 80s had his health held up. That is typically around the time that an ageing president-for-life becomes more openly erratic, abusive and degenerate, equating dying in office with achieving a grand legacy, no matter the damage it does to their people and their nation.

The oppressive lead-up to Chad’s elections on April 11 generated notable international media scrutiny of Déby’s military regime and confirmed how his legitimacy was fading among the electorate. Demonstrations were banned, the internet was cut, and members of the opposition were arrested days before the vote on bizarre charges of plotting to murder civil society leaders and bomb polling stations as part of an elaborate attempt to frame the government.

Now, rather than having to confront the potential reality of one of its main African allies becoming an optics liability, the West will be able to continue relations as normal with Chad’s military regime, which is touted as among the most capable and battle-hardened in Africa.

It is also a leading member of the G-5, a security and development bloc which comprises Burkina Faso, Chad, Mali, Mauritania and Niger that has partnered with France to combat hardline Islamists in West Africa’s restive Sahel region.

The problem is that the relentless violence and conflict engulfing the Sahel shows this status quo approach is not working. Continued political instability, governance voids in rural areas and worsening climate change have triggered multiple insurgencies that have created a regional conflagration.

Much of the Sahel has devolved into a nexus of terrorism, banditry, human smuggling, weapons trafficking, mass displacement and intercommunal clashes between farmers and pastoralists over land and water, fuelling political instability and extremism.

Widespread poverty, inept governance, ethnic tensions and atrocities by state security forces, meanwhile, are fuelling the growth of local militias and swelling the ranks of roaming terror groups affiliated with Al-Qaeda and the Islamic State.

Eight years have passed since the region’s downward spiral began with jihadists taking control of northern Mali in 2012 after a military coup in Bamako. The territory grab itself was enabled by the chaos after the Nato-backed toppling of Gaddafi in 2011, another Western mission gone awry that former US president Barack Obama described as the worst mistake of his presidency.

Now, despite nearly a decade of foreign intervention involving thousands of troops, a UN peacekeeping force in Mali, and huge amounts of funding and military hardware — including a $110m US drone base in Niger — the Sahel is already on pace to experience its deadliest year yet in 2021.

Focusing too narrowly on the militarisation of problems and solutions only strengthens autocrats at the expense of getting buy-in from citizens and groups on the ground that are both perpetrating violence while also being negatively affected it.

By selectively turning a blind eye to dictators who marginalise their own populations and squander their nation’s development potential, Western efforts end up feeding the terrorism, political instability and conflict they are trying to help resolve.

• Hiebert, former deputy editor of the Africa Conflict Monitor, is a researcher and analyst based in Winnipeg, Canada.

The commodities trader had lent Chad R5bn, but repayment of those funds was already in doubt before the death of Déby
Companies
2 weeks ago

Déby will lead Chad for the next 18 months, despite Chad’s constitution requiring that polls be held within 90 days when a president’s post becomes ...
World
2 weeks ago

Idriss Déby died fighting rebels, reportedly, shortly after winning a sixth term with no deputy in place
World
2 weeks ago
Next Article