As in Nazi Germany, living a gay life openly under the constitution has merely made it easier for attackers 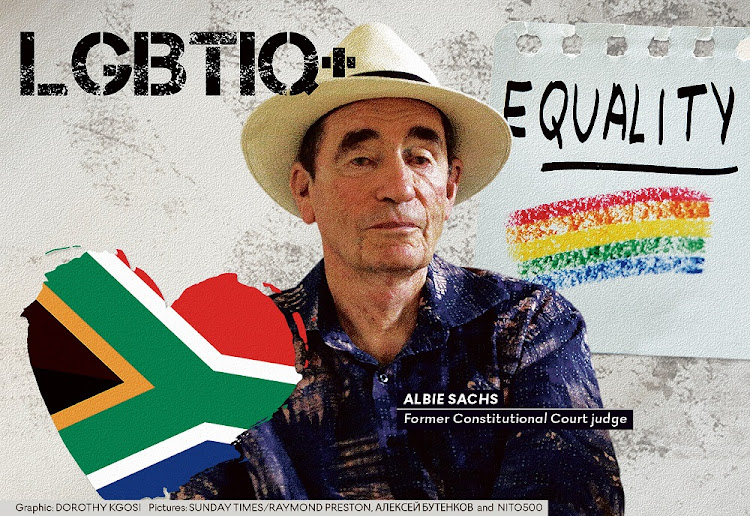 In the late 1990s the rights of LGBTIQ+ citizens served as the litmus test of SA’s democracy. Writing in October 1998, one of our greatest jurors, Albie Sachs, put it like this: “The success of the whole constitutional endeavour in SA will depend in large measure on how successfully sameness and difference are reconciled.”

Together with the vote, the greatest evidence of our freedoms was found in our LGBTIQ+ jurisprudence. The words “gay and lesbian” saturated the media. At times it appeared there was no other important news.

In section 9(3) the constitution explicitly prohibited discrimination on the grounds of sexual orientation. For this clause to appear in a document scripted in Africa was astounding: think of Robert Mugabe’s Zimbabwe and Yoweri Museveni’s Uganda and the point is made.

In the “sodomy” case of October 1998, Sachs linked discrimination against LGBTIQ+ citizens to apartheid: “At the heart of equality jurisprudence is the rescuing of people from a caste-like status and putting an end to their being treated as lesser human beings because they belong to a particular group.” Equality for gays and lesbians was, Sachs wrote, about “the nature of the open, democratic and pluralistic society contemplated by the constitution”.

Jump forward 30 years, to March 2021. Sphamandla Khoza, 37, a gay male from Ntuzuma, KwaZulu-Natal, is beaten, stabbed multiple times, his throat slit, and his body dumped in a sewer. His killers placed his shoes outside the gate of his home. Andile Ntuthela, 41 years, a gay male from KwaNobuhle, Uitenhage, last seen alive on March 31, is found stabbed, his body burnt beyond recognition. Nonhlanhla Kunene, a 37-year-old lesbian from Pietermaritzburg, is raped and murdered.

The previous month Bonang Gaelae, a 29-year-old lesbian from Sebokeng, was fatally stabbed in the neck after resisting the “advances” of a male predator. A year earlier Lindo Cele, a 23-year-old gay male from uMalazi was stabbed 21 times, a knife left lodged in his eye socket.

Still further back: in April 2008 Eudy Simelane, 31-year-old lesbian, an SA footballer, was found in a stream in KwaThema. She had been gang-raped, beaten, and stabbed 25 times in the face, chest and legs. In July 2007 Sizakele Sigasa, 34, and Salome Massooa, 24, both lesbians, were verbally abused outside a bar in Meadowlands, Soweto, then tortured, gang-raped and shot, Sigasa six times, Massooa once. And in February 2006 Zoliswa Nkonyana, a 19-year-old lesbian, was stabbed and beaten, her head crushed by a rock, and left to die in a gutter in Khayelitsha. The assailants were nine men.

This is a shamefully brief register of just some of the LGBTIQ+ citizens who have been brutally murdered. Many lived their sexuality openly, ostensibly protected by the same-sex jurisprudence that evolved in the “New SA”. From the Polmed case of February 1998 to the Civil Union Act of November 2006, access to full citizenship rights for LGBTIQ+ citizens was legally assured.

Paradoxically, our new visibilities, expressive openness and moral-legal claims sponsored hatred. To be “out” makes one an easy target. Freedom brought protection and intensified vulnerability.

History held ominous warnings. That Magnus Hirschfeld — a Jewish, homosexual, gay rights campaigner — founded his Institute of Sexual Research in a villa in Berlin made it easy for Hitler’s bully boys to target this site of “sexual immorality”. Four months after Hitler became chancellor the institute was trashed, staff assaulted and more than 20,000 books burnt. On the evening of May 10 1933 the Berlin police announced the permanent closure of the institute.

After the murders of Sigasa, Masooa and Qwabe, Human Rights Watch addressed a letter to then president Thabo Mbeki on Women’s Day in 2007. It pointed to the discrepancy between constitutional rights and the lived realities for black women and lesbians. Jessica Stern of Human rights Watch stated: “Poverty, prejudice, homophobia and sexism are building a new pass system, where many women dare not walk openly on the street ... All women and vulnerable groups must be safe and free.” In April 2021 the evidence tells us this sine qua non remains a pipe dream.

The history of “gay liberation” in SA is too long to rehearse here. However, as the excerpts from the writings of Sachs — who attended the first Cape Town Pride parade in 1993 — show, the issue is about values. Once more we see the constitution forging ahead of public sentiment. Put another way, the conception of the constitution as a repository of shared values is imaginary. From the first “gay” test case in February 1998 to the “gay marriage” case in 2005 — this was the last and most bitterly contested in our LGBTIQ+ jurisprudence — the government opposed the court challenges in every instance.

When parliament voted on the Civil Union Bill in November 2006, then home affairs minister Nosiviwe Mapisa-Nqakula said: “In breaking with our past, we need to resist all forms of discrimination and prejudice, including homophobia.” Knowing that a “free” vote would never see the bill passed, the ANC ordered a three-line whip.

Such contradictions in public attitudes were writ large in the “Stompie” trial of 1993, involving  Winnie Mandela. Outside the courtroom was a banner declaring “homosex is not in black culture”, and her defence advocate, George Bizos, blighted an illustrious career by arguing, falsely, that the heart of the matter was the “Mother of the Nation” dutifully saving black youths from white (homo)sexual predation.

The recent murders of LGBTIQ+ citizens show the still extant gap between law and social change. The history of our jurisprudence underlines the slippage between legislation and values in society. The law might require that bigots “assume a virtue though [they] have it not”.  Tardy police investigation and unenthusiastic prosecution belie legal commitments to equality. It took six years and 40 postponements for the Nkonyane case to be finalised. A key witness, offered no protection by the state, fled for her life. Her testimony was abandoned.

Police unwillingness to pursue eyewitness statements in the Sigasa and Masooa cases led to the formation of the 07-07-07 campaign. After the murder of Noxolo Nogwaza and several other lesbians in 2011 there was a global outcry, with about 170,000 people signing a petition calling on the government to act.

Our rights are underwritten — the word implies insurance and guarantees — by the constitution. But lives are cut short and legal girdings undermined by bigotry, both public and institutional.

The rights of LGBTIQ+ citizens remain a test of “the whole constitutional endeavour in SA”. They remain a test of our civility, though this is seldom mentioned in our craven, twilight times. It is a test we are mostly failing.

Users have a contract with service providers, not the state
Opinion
1 month ago