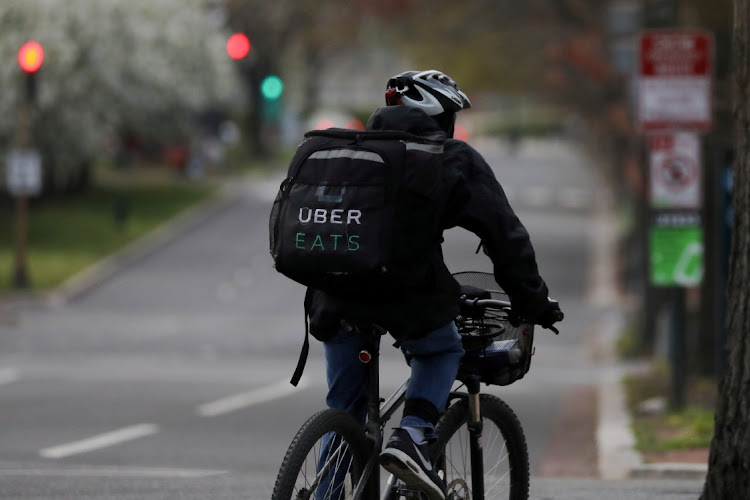 An Uber Eats delivery man in Washington, the US, April 1 2020. Picture: REUTERS/JONATHAN ERNST

Some 36 years ago I invited onto the Wits campus the recently elected general secretary of the newly launched National Union of Mineworkers, Cyril Ramaphosa. It was an invitation to him and his members to listen to the findings of a collaborative study we had done on safer underground gold mining. The researcher, Jean Leger, a young chemical engineer, demonstrated persuasively why black miners had the right to refuse to work in dangerous conditions.

Last week I repeated the process and invited food couriers to Wits campus to listen to the research undertaken by Fikile Masikane, a sociology graduate student attached to the Southern Centre of Inequality Studies, on the precarious conditions of these new app workers of the digital age.

The similarities in these two events were striking: they both involved research on unprotected and low-paid black workers, without a voice, largely from across our borders. Importantly, in both cases these workers were doing jobs South Africans tend to avoid. On both occasions the workers participated enthusiastically in the proceedings, adding to the findings and endorsing the broad thrust of the research.

The differences, however, were even more significant. In 1986 large numbers of mine employers arrived to listen to our research on underground mining. Indeed, some demonstrated their power by arriving in helicopters on the university’s lawns. They were outraged at the idea that mineworkers had the right to participate in making underground work safer.

Last week there were no employers when we presented our research on food couriers. According to current law, they have no employers. They are described as “independent contractors”, as self-employed. Besides, many are undocumented migrants and prefer to remain invisible for fear of having their apps disconnected.

We take for granted the convenience of having food delivered to our homes at the click of our mobile phones but are unaware of the risks these men and women take. At least six delivery drivers died in Cape Town between 2017 and 2019, with countless more injured. One driver described how he was injured while working; an ambulance was called and the company refused to pay the R2,000 bill because they said it was not their responsibility.

This gets to the nub of how the rise of platform capitalism is changing the world of work. This business model has transformed the employment relationship, creating a highly segmented labour market. It is deepening inequality between a small core of highly paid managers and owners, such as Jeff Bezos of Amazon, and a growing number of men and women engaged in precarious work. I refer to this as the “uberisation” of work.

This new worker of the digital economy is subject to a form of algorithmic management. Instead of clocking in, as in a traditional workplace with a timecard, “gig” workers log in to an app, and in so doing are subject to an external authority. Promising freedom, flexibility and “shared business ownership”, these new technology companies are ostensibly opening up new economic opportunities in Africa.

However, in our research a different picture emerges: the return of a rather old form of casual, informal work. Working long hours, lacking paid leave or social security benefits and earning below the national minimum wage, these are the working conditions of our apartheid past. By misclassifying these couriers as independent contractors companies bypass the worker rights that were established in our new labour regime.

Currently platform work is only 1% of employment in SA, divided between online web-based work performed largely at home (100,000) and location-based work such as food couriers (35,000). These numbers are very low, though they are expanding rapidly. But what matters is not so much the actual size of the workforce than the way they change the landscape of the wider economy. They are an example of what has become known as “disruptive innovation” — they circumvent existing rules on employment, social protection and corporate taxation.

Some countries have started to address this regulatory gap in digital platform work. The recent decision by the UK supreme court in Uber vs Aslam marks significant progress for these drivers/riders. The court held that the claimant Uber drivers should be considered “workers” for purposes of UK labour legislation, which defines workers as a type of hybrid between an employee and an independent contractor.

What is clear is that the time has arrived for SA to revisit the regulatory framework set up nearly three decades ago. Significantly, one of the first acts to be amended in post-apartheid SA was the Mine, Health and Safety Act of 1996, embodying worker self-regulation to advance health and safety in the workplace. An important provision for this is the right to refuse dangerous work.

On December 18 2020, in response to a fare decrease, about 1,000 food couriers collectively logged off the platform, forcing the company concerned to halt operations across Johannesburg. The demands had been formulated and the strike organised using WhatsApp groups.

This was the first city-wide strike of food couriers in SA — and is unlikely to be the last. Strikes have played a crucial role in shaping SA’s economic and political system. Indeed, many years ago mass strikes in Durban proved to be a turning point. They led ultimately to the formal recognition of black workers as employees and their right to engage in collective bargaining.

Let us hope we have employers in the digital economy sufficiently aware of our history to know that in the long run it is better to have elected worker representatives to negotiate with than unregulated conflict. It is an opportunity for a process of ongoing social dialogue between the companies and the riders of SA’s rapidly expanding food courier industry.

• Webster is with Wits University's Southern Centre for Inequality Studies.

ANC must ensure a basic income grant is universal and unconditional

Basic income is more than poverty alleviation — it is supposed to act as an economic stimulus, writes Karen Jooste
Opinion
1 week ago