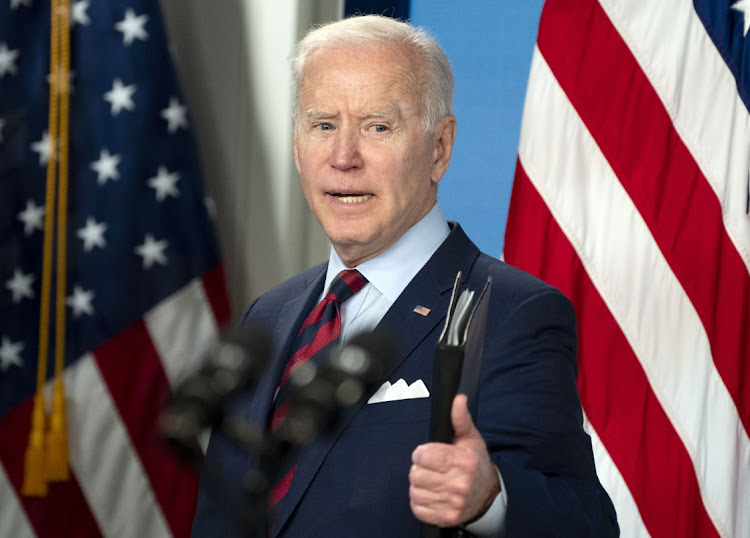 US President Joe Biden speaks in the Eisenhower Executive Office Building in Washington, DC, U.S, on April 7 2021. Biden promoted his $2.25 trillion infrastructure plan and described its passage as urgent to keep the US competitive against China. Picture: BLOOMBERG/LEIGH VOGEL

Like much of Joe Biden’s presidency to date, the $2.3-trillion infrastructure plan he laid out last week is remarkably ambitious. Rightly so. America’s economic future is at stake. The country needs a bold new commitment to public investment.

The US is visibly falling behind. Any recent traveller to Beijing or Shanghai is struck by how shabby American airports and city grids look in comparison. And this isn’t just about appearances. China is proving that modern infrastructure is an essential component of industrial competitiveness and economic growth. Unless something changes, Washington’s neglect of roads, bridges and other connective tissue, plus failure to invest in the infrastructure of the future — from digital access to clean power grids — will condemn the US to relative economic decline.

Give Biden credit for thinking big. His aims far exceed the kind of workaday repairs that have long characterised such proposals. Not content to fill potholes and mend bridges, the plan seeks to revive domestic manufacturing, overhaul the energy industry, mitigate climate change and undertake a variety of “transformative investments”. Biden is also right to see an opportunity to advance other goals at the same time — such as creating good new jobs and reducing inequality.

A particular strength is the plan’s bold proposals for decarbonising the economy. It aims for carbon-free electricity by 2035, offers tax credits for clean energy generation and storage, invests in carbon capture and sequestration technologies, adds significant new funds for climate research, and much else. In addition to reducing emissions, this push should boost growth, create jobs, and help level the playing field with fossil fuels.

All this is good. But the plan is by no means flawless. It does too little to address America’s enormous backlog of humdrum repairs. By one estimate, the total cost of deferred maintenance nationally — on crucial things such as highways, waterworks and bridges — may exceed $1-trillion. The plan falls short on financial discipline too. Many aspects of the proposal — such as its commitment to Davis-Bacon rules on wages paid to government contractors and “Buy America” provisions limiting use of imports — raise costs, and do so deliberately.

It’s essential to ensure the investments Biden favours are made as efficiently as possible and don’t divert resources from needed repairs, compounding the deferred maintenance problem. /New York, April 4