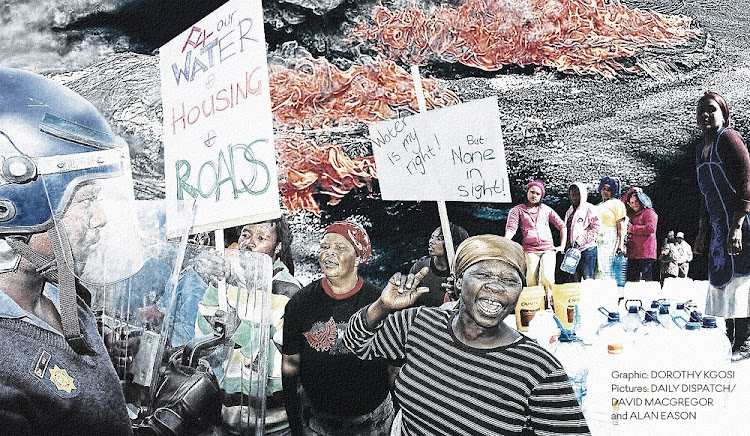 Makhanda in the Eastern Cape, formerly known as Grahamstown, has been without water for weeks. Residents’ hopes for relief lie not with municipal workers, or nationally or provincially deployed expertise, but with the fleet-footed non-governmental organisation Gift of the Givers.

Being abandoned by local government is likely to be of little surprise to residents of the Makana municipal area, who took legal action in 2019 to prompt provincial intervention to try to ensure that constitutional service delivery obligations are met.

The Eastern Cape government resisted the action and continues to appeal against the judgment on the basis of a “floodgates” argument: to accept that intervention were needed in Makana would have to apply to many other municipalities in the province.

Such an astounding admission is an indictment not only of local government but intergovernmental oversight as well, as residents of other Eastern Cape municipalities (such as Enoch Mgijima) threaten similar court action to spur a response to deep-seated municipal failure.

Desperate residents in other provinces have gone further than trying to short-circuit intergovernmental oversight. In Kgetlengrivier, in the North West, residents have won the right to deliver water services directly. Some exasperated Johannesburg residents have begun to repair potholes themselves, while the threat of rates boycotts builds up in the background in many other communities.

The critical question is whether, with so much municipal failure, local government has lost its legitimacy. There is no doubt that local government is under considerable pressure, not all of its own volition. Covid-19 has placed an extra set of demands on overstretched municipal coffers and oft-floundering employees.

However, failing to recognise these pressures is a significant contributor to the problem. It was disclosed last week that 40% of municipalities have adopted unfunded budgets, despite provincial and national treasuries urging them not to.

Of greatest concern is that in many instances Covid-19 pressures are compounding failures in municipalities that have been floundering for years. In a number of cases the pandemic is proving to be the proverbial straw that breaks the camel’s back. (Consider how it exposed Amathole’s bloated salary bill, for instance.)

There are signs of dysfunction everywhere, evident in many clear symptoms:

Litigation
It is not easy for residents to take on municipalities and provincial governments; it requires organisational and financial resources to support legal strategies and cover expenses.

Yet cases are pursued not only in the Eastern Cape (Makana and Enoch Mgijima) but in many other municipalities across SA, such as Mamusa, following Kgetlengrivier in the North West. Most recently, residents of Thaba Chweu, the site of raging protests, have been looking to take over service delivery and problematic Eskom debt after appeals to provincial authorities elicited the suggestion to engage with a clearly failing municipality.

Protests
Service delivery protests are not new, but despite being constrained by lockdown regulations they appear to be resurfacing as an outlet of unhappiness. This might be expected after a period of massive social pressure, echoing Black Lives Matter protests and those against violence against women in London at the weekend.

The great risk is that areas of significant dysfunction are prone to the largest, sustained and most violent protests. Protests have understandably occurred in municipalities such as Makana, where Gift of the Givers is providing — at its own cost — Jojo tanks and infrastructure to pump water back into long-suffering residents’ taps.

Rates boycotts
These are official (as contemplated by some residents in Msunduzi or organised in Cape Town’s Sea Point last year) or take place at an individual level. Either way, one would be hard-pressed to justify residents, like those of Makana, being compelled to pay rates. (Makana collection levels are reported to have dropped from 70% to 55%.)

Grumbling and threats of boycotts are increasingly common, as service delivery (such as the clearing of verges or filling of potholes) falter during lockdowns. While rates boycotts are typically quashed by suspending individual services or obtaining court orders, even a short-lived boycott can be enough to financially cripple a municipality.

Alternative service provision arrangements
Whether carried out by residents (as at Kgetlengrivier), non-governmental organisations (Gift of the Givers) or in private arrangements (evident in the meteoric rise of solar energy for residential and industrial use), local government failure is being sidestepped by pursuing alternative options.

Ultimately, this is the worst possible outcome for local government and intergovernmental oversight, because they become irrelevant. The greatest concern is that in many municipalities it will widen income inequality and opportunity, with the wealthy paying for their own private access to services (already seen in private health care, education and security arrangements), removing the government’s ability to ensure equitable access to local services through cross-subsidisation and leaving the most vulnerable at the mercy of charitable organisations.

Traditionally, public finance theoreticians fear an unsustainable uptick in spending in the year preceding elections as elected officials try to woo voters by rolling out projects. Curiously, this has not been observed in local government in SA, and especially not in the latest election cycle where elected officials appear instead to be battling internal factionalism and regional pecking orders. Party dynamics come before public accountability. Many local politicians seem to remain deaf to a telling placard in Enoch Mgijima: “Service delivery for voters not friends.”

How will this translate in local elections later this year and, most pertinently, will voters turn away from those political parties in control of failing municipalities? This is unclear, especially given the dearth of a strong, viable opposition in most of these municipalities. In addition, the appeal of opposition coalitions is likely to have been tarnished by the stuttering performance of major coalition-led governments such as Tshwane, Johannesburg and Nelson Mandela Bay.

The situation may open the way for independent candidates, especially where civic bodies have raised their profile through court action, but this is likely to be only a fringe phenomenon. Most to be expected are lower turnouts as many voters throw up their hands in despair, which could be worsened by Covid-19 concerns.

The opening of the floodgates of dysfunction suggest the district development model of supporting flailing municipalities through shared skills deployment under a unified vision for regions needs urgent extension beyond the three pilot sites, before municipal dysfunction completely undermines developmental local government.

• Heese is Municipal IQ’s economist and Allan its MD.

Eskom may yet prove the downfall of the country unless something is done and done quickly — but despite the meetings and proposals and input, the ...
Opinion
9 months ago

Regulations shift more responsibility for waste on to producers

Regulations will cover sectors including electrical and electronic equipment, lighting, paper and packaging
National
9 months ago
Next Article