Preventing viral spread between people limits chances for Covid-19 to mutate, and protects us from infection with any new, highly transmissible variants that may not yet be documented 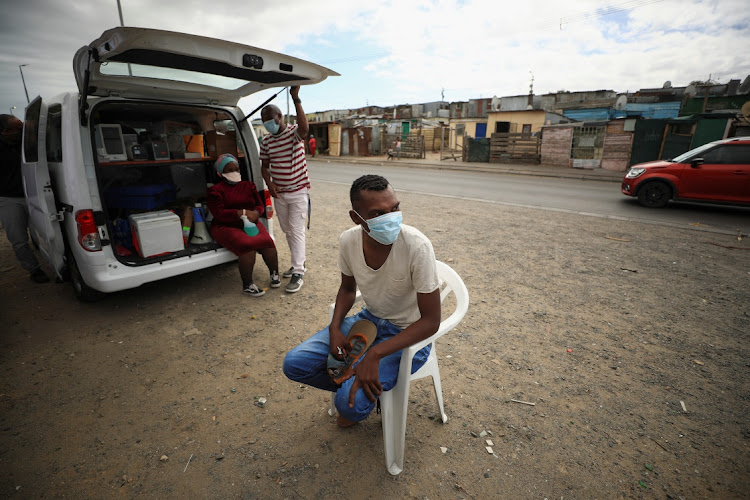 Deon Yanga waits to be tested for tuberculosis at a mobile clinic in Gugulethu township near Cape Town on March 26 2021. Picture: REUTERS/MIKE HUTCHINGS

Will SA experience a third wave of Covid-19 infection? If so, when and how severely? The country experienced the first wave in April 2020, with the Western Cape affected first, which abated by September 2020, with Gauteng being the last province to settle. A devastating second wave followed three months later linked to the migratory patterns of the holiday period and, as the evidence demonstrates, spurred on by super-spreader events in late November and early December. Now we face concern that a third wave could hit us sometime after Easter, coinciding with autumn and potentially compounding the morbidity of the annual flu season.

In recent weeks Covid-19 cases have spiked across Europe to above the risk threshold of 10 new infections per 100,000 people per day. Several European countries — including the Netherlands, Italy, Germany, Greece, Poland and France — have returned to lockdown measures as third waves of infection have set in, fuelled by the highly transmissible B117 variant (originally detected in Britain). Newly imposed lockdown restrictions in Italy, imposed from March 15, require residents to stay strictly at home over the Easter holiday.

This global experience is concerning to us in SA and increases our concern of a third wave of Covid-19. Its scale and timing are unclear, and depend on our behaviour. We are in control of the outcome of this infection trajectory. It is up to us and, as per the unequivocal evidence that is now published and universally supported, will be determined by:

Reinfections are a significant risk, one supported by recent data insights.

Over the course of the first and second waves of Covid-19 infection more than 1.5-million people in SA have been diagnosed with Covid-19 and more than 52,000 Covid-19-related deaths have been recorded. However, given that over 80% of infections are either asymptomatic or mildly symptomatic, these figures significantly understate the full extent of the outbreak.

The SA Medical Research Council has recorded more than 150,000 excess natural deaths since March 2020, suggesting that the Covid-19 death toll is significantly higher than what has been recorded. Actuarial analysis based on this data, which is further corroborated by recent seroprevalence studies, suggests more than 55% of the population has already been infected with Covid-19.

While this suggests a large proportion of the population will now have some degree of Covid-19 immunity, latest scientific evidence shows that lasting immunity against reinfection is not assured, in simple terms. Despite having been infected previously, there is a strong possibility an individual could be reinfected a second time. This could be aggravated by the continued emergence of Covid-19 mutations — variants that are capable of immune escape, as we have already seen happening in SA and around the world.

What do we currently know?

Emerging from our analysis of 3.7-million medical scheme beneficiaries — 7% of the country’s population — we have derived in-depth understanding of the pattern of Covid-19 infections. The second wave of Covid-19, which occurred over the December and January holiday period, was quite different to the first wave in many respects:

However, there is some good news in this regard. Treatment advances following the first wave meant that, with enhanced care, medical scheme members spent 37% less time in hospital per admission on average. Additionally, while more people tragically died as a consequence of more infections, overall mortality rates did not increase from first to second wave. For clarity, the case fatality rate — the proportion of deaths from reported positive cases — did not change during the second wave.

Three third-wave scenarios: why the Easter break could be a tipping point

Our actuarial analysis forecasts the probability and impact of a third wave in SA in three scenarios:

What determines which scenario wins out? Five paths for SA

It is in our hands to save lives. Our personal behaviour, and that of the people around us, will be a large determinant of which scenario our country experiences. The loss of life described in scenario 3 is tragic and devastating. Let’s work together, keep each other honest and remain prudent as we try our very best as a country to experience scenario 1, and avoid a severe third wave.