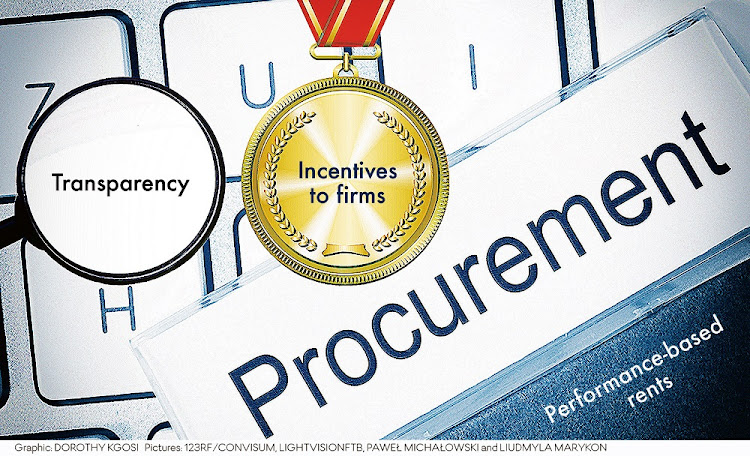 If there’s one thing South Africans agree on it is that procurement-related corruption and maladministration is a curse and we should pull out all stops to eradicate it from public governance, especially when it affects access to public goods such as health, water and sanitation.

However, we should avoid the tendency to attribute all forms of corruption and rent-seeking to BEE legislation and other policies aimed at socioeconomic redress.

Such sweeping generalisations overlook market structure and bureaucratic factors, which shape successes and failures in procurement implementation. The economywide effect of procurement requires in-depth analysis that places BEE in the context of a wider policy mix. For this to occur we need to consider the market structure and distributional framework within which procurement decisions take place.

Procurement debates largely focus on corruption while overlooking the consequences of the distribution of rents on economic reconstruction and development. University of London economic scholar Prof Mushtaq Khan cautions policymakers against this approach and encourages them to rather ask what determines the magnitude and effects of different types of rents and patron-client exchanges.

Furthermore, as journalist and author Pieter Louis Myburgh has attempted, we need to draw strong relational links between procurement decisions, economic restructuring and BEE. However, where we depart from Myburgh is in the conclusions he draws and their implications for policy, for several reasons.

First, we agree that politically connected middlemen displace genuine and nascent black industrialists. However, what Myburgh overlooks is that the challenges of procurement are not confined to narrow perspectives on corruption. They are equally shaped by rigid conceptions of competition, returns to scale and market dominance built into the price mechanism. Especially in our current macro-fiscal moment procurement is focused on best price for value and containing leakage due to corruption. Everyone agrees that we need to get the best price for every rand collected from SA taxpayers and bondholders, but we cannot ignore that this price is an outcome of market structure and scale.

We cannot reduce debates on (over)pricing solely to the economic activities of corrupt syndicates. To do so is to generalise the specific instances of organised looting from the state at the express exclusion of the experiences of nascent and established black entrepreneurs, who lose out on price and functionality in sectors that remain closed to black entrepreneurs without the scale and capital to compete.

Second, SA’s public procurement policy framework cannot be divorced from the need to reduce structural racial inequality. It is not just a transactional sphere of market relations but an instrument for socioeconomic redress, experimentation and development. Rent-seeking, as Khan suggests, is endemic in both developing and developed countries. This observation does not dismiss the social damage caused by corruption. Rather, it lays the ground for a measured conversation on how to reconfigure rents towards development, innovation and industrialisation.

Rents have played a role in catalysing development in transitional societies over the last few centuries. That is why set-asides, employment equity and broad-based BEE prequalification in tenders are necessary. The question is, how do you ensure that the “preference” for black producers is productive and developmental and does not facilitate import leakage, nonperformance and short-term non-productive consumption?

Third, challenges related to personal protective equipment (PPE) access in the country cannot be reduced to BEE supplier failures. The government has attempted to address the issue by forging public-private partnerships, lodging formal trade appeals at the World Trade Organization over stockpiling in developed markets, and supporting local production. It is evident that market structure and political economy factors transcend the misguided emphasis on BEE as the only factor determining the success or otherwise of the supply and distribution of PPEs.

Fourth, we need to approach procurement differently by factoring in long-term policy planning and transforming productive capacity at a local level, where the crisis of social reproduction occurs, made worse by the pandemic. Some examples in water and sanitation are instructive.

The OR Tambo and Alfred Nzo districts in the Eastern Cape, for instance, have a similar profile — peri-urban towns in the middle of wide expanses of villages on uneven topography — and thus require similar sanitation services. In both districts, more than 90% of households have a toilet in their yard, rather than outside the yard or within the home. The district municipality in each case, provides households with ventilated improved pit (VIP) toilets.

A question is how and to what extent these latrines, funded via municipal capital budgets, can unlock local industrialisation. According to the Alfred Nzo municipality, 6,273 such toilets were built in the 2016/2017 financial year, largely in Mbizana, Matatiele, Ntabankulu and Umzimvubu, at a cost of R59.22m, an average cost of about R9,400. In the same year, the OR Tambo district budgeted over R176m for the provision of 16,000 VIP toilets. In that year, the backlog of VIP sanitation stood at 74,835, or about 23% of all households in the area.

One would think that if one procures such toilets for different wards every year there would not be a need for “price discovery” every time. There should be potential cost-savings if such procurement occurred in a manner that leveraged government’s bargaining position as a major buyer of latrines.

It may require a long-term agreement with a cohort of suppliers of the various components that go into such toilets (or even some horizontal arrangements between competitors), incentivising these firms to make the necessary investments in plant, machinery and labour to fulfil this need. Now, our procurement system incentivises the parcelling out of these projects in smaller, more costly, engagements for compliance purposes.

What we are suggesting is not some “boetie-boetie” arrangement that benefits those with proximity to political power, but rather transparent and performance-based rents and incentives to firms that can meet these recurrent procurement needs, and in so doing build an industrial ecosystem of firms “seeded” through state capital spend.

Firms in such arrangements would be required in an agreed compact to invest in industrial learning, firm productivity, transformation and production targets aligned to the backlog eradication programme. Further, there might be obligations for skills transfer to local co-operatives for pit maintenance and desludging in the outer years of the build process.

We must recognise that the building of the roads, toilets and other infrastructure we need requires the honing of market relationships and structures — and this takes time and patient capital. The patient capital of institutional funds like pensions will only be crowded in if we are able to link the activities of upstream component manufacturers and downstream contractors to public buying decisions, beyond the immediate three-year spending horizons of state entities.

• Cawe and Mabasa are co-editors of the Mapungubwe Institute for Strategic Reflection publication, “Beyond Tenderpreneurship: Rethinking Black Business and Economic Empowerment”.

Condolences are not accountability, and the latter is a cornerstone of working democracy

Amid concern over SA yet optimism too, investment is hobbled by continued uncertainty
Opinion
1 month ago
Next Article

JONNY STEINBERG: A kick in the face of the poor after failing SA with vaccines

JONNY STEINBERG: A kick in the face of the poor after failing SA with vaccines