Condolences are not accountability, and the latter is a cornerstone of working democracy 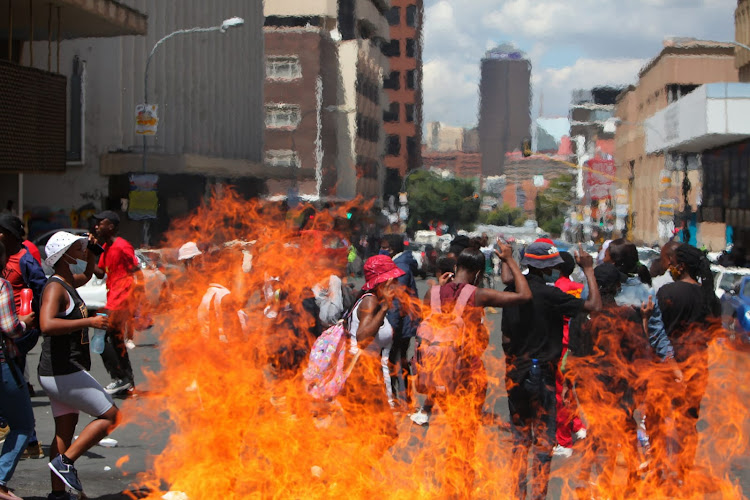 Last week saw nationwide student protests. It was a grimly instructive time, although students were not necessarily learning.

The annual carnival whereby students demand “free, quality, decolonised education for all who qualify” led to the tragic death of an innocent bystander, Mthokozisi Ntumba, a 35-year-old father of three and recent masters graduate.

Ntumba’s death is grotesquely symbolic. It shows the contradictions built into many students’ demands and, more broadly, the endemic contradictions within our society. Ntumba was a government employee. Attempts by government to control student protest were the immediate cause of his death: he was, in effect, killed by his employer.

This should resonate. Underwriting — the word’s link to a “guarantee,” to insurance, is pertinent — Ntumba’s death were actions taken by a government whose rallying cry is “A better life for all”. Disorderly actions by public order police cut his life short. Ntumba was killed by a force that was there to protect him, and us.

Wits student representative council president Mpendulo Mfeka assures us that Ntumba “did not die in vain.” Police minister Bheki Cele claimed “someone, for me, just went crazy”. Finance minister Tito Mboweni tweeted that “there was no student that was killed”. He later apologised.

But Mboweni’s comment should be placed alongside an explicitly unapologetic statement on social grants: “There’s no social contract that says every year there must be x amount of increase, so there’s no need to be apologetic at all.”

Communication and community. Ntumba’s death, the student protests, officials’ comments about these, are the latest evidence of a shredding of democracy and a collapse of solidarity, care, sympathy and mutual support. “Condolences” are expressed by everyone from the president to the leader of the Wits SRC. But condolences are not accountability, and accountability is a cornerstone of a functioning democracy.

Increasingly, there is no social contract, period. All the rhetoric about shared commitments to democratic values cannot mask an increasingly atomised society. Throughout his many TV interviews last week, Mfeka insisted his supporters were motivated by an interest in “poor and working class students, black students.” I saw not a white face during my hours of watching the rolling TV coverage of the “story.” Nor did I see any faculty members. Of course, there was no social distancing, or proper wearing of masks. This lack of care for self and others is grimly epitomised in the death of Ntumba.

Mfeka insisted that he was acting as SRC president, not as a “member of any political organisation”. From the 35,000 or so students registered at Wits, those on the streets constituted less than a tiny minority. SRC elections barely show a turnout in double figures. Claims to “represent” the student body are administratively correct, but lacking in substance.

Accountability is compromised. This extends to our electoral system itself. “Answerability,” fundamental to political democracy, is sabotaged by cadre deployment and the party list system. The divisions so manifest within the Wits student caucus, where “leaders” scrabble for personal advancement – Mfeka calls it “ego” – is a minute version of the absence of accountability and presence of rampant self-interest – one word for this is “corruption” – in national politics.

The current rhetoric insists that university education is a way out of poverty for “the poor and working class.” Ntumba’s death might symbolise something different. Admission and success at a university, especially in the current economic and political dispensation, do not guarantee upward social mobility.

Contra the socialist rhetoric of many in the fee-free tertiary education movement, their (understandable) aim is to be recruited into the middle classes. They don’t seem to see that their “demands” add to the commodification of education, culture and themselves.

They also don’t see – or don’t care – that their “demands,” and “our” government’s response have further impoverished the poor. Both personal income tax and VAT were increased as a direct result of former president Jacob Zuma’s announcement that there would be zero fee increase in 2016 and fee-free education from 2018.

VAT affects the poor most dramatically. The increase in income tax reduced surplus spend for many, further slowing economic growth and savings. The inability of the “missing middle” to pay for fees cannot be separated from these dynamics, and is only exacerbated, not caused, by Covid-19. The consequences on the poor and middle classes are severe.

If one had a truly competent and accountable government we wouldn’t have the annual circus that is the fees protest. Government would not make promises it couldn’t or wouldn’t keep. In November 2017 the Heher Commission (belatedly) released its findings: fee-free education was “not possible in the foreseeable future”. Zuma’s immediate response, on December 16  2017, was to announce fee-free education. On December 11 2021, higher education and training minister Blade Nzimande tells us cabinet has decided there must be research into a “sustainable mechanism” for tertiary funding. Do the maths.

Fee-free education, in its current form, adds to the catastrophic thrust to commodify education. As it stands, “free” education cannot be “quality” education. It has consequences for programmes and personnel. The business model demands “efficiency”. Administration/bureaucracy – largely inefficient — multiplies, and academic staffing declines or freezes.

None of this features in the rhetoric about fee-free education. Discovery, interest, passion, excitement, all dwindle or disappear. The chief irony is that “radical” student demands recruit students into the bourgeoisie and a “teaching” model that fosters obedience and conformism. The idea of education as a public good in itself, disappears.

Ntumba’s death was a waste of life. Wastage is found in the university failure rates. Using the 2010 intake, a government report of late 2019 showed that only 22% completed their degrees within three years. By 2016 only 56% of those registered in 2010 had completed their three year degree. Access and fees are but two elements of an equation. Apply the business model to these figures and substantial numbers of students paid for by our tax revenues should not be admitted.

Each point raised here requires elaboration. However, what becomes clear is that the emphasis on fees, while fundamental, is tragically inadequate.

Sasco, ANC top six agree in principle that universities should not exclude students with debt from registering
National
6 months ago

That said, protesting students claim their right to education takes preference over other basic rights, so the government needs to weigh things ...
Opinion
6 months ago