Aid package of $1.9-trillion is among the most expansive legislative achievements in decades 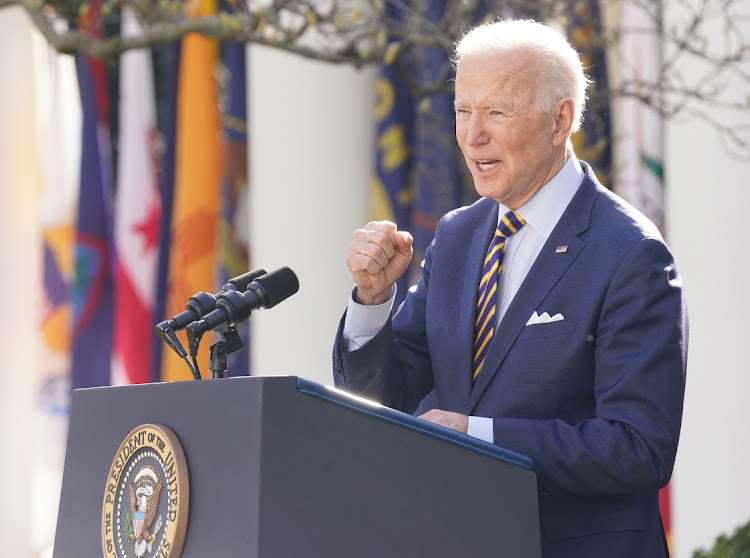 US President Joe Biden speaks during an event in the Rose Garden of the White House in Washington, D.C., on March 12 2021. Picture: JIM LO/EPA/BLOOMBERG

US President Joe Biden made it clear that he wanted to move fast and go big to deliver emergency aid to a nation reeling from the coronavirus pandemic. On Friday he realised this goal with the signing of the American Rescue Plan, a sweeping, $1.9-trillion aid package aimed at rescuing the nation from its pandemic slump.

This is an early and impressive political win for Biden: he pushed for a $1.9-trillion deal, and he got a $1.9-trillion deal that largely follows the contours he proposed. Far more important, this is a big win for the American public — especially those of modest economic means.

The legislation has the potential to cut poverty by a third and reduce child poverty by more than half, according to an analysis by Columbia University’s Centre on Poverty and Social Policy. Black and Hispanic Americans are expected to see the largest benefit.

It is being characterised by fans and critics as among the most expansive and progressive legislative achievements in decades. And the package is ambitious, providing billions for coronavirus tracing, testing and vaccination efforts as well as another round of cash relief for individuals and money for child-care facilities, schools, transit systems, restaurants, rental and mortgage assistance, debt relief for minority farmers and funding for small-business loans.

Not everyone is a fan of the plan. Not a single Republican in either chamber voted for it despite its broad public support. Republicans have denounced it as too expensive and too unfocused. They also complain that Democrats shut them out of the legislative process — that for all of his big talk about bipartisanship, Biden barrelled ahead with only the support of his own congressional team.

The Biden administration is betting that most Americans care less — if at all — about process than about product. It’s not a perfect bill. There will be bloat and inefficiencies. But the president’s unshakeable position — backed by recent history — was that it was better to go too big than too small. No-one on his team wanted to repeat the mistakes of the 2009 economic stimulus, now widely seen as having been too meagre.

Big legislative wins are rare. Democrats have earned a victory lap for doing just what voters sent them to Washington to do. /New York, March 10