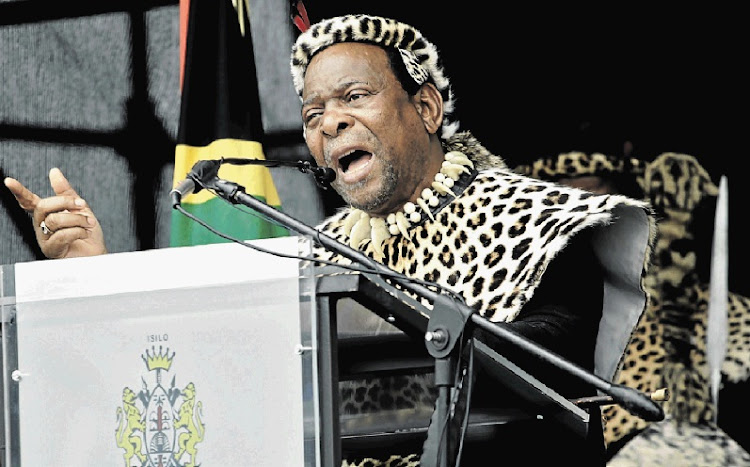 Since taking over in 1971, just a year after the establishment of the Zulu Traditional Authority, King Goodwill Zwelithini’s most important achievements as the leader of the Zulu nation was that he remained a tall figure in promoting education and abstinence, among young girls in the main.

He was a colossal fighter against the spread of HIV/AIDS. He did this by reviving the reed dance ceremony while working closely with the National Aids Council.

He remained a stark unifier by advancing Zulu culture which urged the AmaZulu to embrace cultural practices with pride.

He managed to unite the warring factions in the province and outside. He led in a manner that contributed to development and growth in the cultural tourism sector in the region by organising ceremonies such as the annual King Shaka Memorial as part of the rich history and heritage of the province of KwaZulu-Natal as a whole.

Additional to that was the commemoration of the historic battle of Isandlwana.

As a symbol of Zulu culture and authority, the king was able to rebrand the Zulu national posture to fit well within the changing political landscape in SA after the demise of apartheid while modernising the traditional leadership sector.

While other African states were ravaged by devastating ethnic wars, the king rose above and avoided to set Zulu people on a path of war against Xhosa people at a time when the ANC/IFP conflict looked as if it was turning itself into ethnic conflict between the two groups during the first half of the 1990s.

In doing so, he prevented bloodshed among many South Africans even though his traditional prime minister was a leader of one of the parties that were involved in the political turmoil at that time.

He managed to defeat sentiments that he was there only to advance and promote a narrow Zulu nationalistic agenda. He threw his weight behind elected leaders without worrying about political affiliations and ethnic backgrounds.

No-one could forget when the first democratically elected president, Nelson Mandela, chose to take the Zulu king with him to jointly greet a cheering crowd at FNB stadium on the day when the senior national soccer team lifted the prestigious Africa Cup of Nations trophy in January 1996.

The walk with Mandela in front of a packed stadium cemented the tone of national unity that Nelson Mandela hoped to use as a tool of national renewal of the country in the postapartheid era.

His legacy as a traditional leader is that he refused to be drawn into ugly political debates and antagonism. Also, as if some of his powerful forebears such as King Shaka and Cetshwayo, he commanded a lot of following and respect among his adherents.

He leaves a legacy of a traditional leader who was not shy to speak strongly and to stand by his views on any issues with the view to be a voice of the marginalised groups.

He spoke out against gender-based violence and the barbaric and brutal onslaught that was meted out against children and the aged.

He will be remembered as an amiable character who presented himself smartly dressed without compromise when appearing on any public platform.

The king was influential in driving positive messages and maintaining cordial relations with other kingdoms in the southern hemisphere. He appeared as an ambassador of promoting economic growth without tapping negatively into the political space.

He was able to win hearts of political leaders who held contrasting political views. He did not fail to mediate even on instances that could plunge the region into anarchy.

For instance, he was able to make the former president, Jacob Zuma, broker a peace deal with Joseph Kabila of the Democratic Republic of the Congo, thereby preventing a political stand-off that would not pass without adversely affecting people at grass root level. He was therefore a powerful mediator on matters that affected the whole country and beyond.

His death means that South Africans have been robbed of an exemplary leadership. Many young people were yet to cut a leaf from him when it comes to observing the value of living a life free of alcohol and substance abuse.

It is a loss of a champion, of a figure who lived an upright life.

The king’s death deprived many South Africans of a chance to learn the means of living along traditional lines without allowing tradition to collide with different ingrained religious beliefs.

The king was by no means a controversial figure. He was not a populist. He applied his mind meticulously before making any statements even on sensitive issues and defended himself well in case facing serious questions from certain sectors of society.

He came out clearly on the land debates and the influx of foreign nationals in SA. He did not capitalise on the weaknesses of individuals who did not appear to truly understand the depth and strength of arguably the biggest kingdom in Africa, that he led. For example, he did not even comment on the derogatory comments against him made by a TV personality, Phat Joe, on national television around 1999 or 2000.

Presidential summit on land planned for 2020, Ramaphosa says
National
1 year ago
Next Article

ANC to provide land to those who work it and need it, says Ramaphosa

FREE TO READ: How communities are defying the Ingonyama Trust’s land grab

ANC to provide land to those who work it and need it, says Ramaphosa

FREE TO READ: How communities are defying the Ingonyama Trust’s land grab