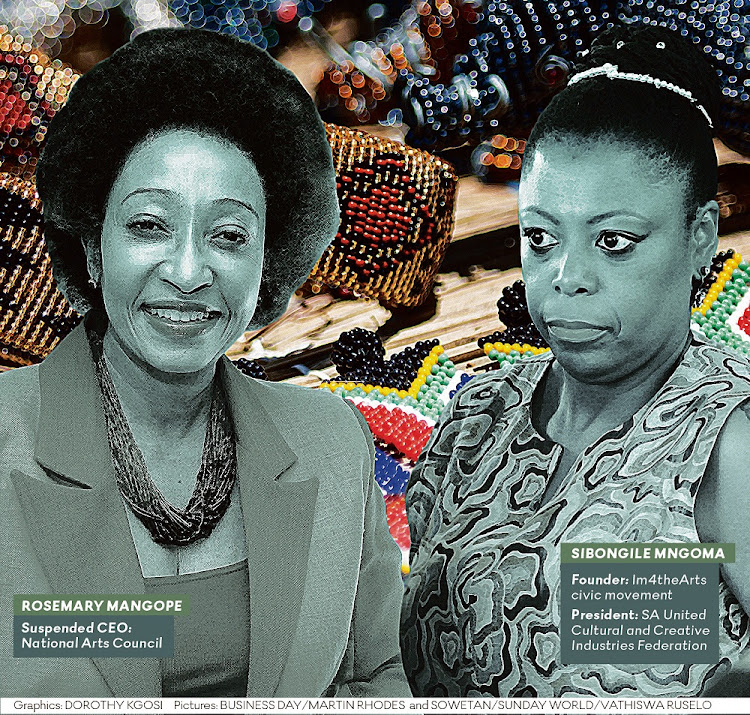 In November 2020, the Presidential Employment Stimulus Programme was announced with the promise to inject R500bn in grants across the country to promote innovation and reignite job opportunities.

Though the creative cultural industries contribute R75.3bn to SA’s annual GDP and employ 1.3-million people — 7% of total employment — they were allocated only R1.2bn.

Culture is at the heart of SA society and has been a fountain of inspiration in these difficult times, yet the sector is among the worst affected by the lockdowns. The presidential stimulus grants were therefore crucial, yet due to non-spending, the Treasury took back half the money. The balance was disbursed via the department of sports, arts & culture to its funding agency’s National Film and Video Foundation and the National Arts Council (NAC).

The NAC received R300m and allocated this to various projects, completing the process of signing contracts and issuing grant letters by the end of January 2021. Many arts organisations started their rollout of projects, but these were halted when the NAC breached the contracts through non-payment.

The NAC held an administrative meeting on February 24 to explain. In the meeting, board “leader” Sipho Sithole announced that “we must spread this little budget graciously so that everybody adjudicated has got bread on the table”. Yet the board had decided to ignore the government’s Batho Pele principles of consultation and transparency, and unilaterally reduce payments on grants that had already been approved.

The justification was the awarding of an additional 761 grants, which the council said would create a further 7,000 jobs. This was described by Sibongile Mngoma, founder of the Im4theArts civic movement and president of the new ground-up federation the SA United Cultural and Creative Industries Federation, as “creating more problems to solve a problem”.

To sustain these additional grants, the board had decided to reduce funding by 60% for the 613 existing grants, which it still expected to create the originally forecast 14,000 jobs. Arts organisations immediately picked up the inequity and lack of logic in this decision and suggested that the best solution would be to halt additional funded projects to ensure no further grants were promised until the NAC’s existing obligations had been met.

However, Sithole responded by offering arts organisations two choices: “sign the new contracts” or “take us to court”. In the same meeting, NAC CEO Rosemary Mangope said: “As we entered this initiative we knew that we didn’t have the capacity but we also asked ourselves the question, if not us, who?”

It did not go unnoticed that Sithole had been chief of strategy at the Passenger Rail Agency of SA, where he was among a group of employees accused of “improper, corrupt, fruitless and wasteful expenditure”, as was reported by the SABC at the time. Sithole received a 12-month suspended sanction after being found guilty of lesser charges related to maladministration and contravening company policy.

To date the NAC has not responded to questions, but on February 28 it released a statement saying Mangope and CFO Clifton Changfoot had been suspended. For those in the know, this was no surprise. Mangope has been at the centre of the scandal since being appointed CEO in 2013.

In April 2018, the Gobodo forensic investigation into alleged conflict of interest and irregular funding awards, which focused on irregular awards to members of the Mangope and Kerzner families between 2013 and 2016. The report resulted in a disciplinary hearing in 2018 where Mangope faced 13 charges of gross negligence.

This process was, however, criticised as ineffectual as it failed to analyse the mechanism that sustained the irregular funding — an “expired projects and surplus grants” scheme that was signed into NAC policy on May 15 2015. This policy allows for the NAC to make applications on behalf of beneficiaries without their consent, and for funds to be withdrawn from organisations for various reasons and repurposed for “other strategic NAC initiatives”.

A driving force behind the exposé of the abuse of this policy has been the SA Roadies Association, which discovered in 2015 that the NAC CEO had submitted an application to the executive committee for partnership funding using the association’s name without its knowledge or consent.

The roadies complained to the ministries of arts & culture and finance, the Treasury, the auditor-general and the public protector in November 2017. The public protector issued a report on June 15 2020 that found “the implementation of the policy is susceptible to manipulation, since some employees could recommend their relatives, families and/or cronies to be funded through the policy” and that it violated the constitution as well as the Public Finance Management Act, among other things.

In July 2020, the roadies filed a fraud and corruption complaint against Mangope with the Hawks.

The inability of the governance structures in SA to respond to the ongoing problems at the NAC has shown that the problem is far greater than the council. The sports, arts & culture minister, auditor-general and the Treasury should all be called to order for what has occurred at the NAC on their watch.

Arts organisations could play a greater role in other departments such as trade & industry, education, labour and small business. The Presidential Employment Stimulus Programme may be better served releasing the remaining R600m for arts through these departments.

Correction: March 12 2021
The National Arts Council CFO who was suspended in February was Clifton Changfoot, not his predecessor, Dumisani Dlamini, as was incorrectly reported.

• Douglas is an author and cultural activist.

While Rishi Sunak is splurging, Tito Mboweni’s cuts might seem like austerity — but that would be misleading
Opinion
1 month ago

Bureaucracy is standing in the way of economic growth