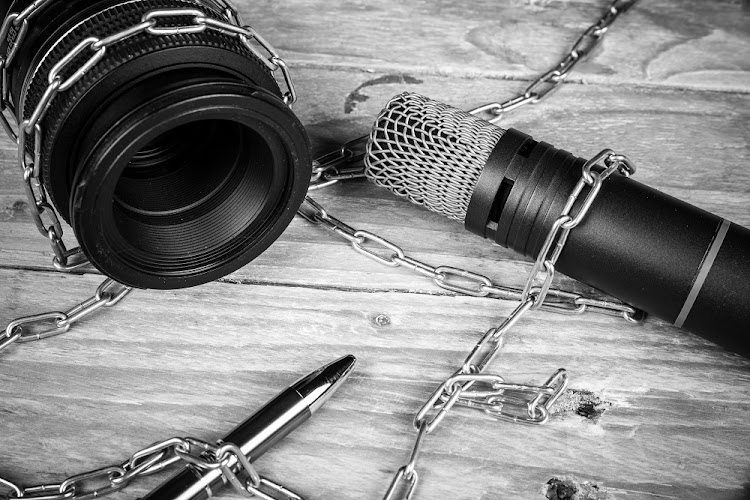 “Please, please, sorry, NTV please ... I am sorry …,” pleaded Geoffrey Twesigye, a journalist with NTV Uganda, as armed military policemen chased him down and beat him and at least 10 other journalists in Kampala, Uganda’s capital.

The journalists were attempting to cover the presentation of a petition to the UN office of the high commissioner for human rights on February 17 concerning opposition politician Robert Kyagulanyi, popularly known as Bobi Wine. A Kampala metropolitan police spokesperson described the gathering as an illegal assembly that violated the government’s Covid-19 guidelines.

Even before Covid-19 many African governments barely tolerated free speech or media freedom, basic pillars of freedom of expression. Authoritarian leaders have exploited measures to limit the spread of the virus to shut down critical and independent voices, including activists, journalists, media outlets and opposition politicians.

International human rights law permits measures that could curtail certain rights in a public health crisis so long as they are provided for by law, are necessary and proportional to the threat, and are imposed without discrimination. Yet a number of African governments have enacted measures with broad and vaguely worded enforcement powers that go beyond human rights law restrictions. Countries with historically abusive security forces have interpreted these powers as permission for unlawful mass arrests, beatings and excessive use of force, including teargas, water cannons, rubber bullets, and in some cases live bullets, to disperse people.

Authorities in Somalia and Rwanda have arrested, beaten and detained journalists, bloggers and others for criticising government responses to the pandemic and reporting citizens’ complaints. In Guinea, opposition politicians complained that ruling party events went ahead while opposition-led political gatherings and protests were disallowed.

Similar complaints of double standards were raised in Uganda during campaigning before the January 14 national elections. Security forces cited alleged violations of Covid-19 regulations as reasons for forcibly breaking up peaceful rallies of opposition presidential candidates, Kyagulanyi of the National Unity Platform and Patrick Oboi Amuriat of the Forum for Democratic Change party. Police repeatedly arrested and detained both candidates and their supporters and shot and killed at least 54 supporters protesting Kyagulanyi’s detention and injured 45.

Africa has the world’s lowest internet penetration, but social media has also become a battleground for free expression. That mobilising and organising street protests often starts online is clearly not lost on Africa’s repressive governments.

One of the most egregious cases was in Tanzania. On July 7 the authorities suspended the licence of Kwanza online TV for 11 months for posting on its platform a US embassy advisory about Tanzania’s Covid-19 status. The government had passed new regulations that month prohibiting sharing online content on “the outbreak of a deadly or contagious disease” and about planning demonstrations and protests.

These laws have had a chilling effect on sharing critical life-saving public health information. Despite anecdotal reports of coronavirus infections and deaths — including of Seif Sharif Hamad, first vice-president of Zanzibar on February 17 this year — the country’s leadership only admitted two days later that the disease existed. This was a major shift after months of insisting, as the president did in June, that because of answered prayers the country was free of the virus.

Other cases remain unacknowledged and the authorities say vaccination is unnecessary. According to media reports, on January 21 a school in Moshi, Tanzania, retracted information on its website about a Covid-19 infection in the school after a regional government official publicly rejected the school’s claim.

Elsewhere on the continent anticorruption activists and journalists who challenge government use of donated or borrowed funds to tackle Covid-19 and ensuing economic challenges have not been spared similar violent crackdowns.

In August Kenyan police fired teargas and arrested 12 activists for protesting against an alleged lack of transparency in the management of Covid-19 funds. A Kenyan court ordered the National Media Group to take down the story that triggered the protest. The journalist who wrote it, Dennis Okari, allegedly went into hiding after he was named in a libel case against the group.

Authorities in Zimbabwe arrested, detained and charged with “inciting violence” anticorruption activists Hopewell Chin’ono and Jacob Ngarivhume on July 20 for exposing corruption in the award of Covid-19 related contracts and calling for protests. Security forces arbitrarily arrested, detained and tortured more than 60 people who participated, or their family members.

Regular reminders by Africa’s human rights institutions to governments about their obligations to ensure freedom of expression and access to information about Covid-19 are important but have had little effect.

If Africa’s impressive human rights laws are not to remain empty words devoid of authority, leadership at regional and national levels need to step up efforts to increase the cost to repressive governments of flagrant violations, including by publicly sanctioning abusive members of security forces. Twesigye, and others who have been denied their rights, deserve at least that much.

The social change and transformation required have to embrace degrowth as a positive social development, writes Ismail Lagardien
Opinion
9 months ago

Who needs local government if it can’t get anything done?

Community groups are seeking legal advice on withholding rates, after all, why pay if your money is merely going to be ‘eaten’?
Opinion
9 months ago

A social compact is all well and good, but we need to get down to basics