Who needs local government if it can’t get anything done?

Community groups are seeking legal advice on withholding rates, after all, why pay if your money is merely going to be ‘eaten’? 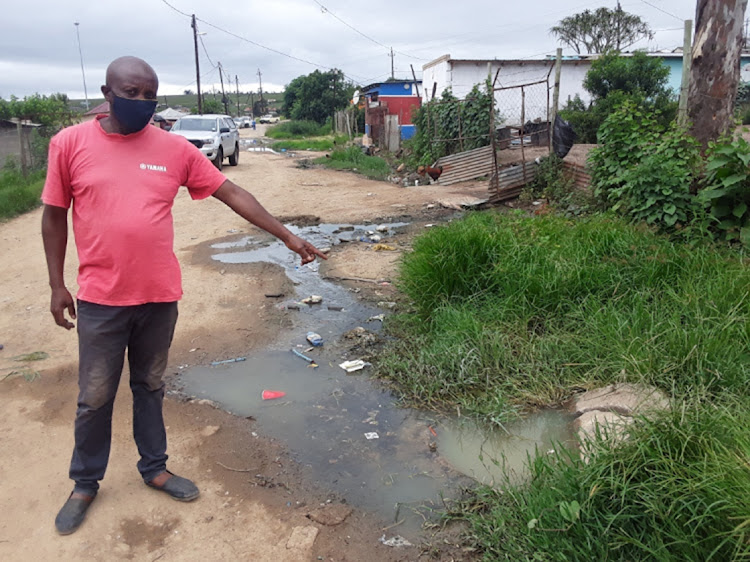 Ngangelizwe resident Unathi Madalane points to a blocked sewage pipe that has been overflowing since November 2020. Picture: SIKHO NTSHOBANE

A sea change is under way at local government level, one which all political parties had better watch out for. Citizens’ groups are taking control of municipal functions, some with the support of courts, and are delivering services in areas where they are collapsing.

The trend is being driven by voters who are sick of corrupt politicians — as every poll makes clear. For example, a poll run in late 2019 showed growing mistrust in political parties and politicians. There was a deep-seated belief that the country was headed in the wrong direction. More than 80% of respondents thought corruption was increasing.

The sad state of local government has been lamented by many, not least the late Auditor-General Kimi Makwetu. He noted in 2018 that “on average, almost 60% of the revenue shown in the books will never find its way into the bank account”, raising the alarm that such rampant corruption and incompetence would inevitably result in a growing revolt against rates and taxes.

The consequence has been precisely that — talk of withholding rates and taxes, and going further to simply do what has to be done but which the government seems incapable of doing. The gatvol tipping point seems to be upon us.

It is against this background that SA will have local government elections, currently scheduled for August.

Soon the media will be replete with pundits talking about the low turnout that generally affects local elections. Some will touch on the way all parties are commonly “punished” at local rather than national elections, others will talk to the winners, losers and likely coalition partners. All this will be pretty predictable. Some of it may even be correct. But something more subterranean and interesting is happening.

There has been growing discontent with many local authorities. In some this has gone as far as concerned citizens successfully calling for a municipality to be dissolved and put into administration, as happened in Makhanda in the Eastern Cape in 2020.

Elsewhere, citizen groups have found other ways of simply taking matters into their own hands. Instead of just moaning, people are taking action.

Events in Kgetlengrivier local municipality, in the platinum-rich North West, have shown just how serious the situation has become. In December 2020, in what was described as an “astonishing judgment”, a judge in the North West High Court ordered the imprisonment of the municipal manager of Kgetlengrivier for 90 days. The sentence was suspended on condition that sewage spilling into the Elands and Koster rivers be cleared up.

Remarkably, the judge also gave the residents’ association the right to take control of the area’s sewage works, and to be paid by local and provincial governments for its efforts.

The local residents duly took over the job of clearing sewage, successfully.

The legality of this will be tested on appeal, and may well be overturned by a more risk-averse higher court. But the seeds have been sown, and national government seems to agree — national ministers were respondents in the case, and did not appeal. And the ANC had better be careful — most of the places where these events are taking place are in ANC-held municipalities.

Take events in Harrismith in the Free State, were residents also took over fixing the sewerage; or Umdoni municipality in Scottburgh, KwaZulu-Natal, where residents are threatening to stop paying rates. In Graaff-Reinet in the Eastern Cape, residents have objected to increases in municipal rates, frustrated by the broken sewerage system and other municipal services.

This could be construed as anarchy. And it may well be. But anarchy is often criticised and used as a pejorative — a “descent” into anarchy — rather than analysed or understood as one possible “ascent” from a corrupt and coercive politics. It means something along the lines of a belief in abolishing all government, and organising residents on a voluntary, non-coercive, co-operative basis.

And this is happening, across the country, from withholding rates and taxes to taking over key service delivery functions.

South Africans may be leading themselves from the trough of corruption to something much more interesting, contested and dangerous to a young democracy. When an entire sphere of the state is close to dysfunctional and can have its power, functions and revenue turned over to citizen groups because of incompetence or malfeasance, something is very seriously wrong.

Trust in all levels of government is close to rock bottom, as is trust in political parties. In the latest Ipsos poll, no party was trusted by a third of its own supporters. The opinion voters have of politicians could not be lower, matched by pessimism: less than half of respondents felt the country was heading in the right direction.

The final straw may well have been watching with revulsion as the most politically connected stole money meant for life-saving Covid-19 protective equipment.

Talk of withholding rates and taxes has now become commonplace. Community groups have been seeking legal advice on withholding rates and are sharing legal opinions about the issue. Why pay, if your money is merely going to be “eaten”? This is now backed up the North West High Court ruling. Who needs government?

If pollsters want to understand where SA is going, it seems that measuring political parties and their campaigns is perhaps necessary — much as a visit to the dentist is necessary — but it may miss the point.

They should be polling those who no longer care about local government, and who see themselves as constituting a more legitimate and, frankly, competent part of the governance infrastructure. And while taps run dry, power cuts continue due to corruption or incompetence, and no politician has yet been jailed, who is to say they are wrong?

• Everatt is professor of urban governance at the University of the Witwatersrand.

• This article was first published in The Conversation.