Terrifying citizens with overwhelming statistics is no help during a pandemic 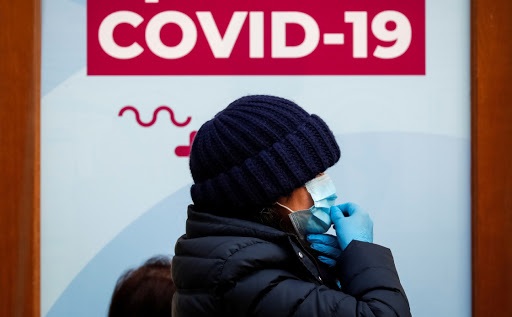 A woman walks past a sign outside a vaccination centre. File photo: REUTERS/SHAMIL ZHUMATOV

The paucity of diverse scientific views used in Covid-19 policymaking and the proliferation of undemocratic, quasi-scientific, untested, and coercive government decrees on the hoof, are deeply concerning and a raison d’être for popular resistance in various countries.

The predicament faced by policymakers and the victims of the pandemic was particularly highlighted by the Great Barrington Declaration, which set out an alternative solution to current approaches. It called for a smarter route to herd immunity by way of “focused protection” to avoid or minimise the economic and social harm of the Covid-19 pandemic lockdowns — sheltering vulnerable populations such as the elderly while letting everyone else go about their normal lives, maintaining that the lockdown harm is mentally and physically worse than the pandemic.

The declaration was authored by globally respected scientists Dr Sunetra Gupta, Dr Martin Kulldorff and Dr Jay Bhattacharya, from Harvard, Oxford and Stanford universities, respectively. Renowned SA scientist and Nobel prize winner Michael Levitt from Stanford University is also a vehement critic of the current hysterical and absolutist approaches and advocates a similar approach to that of the Barrington Declaration.

The vehemence of the reaction attested to a syndrome of uncertainly, feeling of guilt, and fear of failure, on the part of defenders of the status quo and standpatters. Certainly a case of “the lady doth protest too much”.

Of course, in uncharted terrain, neither side is necessarily absolutely right or absolutely wrong. This is clearly not the zero-sum situation critics make it out to be, implying that only the regime and its hangers-on could be right. There still remain many unanswered questions as the pandemic rages on. Following on from this, it is particularly revealing how policymakers and politicians, despite the abundance of heterogeneous scientific views, still justify their actions by habitually saying “we are guided by the science”, as if there were a single scientific view — some kind of absolute or holy truth.

Besides, most of the policymaking is based on statistics and not science per se and, as we all know, statistical modelling is subject to sets of important assumptions and can easily be manipulated. Perhaps one of the reasons we are not seeing a greater level of popular support for alternative approaches such as the Barrington Declaration is that policymakers and many scientists brand the current lockdown strategy as the one that saves lives, and any suggestion of an alternative policy would come at the expense of many lives.

In the UK, we have heard the “Save the NHS. Save Lives” slogan ad nauseam. The media there also perpetuates this by publishing daily updates of frighteningly large numbers of infections and deaths. This approach is quite misleading as it creates a picture of some kind of race to save lives until all this is over. But the virus is not like a hurricane where everyone should hide in their bunkers until the storm has passed.

The difference here is that, when people come out of the proverbial bunker, infections will start rising again — the virus is endemic. All the lockdown does is change the distribution of infections over time, changing the shape of the curve, as it were. It does not change the area under the curve.

While it may be true that delaying infections prevents hospitals from being overrun and prevents other capacity constraints, and that this would, in that sense, save lives, this argument is now redundant. It was a reasonable argument to justify the initial lockdown last year, when the world was caught by surprise by a novel coronavirus. At that time the lockdown allowed governments and companies to catch up to build capacity. However, well over a year has passed and governments have had plenty time to deal with these crucial capacity constraints.

Totalitarian, undemocratic, unconstitutional, untested methods using governmental fiat to impose draconian restrictions on the hoof by decree cause untold hardship, a great deal of suffering, pain and anger, by many across the world

There have also since been significant advances in Covid-19 medical treatments and the production of vaccines. In parts of the world where we saw hospitalisation cases and infection levels plummeting there has been no relaxation to the lockdown approach. However, governments continue to encourage collective hysteria to promote the current lockdowns and justify their use as it is to get us to the finish line when all people will finally be vaccinated.

Even if you were to play the “save lives argument” card, then at least be consistent. For instance, we have extremely dangerous roads in SA, but we don’t see a government ban on driving or cycling even though this poses a level of risk to all those driving, and other users on the road. Furthermore, surely one should not discount the direct relationship between poverty and negative health outcomes, including death. Yes, it might not be as visible and immediate as Covid-19 deaths, but it will without doubt occur.

This is precisely the point — politicians don’t want to be blamed for immediate pandemic-induced deaths, but don’t mind brushing the more pernicious outcomes under the carpet. The totalitarian, undemocratic, unconstitutional, untested methods using governmental fiat to impose draconian restrictions on the hoof by decree cause untold hardship, a great deal of suffering, pain and anger, by many across the world.

As prominent British constitutional lawyer Lord Jonathan Sumption, remarked: “Coercive powers are exercised over citizens on a scale never previously attempted ... In the face of public resistance against lockdowns fear is deliberately stoked up using the language of impending doom”. There are uncomfortable reminders of the 1940s Nazi police state and the dictatorship in the Bolshevist Soviet Union. But it is particularly worrying that it is all happening in ostensibly democratic societies, now being reduced to “nations of sheep”.

Most totalitarian states are built on, and sustained by, ordinary people’s fears by way of the promotion of collective hysteria and resorting to nanny-state-ism and political demagoguery. In many cases dealing with the pandemic seems to have opened the way for mostly unqualified control freaks with individual agendas using government fiat to ignore the dictates of constitutionalism and democracy, while dire socio-economic consequences are not properly weighed up against the high price of a harsh and skewed lockdown regime.

It is a pity the rule-makers do not accept the fact that they mostly pursue imperfect, unverified policies and strategies and that the legitimacy of their actions are suspect. I am not implying that the aforementioned dissenting experts should be used instead of the others, but that they should be used in concert, collectively, instead of willy-nilly groping in the dark.

We need to have a balanced, well-considered set of views advising on “the science”. No doubt, decrees or policies are absolutely necessary to fight the pandemic, but the constitution and its limits on power should abuse still hold during this time of crisis and wisdom, should prevail over simply muddling through.

• Olivier, a former SA ambassador, is an emeritus professor at the University of Pretoria.

EDITORIAL: Localised lockdowns have to be proportionate

Government must stub out its fake news on smoking

Iata is trying to establish a so-called ‘travel pass’ that will act as a vaccine passport as well as a first reference point for information for ...
Opinion
4 months ago

PETER BRUCE: Hello, useless ANC. I phoned Moderna and they have vaccines for us

JONNY STEINBERG: The healthy rich and diseased poor in a 21st century dystopia

JONNY STEINBERG: The healthy rich and diseased poor in a 21st century dystopia