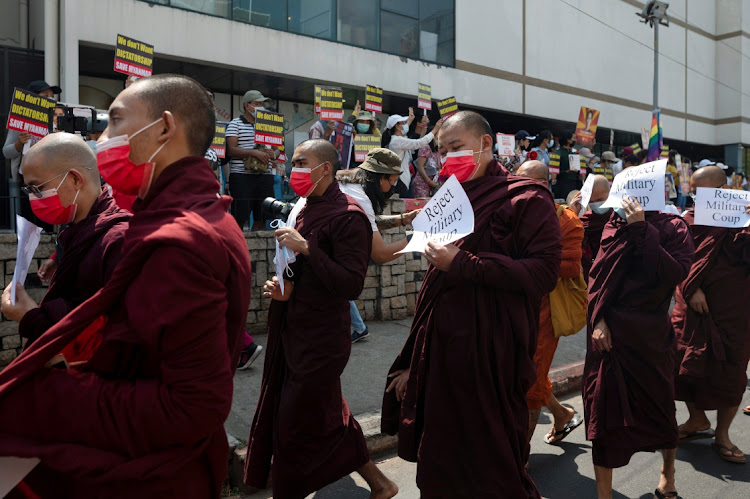 Saffron monks take part in a protest against the military coup in Yangon, Myanmar, February 16, 2021. REUTERS/STRINGER

There is something uncannily familiar about the courageous protests against the military coup in Myanmar. They echo the country’s previous expressions of antimilitary defiance, but also evoke other scenes that played out more than 1,000km away. The helmets worn by those on the front line, the walls bedecked with scrawled slogans on colourful sticky notes, and the flashmob-style demonstrations, are all straight from the playbook of activists in Hong Kong in 2019. Literally, a manual of tactics, translated into Burmese, was shared thousands of times on social media.

The same trend was evident in Thailand, where prodemocracy protesters have demanded reforms to the monarchy and the removal of the prime minister, and it is not just an Asian phenomenon. Demonstrators in Belarus also held up umbrellas as security forces fired teargas. In Lebanon, they too used tennis rackets to hit back teargas canisters. Activists worldwide have drawn not only upon specific tactics used in Hong Kong, but above all upon its “be water” ethos of fluid, fast-shifting methods of protest and informal organisation.

The Hong Kong protesters themselves looked closely at Taiwan’s youthful “sunflower movement” of 2014 and Ukraine’s Maidan protests, illustrating that there is nothing remotely new about uprisings drawing inspiration from each other, even across vast distances — as when the American Revolution fuelled France’s. The difference is the sheer speed with which ideas can now spread. Long boat or train journeys to meet the like-minded have been replaced by exchange online.

Yet while protesters have secure messaging apps such as Telegram, the authorities they confront have well-developed surveillance networks as well as large security forces, and vast coffers to fund the purchase of tools and technologies. What they lack in agility, they more than make up for in the sheer amount of power and resources on their side. And they too learn from and support each other, studying what tactics have worked against uprisings elsewhere, offering diplomatic cover at the UN and trading coercive software and weapons. /London, February 14

Organisers say more than 4,000 participated in the silent demonstration
World
4 months ago

Ousted leader was expected in court on Monday, but will be detained until Wednesday, judge said
World
4 months ago

Army chief Min Aung Hlaing is reported to have approved changes to the telecoms law, cracking down on illegal activity online
World
4 months ago
Next Article