DAVID MASONDO: Operation Vulindlela has what it takes to get reforms off the ground 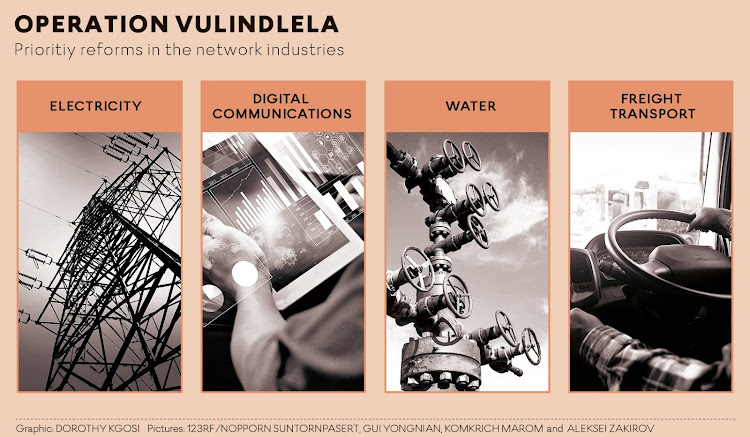 Poor aggregate demand is not the only reason for SA’s poor economic growth performance. The supply of electricity, telecommunications, water, skills and transport of goods and people have been key strategic constraints on economic growth.

Addressing these requires structural reforms of network industries to unleash the growth potential, thus setting the material basis for employment and tax revenue. These reforms are meant to reduce the cost of doing business and living, which will make SA globally competitive and increase the rate of investment.

A set of structural reforms has been identified in the Economic Reconstruction and Recovery Plan (ERRP) adopted by labour, business, the government and community in the National Economic Development and Labour Council (Nedlac). Treasury modelling indicates that successful implementation of the 2020 ERRP can raise growth to beyond 3% by 2030, with structural reforms contributing the most to this growth. If not, the baseline growth is projected to be 1.7%, and with population growth at near 2% South Africans will grow poorer over time.

Through Operation Vulindlela, a joint operation between the presidency and Treasury, we have been facilitating the implementation of structural reforms, which are also at the core of the ERRP.

Operation Vulindlela prioritises reforms in the network industries of electricity, digital communications, water and freight transport, because of their potential high impact on economic growth. The operation supports the economic cluster — the cabinet, the National Economic Recovery Council and the president — to ensure approved priority structural reforms are implemented efficiently, effectively and expeditiously.

It is a government-wide project, where ministers, departments and entities implement structural reforms, and a dedicated Operation Vulindlela unit monitors progress, engages with reform implementers, escalates challenges, provides support to fast-track implementation and provides progress reports that are independent of the reform implementers.

In the electricity sector, the desired outcome of the reforms is to stabilise electricity supply. The key structural reforms include increasing the role of independent power producers (IPPs), restructuring Eskom, improving the energy availability factor on Eskom’s existing generating fleet and addressing institutional inefficiencies in municipal electricity distribution.

The problems that these reforms are aimed at addressing include the shortage of electricity, the lack of competition in electricity generation, inability of the government to fund investment in additional generation capacity and the deteriorating quality of municipal electricity distribution services assets.

Key reform actions include implementing the emergency procurement of 2,000MW of power, implementing IPP  procurements in terms of the Integrated Resources Plan (IRP) 2019, creating an enabling environment for increased investment in embedded or distributed generation and enabling municipalities to procure power from IPPs.

The problems these reforms are aimed at addressing include insufficient spectrum being available for network operators to provide high-quality and competitive services and difficulties experienced by network providers in rolling out infrastructure such as fibre networks.

In the water sector, the desired outcome of the reforms is a sustainable supply of water to meet demand. The key structural reforms include improving water-use licensing processes, establishing an independent economic regulator for water, finalising and implementing the revised raw water pricing strategy, establishing a national water resources infrastructure agency and addressing institutional inefficiencies in municipal water and sanitation services.

In the freight transport sector, the desired outcome of the reforms is competitive and efficient freight transport. The key structural reforms include improving the efficiency and competitiveness of the ports, establishing a transport economic regulator, implementing a third-party access policy on freight rail lines and concessioning rail branch lines where feasible.

The problems these reforms aim to address include that our ports are falling behind in terms of international competitiveness, the underperformance of rail compared with road freight transport, a lack of competition in freight transport services and inadequate regulation of pricing and service standards in freight and commuter transport.

We have also prioritised a few other reforms outside the network industries, including improving the regulatory frameworks and processes for issuing work permits for scarce skills and for skilled immigration so they are more effective and efficient; the implementation of the e-visa system and the expansion of visa waivers to more countries to enable growth in tourism; and the finalisation of the white paper on national rail policy to address the underperformance of freight and passenger rail in terms of market share and service standards.

The role of Operation Vulindlela is to identify and resolve the various causes of delays in the implementation of all these reforms. Where a lack of co-ordination is the cause, the presidency is assisting in this regard. For example, the presidency will be co-ordinating a review of the roles, responsibilities and processes of all the departments and entities involved in the issuing of work permits. Where a lack of capacity is the cause, Operation Vulindlela is facilitating technical support in the short term, while the longer-term capacity issues are being tackled.

For example, the Treasury has facilitated donor-funded technical support to the department of water & sanitation to re-engineer its business processes for issuing water-use licences. Where policy contention is the cause this is done through sectoral analysis, engagement with the relevant departments and entities as well as stakeholders and sector experts and, where necessary, escalation of the contentious issues to the economic cluster, cabinet and president for resolution. The first objective is to find a resolution at management level, but in some instances decisive political decisions need to be made to unlock implementation.

Ramaphosa promises faster reform and more support for the poor