Sona and budget have limited options for recovery from Covid devastation 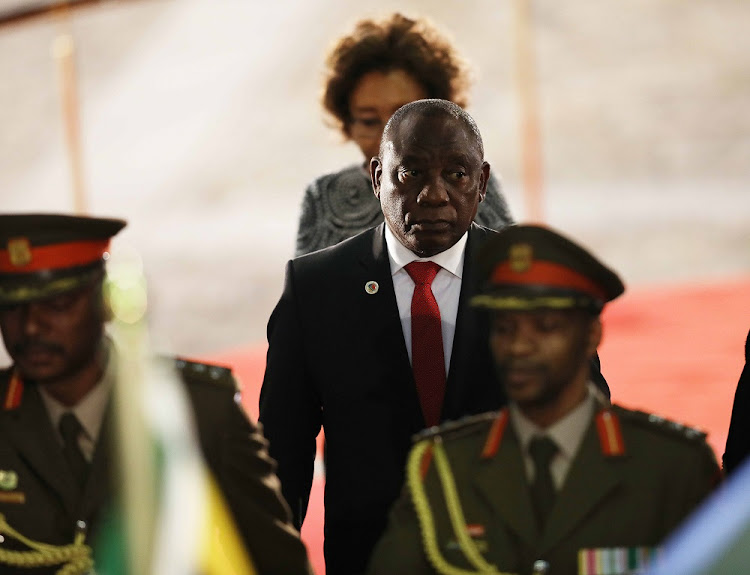 President Cyril Ramaphosa arrives to deliver his state of the nation address at parliament in Cape Town in 2019. Picture: REUTERS/SUMAYA HISHAM

February is traditionally the month the president delivers the annual state of the nation address (Sona) when he outlines the government’s plans for the year ahead. This is followed shortly afterwards by the finance minister’s budget speech, which outlines how the government’s budget will be allocated.

In 2021, both the Sona and the budget must address plans for the country’s recovery from the Covid-19 pandemic and  prolonged lockdowns that decimated an already struggling economy.

The  priority for the government is to acquire sufficient Covid-19 vaccine doses and then distribute them as quickly as possible. President Cyril Ramaphosa is expected to reveal the specifics regarding SA’s Covid-19 vaccine acquisition and distribution strategy in his Sona on February 11. Much of the government’s overall response to the pandemic has been subject to debate on bizarre bans, squandered opportunities and allegations of corruption. What is clear though is that the government has repeatedly bungled its response to the pandemic.

In a recent open forum, Ramaphosa accused developed nations of stockpiling vaccines, adding that these countries will ultimately be gaining an economic advantage over nations that have not secured sufficient doses. While the comment may be true, it was not particularly helpful and, ultimately, it reflected more on SA’s inability to act proactively than anything else. The president is also likely to discuss SA’s macro-political role in the African vaccine supply context. This aspect is, unfortunately, a distraction. Rather than focusing on this issue, the president needs to outline actionable specifics in the local context, including a strategy for how the vaccines will be distributed.

Finance minister Tito Mboweni will address the cost of vaccine acquisition in his budget speech later in February. He is unlikely to mention that the revenue in lost “sin taxes” as a result of the five-month ban on the sale of tobacco products and successive bans on the sale of alcohol would have been more than sufficient to pay for the vaccines. It’s important to remember that in addition to acquisition costs the government must factor in the cost of distribution, including the cost of nurses, personal protective equipment and needles to administer the more than 40-million vaccines.

Mboweni  is likely to explain how government will pay for the vaccine and whether there will be a one-off “vaccine tax”  — not something we believe is likely to occur — whether spending will be reprioritized from elsewhere, or whether additional debt will need to be raised. If it’s the latter, where will this debt be raised and how much will it cost the country in the long term? Another International Monetary Fund (IMF) loan is a possibility.

Mboweni’s biggest challenge is a decline in tax revenue over the past 10 months. To address this the National Treasury will be forced to look at increasing taxes. There have been murmurings in recent weeks of a proposed wealth tax to address the shortfall in the fiscus. However, Laffer Curve dynamics (the ability of a higher tax rate to actually result in higher taxes) indicates that the wealthy are likely to have already structured their affairs so that any proposed new taxes won’t apply, or they will be doing so very soon. As a result, we don’t believe a wealth tax is likely to be implemented.

Though there may be discussion over prescribed assets, the government will need to carefully define the parameters given that assets that could be prescribed are already invested in things such as government bonds. To ensure a carefully considered definition and a sensible outcome will require industry consultation, which will take some time.

The National Development Plan mentioned at 2020’s Sona will probably die a quiet death, to be replaced by the Economic Recovery and Reconstruction Plan the government launched in response to the Covid-19 crisis. The former’s demise is unfortunate as some reconciliation between these two ambitious projects would have been preferable.

Ramaphosa’s direct foreign investment drive has been   negatively affected by the events of the past year and is most evident in the cancellation of a number of major investment projects, particularly in the alcohol production business. In his Sona the president is expected to address this decline through further investment programmes such as the recently launched R1.2bn Tourism Equity Fund initiative.

A lack of energy security is one of the biggest impediments to SA's economic recovery. In 2020, a significant emphasis was put on the restructuring of Eskom and the role of independent energy producers. However, ongoing load-shedding  indicates the lack of progress that has been made in this area. Expect more talk on energy security from the president, but unfortunately there are not likely to be any impactful or meaningful announcements made.

The National Treasury recently released guidance on the hurdles in place to secure guarantees from the government for state-owned enterprise (SOE) debt after it declined to guarantee new Land Bank debt. The finance minister is likely to discuss the National Treasury’s philosophical approach to injecting equity capital into SOEs vs providing guarantees. The former is riskier but is far less likely to be used. The question now is whether Treasury’s finances have actually improved on the back of this change in philosophical approach.

That the hurdle for government assistance to SOEs is now so much higher should be regarded positively. At the very least it ensures that these entities start to think along more commercial lines. The finance minister has no choice but to curb bailouts to inefficient SOEs. The IMF recently reiterated the need for SA to reduce its excessive public sector wage bill and said ill-targeted transfers to inefficient SOEs continue to be a cause for concern.

While education and unemployment are likely to be discussed at length once again in this year’s Sona, the emphasis now is likely to be on the cohort of disadvantaged learners and students who reside in remote areas and lack reasonable internet access. Estimations are that the pandemic is likely to cost these individuals two or even three years’ education. This signifies a desperate situation for an extremely vulnerable sector of our population. The government has a responsibility to ensure this group does not become a lost generation. However, with a constrained budget the solutions to this challenge are limited.

While hard economic facts are beyond dispute, assumptions, conspiracies and prejudices only make matters worse
Opinion
2 months ago

Imagine if your government obsessed over its citizens and their needs, before considering how best to serve itself
Opinion
2 months ago
Next Article