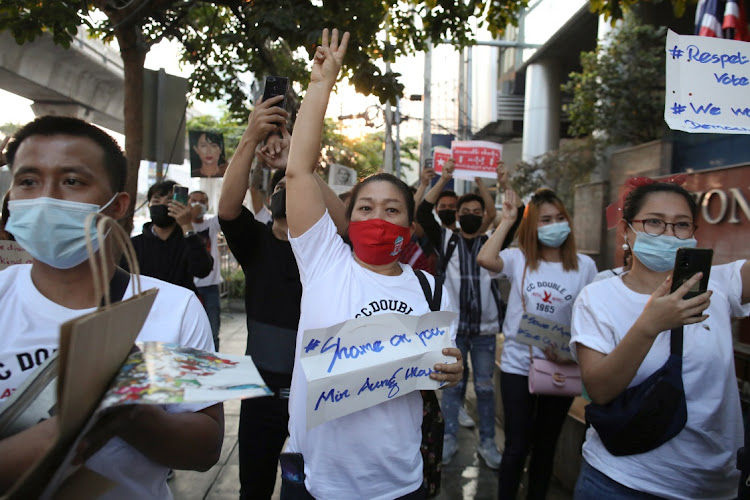 Myanmar citizens show the three-finger salute as they protest against the military coup in their country, outside Myanmar embassy in Bangkok, Thailand, February 8 2021. REUTERS/SOE ZEYA TUN

Worldwide, fewer than one in 10 people live in a full democracy. In fact, largely as a result of Covid-19 restrictions, 2020 saw the biggest rollback of individual freedoms undertaken by governments during peacetime, according to the Democracy Index.

A military coup against an elected government in Myanmar has worsened the trend. What can existing democracies do about it?

That is exactly what Indonesia and Malaysia, two of Myanmar’s neighbours, have asked. Their leaders requested an urgent meeting of the 10-member Association of Southeast Asian Nations (Asean) to address Myanmar’s “backward” step on democracy.

“We fear the political unrest in Myanmar could disturb the security and stability in this region,” said Malaysian prime minister Muhyiddin Yassin in a meeting with his Indonesian counterpart.

Indonesian president Joko Widodo said: “It is important for all of us to respect the Asean charter, particularly rule of law, good governance, democracy, human rights, and constitutional government.”

As a regional grouping Asean itself is unlikely to act against one of its members. Six of the 10 countries — Brunei, Cambodia, Laos, Myanmar, Thailand, and Vietnam — have authoritarian regimes. Yet in the past, its democratic members, especially Indonesia, have used Asian-style consensus-making — dubbed “enhanced interaction” — to bring democratic change in Myanmar. In 2012, its military rulers allowed Asean election observers to monitor parliamentary elections.

Other regional groupings, such as those in Latin America, Europe and Africa, have also found neighbourly nudging to be effective. Nations in proximity to one another and often with shared history may carry more moral weight in holding dictators accountable than global institutions. The AU, for example, helped mediate a democratic transition in Sudan in 2019.

Brunei, a small sultanate that is Asean’s current chair, has yet to call a meeting over the Myanmar crisis. Yet it did cite the Asean charter’s democratic principles in asking for dialogue in the country. Geographic neighbours need not watch each other but they can watch out for each other. /Boston, February 5

Myanmar’s military coup: the why and where to from here

The drinks giant said it has no option but to terminate the joint-venture, dating back to 2015, after Myanmar’s military coup
World
5 months ago

US President Joe Biden says the Myanmar military should step down, floating the idea of sanctions
World
5 months ago
Next Article