We cannot depend on the constitution to protect our freedoms 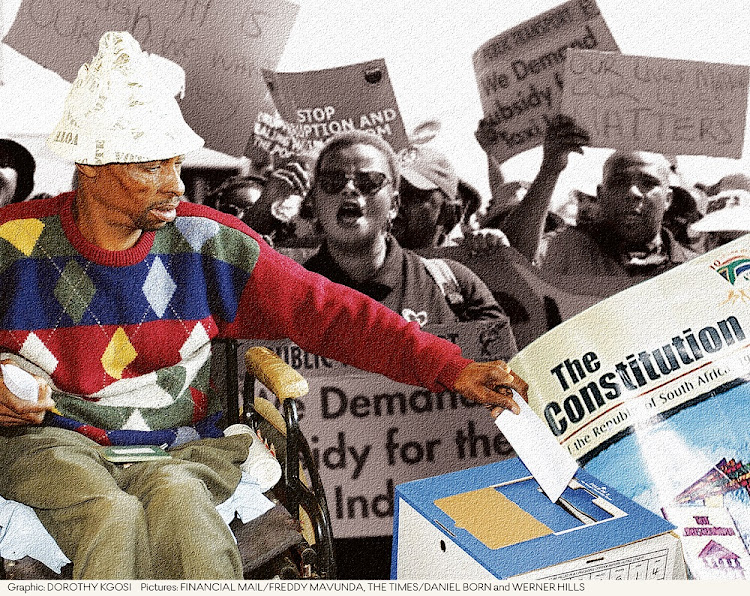 As part of its “myth-busting” initiative around the response to Covid-19 in SA, the government published an online graphic declaring that “our freedoms will never be at risk and are protected by the constitution”. It has inadvertently peddled its own myth in the process: that South Africans’ civil liberties are kept alive by nothing more than an inanimate legal text and the good intentions of politicians.

The “myth”  the graphic ostensibly counters is that “lockdown measures deprive people of their freedoms and are in keeping with an authoritarian regime”. This is far from mythical, though it may be a (slightly) overstated version of the truth. The government’s full answer to this myth is that “the current measures are temporary and have been enacted to protect our nation and her people”. It then continues to mention the aforementioned constitutional protection, but additionally says “our commitment to the rule of law and democracy and freedom” is a further reason for South Africans not to fear losing their freedom.

Yet there is much reason to doubt the present government’s commitment to the rule of law and freedom. After all, this is the same government that is in the process of amending the very constitution that will apparently always protect us, to remove an important right that safeguards our freedom: the right to compensation upon expropriation of our property. This is also the same government that cannot go a week without another corruption scandal being revealed in the media.

I have more faith in the constitution than the University of Pretoria’s Prof Koos Malan professes in his excellent book There is No Supreme Constitution, but the basic premise of his argument is entirely correct: the claimed supremacy of the constitution alone will not secure the blessings of freedom and limited government.

The constitution is not sentient; it is an inanimate legal text that provides a framework for governance. In the absence of a conscientious civil society and, particularly, legal profession (including an independent bar and courts), the constitution is nothing more than a toothless suggestion made 26 years ago.

A mere toothless suggestion made decades ago is precisely how this government has often treated the constitution — no less during the present lockdown. Recall that the lockdown was initially only supposed to last three weeks. It has now been about 300 days. One might argue that the extension of the lockdown was justified by the severity of the Covid-19 pandemic, but that is precisely the point: there will always be another “good reason” to curb people’s civil liberties — and the government will always get to define what a “good reason” is.

This experiment might just convince the government to, for instance, impose a permanent curfew, since the lockdown curfew seems to be at least partly responsible for the reduced pressure on hospital trauma units. This might seem far-fetched, and hopefully it is, but if I told you two years ago that the government would in effect ban shaking hands and going to church, you would have said the same thing.

Safety (including health) and liberty are always in tension with one another. It is our unfortunate lot to make the incredibly difficult decision to consciously and deliberately choose freedom over safety.

Many believed that entrenching the Cape franchise of coloured voters in the 1910 constitution would be sufficient for the protection of those political rights. But by the 1950s these protections were either ignored or explained away by the then whites-only government, which succeeded in disenfranchising coloureds entirely. This came several years after the government followed a constitutional process to remove blacks in the Cape from the voters roll as well.

That is to say that the constitution may even provide for its own undoing, which is what we are seeing with the process to weaken South Africans’ property rights by amending section 25 of the current constitution to allow for expropriation without compensation.

Whether they intend to, or admit it or not, politicians and bureaucrats in the civil service will always be looking to enlarge their domain at the expense of the domain of civil society and the public. With historic constitutional moments, such as the end of apartheid and transition to democracy the exception, reductions in the legislative and regulatory domain are vanishingly rare — there is only expansion. I invite anyone to show me one sector in SA that has been substantively deregulated since the deregulations of the 1990s. No example will be forthcoming.

Governments were originally instituted to protect freedom and individual rights, but since then have become uncontrolled forces that do whatever they want, under the guise of simply “enforcing the law” — the same legislation that the government itself makes and administers. The constitution, while not perfect, does entrench the freedom of civil society and the public, but it is only as strong as our willingness to insist, vociferously and without concession, on a government that adheres strictly to its prescripts.

This can and should be done in the courts, at the ballot box, in opinion columns and letters, and through other types of petitions and protests. Our constitutional freedoms are inherently and will inherently always be at risk. Ignore the soothsayers in the government who would have you believe otherwise.

The greatest protection for constitutionalism is a civil society and public that are distrustful of government — a civil society that does not feel sorry for the president when he cries while announcing further curbs on our hard-won individual rights. The government today is not our friend. It is at best an opponent in the never-ending tug of war over our civil liberties, and at worst an enemy.

• Van Staden is a member of the executive committee and rule of law board of advisers at the Free Market Foundation. He is author of ‘The Constitution and the Rule of Law: An Introduction’ and is reading for a doctorate in law at the University of Pretoria.

The ‘nil compensation’ clause does not replace just and equitable compensation but merely states that a court can determine that it is just and ...
Opinion
8 months ago

The ANC has made a choice and is sticking with it, and President Ramaphosa will now have to try  much harder to reassure investors
National
8 months ago
Next Article