After his arrest, the question for the West becomes ever more urgent: what to do now? 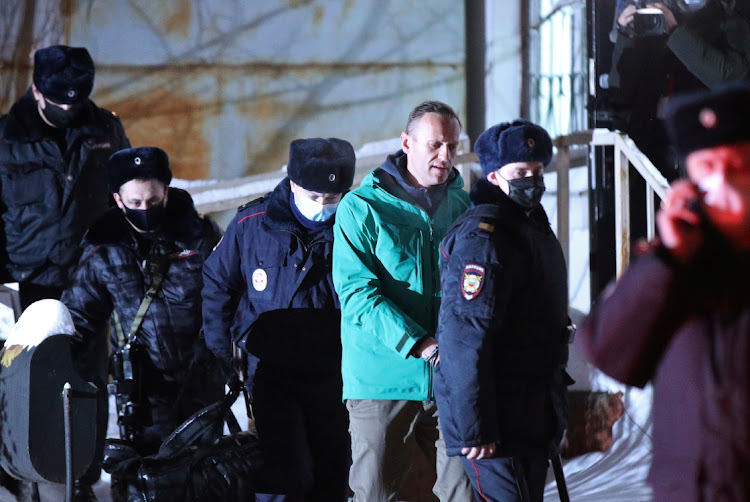 Russian opposition leader Alexei Navalny is escorted by police officers after a court hearing, in Khimki outside Moscow on January 18 2021. Picture: EVGENY FELDMAN/MEDUZA via REUTERS

Alexei Navalny’s decision to return to Russia from Berlin, having survived a suspected assassination attempt by state security agents, was an act of extraordinary bravery. The Russian opposition leader and anticorruption campaigner was arrested on arrival at Moscow’s Sheremetyevo airport on Sunday night.

In a hastily convened court hearing, held in a police station, a judge ruled on Monday that Navalny would be kept in custody for 30 days for allegedly breaching the terms of a 2014 suspended sentence following a fraud conviction. The European court of human rights ruled that conviction to be politically motivated. It seems likely that the three-and-a-half-year sentence handed down will now be carried out.

At various points over the last decade or so Navalny has been badly beaten up while campaigning, nearly blinded in one eye following a chemical attack and regularly imprisoned. Even so, rather than choose the safer option of exile in Germany, he elected to continue the fight for democratic reform on Russian soil.

Worldwide condemnation of the Kremlin has been predictably swift. The question is what comes next. Confronted yet again with Vladimir Putin’s brutal determination to silence legitimate opposition, the West faces another bout of soul-searching. The Kremlin takes no notice whatsoever of moral lectures from foreign capitals, while targeted sanctions such as those imposed in the wake of the Skripal poisoning affair have had limited effect.

The timing, two days before the US presidential inauguration in Washington, constitutes an early test for Joe Biden. In the northern hemisphere autumn, as Donald Trump resisted bipartisan calls to impose sanctions following Navalny’s poisoning, the president-elect pledged to work with allies to hold the Kremlin accountable for its actions. But those allies are themselves somewhat divided over how best to deal with Putin.

In the wake of Navalny’s suspected poisoning by the Russian Federal Security Service, which is denied by the Kremlin, EU sanctions were imposed on six senior Russian officials it believed to be associated with the plot. Despite calls for wider-ranging action, there was little appetite to go further. However, the impunity with which Putin continues to flout international norms makes this policy of constructive engagement an increasingly hard sell. /London, January 18

LUNCH WITH THE FT: Svetlana Tikhanovskaya: ‘They were sure I was a nobody’

For Russia, Kyrgyzstan — which borders China and is one of the stops on its One Belt, One Road trade corridor across Asia to Europe — is very ...
World
5 months ago

GIDEON RACHMAN: Three strongmen and their battle for the Middle East