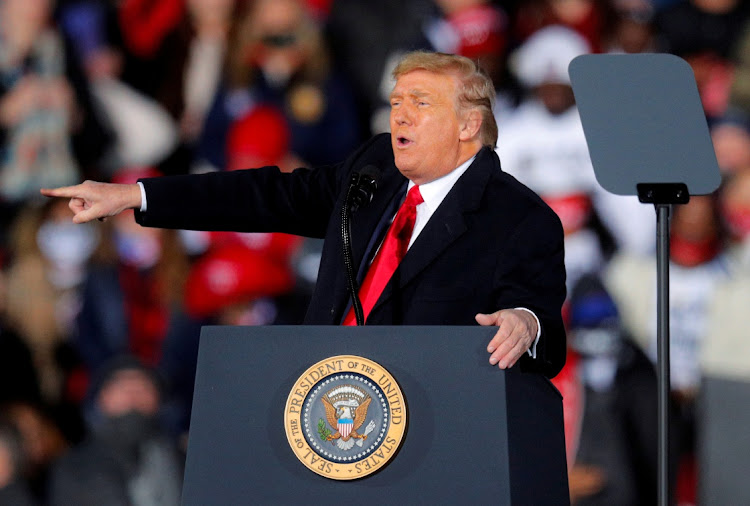 US President Donald Trump addresses a rally in Dalton, Georgia, the US, January 4 2021. Picture: REUTERS/BRIAN SNYDER

Twitter has done something that was once thought unimaginable. It shut down one of its biggest attractions — Donald Trump’s account — and in doing so also cancelled a sitting US president.

The ban and public-safety rationale behind it are part of a wave of crackdowns on the public digital spaces where the president’s most radicalised supporters congregate, and it comes in response to the violence and bloodshed of last week’s assault on the Capitol.

At the weekend, fledgling conservative social network Parler was effectively shut off by the technology giants it relied on to reach its user base — including its removal from Google’s and Apple’s app stores and the decision by Amazon.com’s Amazon Web Services to stop hosting Parler’s service.

While the logic behind the actions was legitimate, the latest developments illustrate the power these companies possess as gatekeepers of content and information; their willingness to exercise that power opens a new chapter in the story of Big Tech.

The actions were the right thing to do and inevitable at this point, as I argued last week, even if they do raise larger questions about technology companies as the arbiters of discourse and highlight the arbitrary nature of the standards and rules that govern content across the industry. The evidence is incontrovertible that the angry mob had used Facebook, Twitter and Parler to co-ordinate their January 6 attack.

It needs to attract more users through innovative features beyond its core service and find ways to monetise them. It has failed to do either over the last decade

Twitter said one of the main reasons for its suspension was a proliferation of posts planning future armed rallies after Trump’s most recent tweets. To allow the same extremists to again use public platforms to incite more violence would be irresponsible given the events of last week, so it’s good they’ve been shut down.

However justified the moves were, Twitter especially faces concrete business implications. For better or worse, banning Trump — whose constant controversial statements and posts stoked much of the fervent debate and discussion on the platform in recent years — will curb user growth and engagement. The numbers speak for themselves: The president’s account had about 90-million followers, compared with the 187-million monetisable average daily active users Twitter reported in its most recent quarter. Many of his supporters are already threatening to leave Twitter in protest. Good riddance? Perhaps. But investors have already grown skittish over the risks. The company’s stock price declined 4.5% since Wednesday’s riot, and fell an additional 3.8% on Friday after the Trump ban news.

Unlike the other technology giants that have taken a stand — all of which have strong balance sheets and generally thriving businesses — Twitter has been struggling to fix several core problems, from lack of innovation to inferior ad-platform technology and security lapses. CEO Jack Dorsey has moreover come under criticism from activist investor Elliott Management.

Despite a recent rebound in its stock price since last summer on rising optimism for an advertising recovery, Twitter now faces a bumpier future. And while the curbs on competitors such as Parler may on the margin keep some of Trump’s users from departing, it won’t be enough to overcome Twitter’s challenges.

What should Twitter do? It needs to attract more users through innovative features beyond its core service and find ways to monetise them. It has failed to do either over the last decade.

To be fair, the company has been trying in recent months. Last November, Twitter launched Fleets, a knock-off version of Instagram Stories and Snapchat Stories. So far, however, it doesn’t seem to be taking off. In my experience, a large portion of the stories on Fleets are just screenshots of individual tweets, defeating the purpose of the new feature. Twitter is also testing an audio-based chat room product called Spaces, again copying the competition — this time venture-backed start-up Clubhouse. But the success of these two offerings is not assured.

Perhaps most demoralising for Twitter’s investors is that the company’s user base is driving the surging growth behind two of the hottest start-ups out there — the aforementioned Clubhouse and paid e-mail newsletter service Substack. Anecdotally, Twitter may have already fallen too far behind both.

It’s not just word of mouth either: Substack’s e-mails and Clubhouse’s app offer single-click access to subscribe or follow these new accounts. The reality is they are riding on Twitter’s rails for free in expanding their memberships. In a year, Twitter shareholders may again lament how the company missed out on the next big thing in these two lucrative new growth areas Twitter should have dominated.

Twitter should be applauded in putting public interest over its profits. But its future, already cloudy, is now decidedly more complicated.

Johnson isn’t as close to Trump as his enemies suggest, but Johnson was thrilled about their joint mission of making leftish liberals miserable
Opinion
5 months ago

Nobody needs to take back the country. We need to commit to taking it forward
Opinion
5 months ago
Next Article