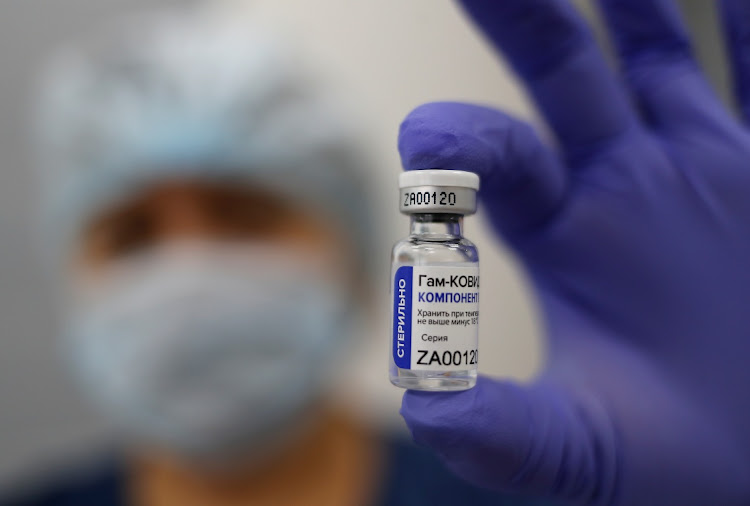 A vial of the Sputnik V vaccine in Domodedovo near Moscow, Russia. Picture: REUTERS/MAXIM SHEMETOV

When it comes to Covid-19 vaccines, a lot of attention seems to have centred on the ones being made in the West. So it may come as a surprise that Russia is fifth on the list of vaccine makers with the most doses under contract through pre-purchase agreements, according to Bloomberg’s Covid-19 vaccine tracker.

The shot — whimsically named Sputnik V and developed by the Gamaleya institute — is just behind GlaxoSmithKline and Sanofi’s candidate in the rankings and ahead of the shots developed by Moderna and Johnson & Johnson. This is notable for a vaccine that has yet to be featured in any peer-reviewed scientific journal.

How do we know we can trust it?

Russia hasn’t released late-stage phase 3 data on its vaccine; all we have to go on are press announcements, similar to the situation with the Chinese shot made by Sinovac Biotech. The assumption is that regional health authorities have approved the Russian vaccine based on good efficacy and safety data, but there is no way of independently verifying these things without actually seeing it ourselves.

That said, what we do know about Sputnik V and its design should give us some degree of confidence.

What’s known: the Sputnik V has been tested in a phase 3 trial involving 22,714 subjects, with three interim analyses when the number of confirmed cases reached 20, 39 and 78, respectively. While the final number of cases is lower than that in the Moderna and Pfizer-BioNTech vaccine trials, those were larger and conducted in the US, where the infection rates were rising rapidly.

The Sputnik V vaccine may well be as strong a candidate as the ones created in Western labs. The same can’t be said for Sinovac’s shot, CoronaVac

Efficacy at each interim analysis in the Sputnik V trial was consistently at 90% or above, based on comments in press releases. There were also no cases of severe Covid-19 in vaccinated individuals, though definitions of disease severity are not clear.

As for its design, Sputnik V was developed using the kind of advanced vaccine technology employed in shots made by the AstraZeneca-Oxford University partnership and J&J. These two-dose vaccines use adenoviral vectors — viruses based on the cause of the common cold that are engineered to deliver the genetic material coding for the Sars-CoV-2’s key “spike” protein, which prompts the immune system to mount a response to protect against further infections.

Sputnik V has one key, clever difference from the AstraZeneca and J&J vaccines: it uses the same adenovirus as J&J for the first dose (adenovirus-26) but a different adenovirus (adenovirus-5) for the second dose. In this way, it avoids the possibility of immunity to the first dose affecting the ability of the second dose to work efficiently. One issue is that a large percentage of people have pre-existing immunity to adenovirus-5, but that’s not a huge drawback if the efficacy is very high.

A potentially more promising alternative would be to try a combination of adenovirus-26 for the first shot and AstraZeneca’s adenoviral vector — made from a chimp adenovirus — for the second, which is exactly what the two groups have agreed to do in a collaboration announced on December 11.

Taken together, these details — even without the phase 3 results — give me reason to think the Sputnik V vaccine may well be as strong a candidate as the ones created in Western labs. The same can’t be said for Sinovac’s shot, CoronaVac, which is undergoing trials in Turkey, Brazil and Indonesia.

Phase 3 efficacy data for the CoronaVac shot has been all over the place — from 50% to more than 90% — with different numbers coming from different authorities in recent weeks. On Thursday, a Brazilian newspaper reported efficacy for the shot of 78%, adding to the confusion. This opacity does not help confidence in the vaccine. Then there is the question of the technology base. CoronaVac uses killed virus in its vaccine, mixed with a traditional adjuvant called alum.

It’s similar to the shot in development by French biotech firm Valneva, though the latter uses a potentially more powerful adjuvant from its partnership with California-based Dynavax Technologies. While both may have the theoretical advantage of inducing an immune response to other parts of the virus than just the spike protein, which is the target of most other vaccines, the choice of an old adjuvant for the Sinovac shot is not great.

At some point, I hope soon, the phase 3 data for the Sputnik V and CoronaVac vaccines will be published in a peer-reviewed journal so we can make up our own minds about the robustness of their efficacy and safety. As of now, though — and based on what I know so far — if I had to choose between the two, I would opt for a ride on Sputnik rather than a trip to CoronaVac’s golden stars.

Western vaccine developers are openly mocked on Russian state-controlled media, leading to claims that other vaccines will turn people into monkeys
World
7 months ago

CureVac, which had said it was looking for a larger partner, started a late-stage clinical trial of its Covid-19 vaccine candidate in December
World
6 months ago

The first results of tests on new UK and SA variants are encouraging, with more studies in the offing
World
6 months ago
Next Article