Iran has been vocal about wanting revenge for the death, but it’s unlikely it wants an all-out war 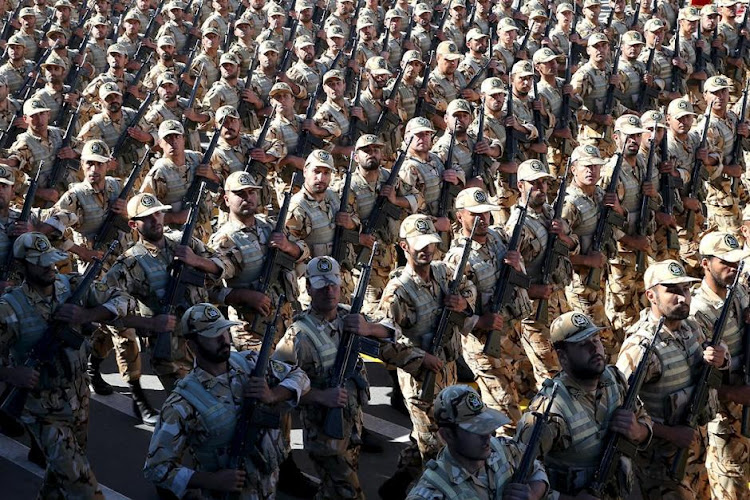 Iranian soldiers march during a military parade in Tehran, Iran before the pandemic. Picture: REUTERS

Ever since a US missile killed Iran’s most important general almost a year ago, the regime has been vowing revenge, with the latest threat coming just last week. Yet aside from a barrage of missile strikes on an Iraqi base last January, causing traumatic brain injuries (TBIs) for US soldiers stationed there, Iran’s response has been relatively muted.

That’s because, even as the US military prepares for anything Iran or its proxies might try, the regime is not looking for an open confrontation with the world’s most powerful military. So says Gen Frank McKenzie, the man in charge of the US central command.

“It’s a very complex issue,” McKenzie said in an interview on Sunday with a small group of reporters. “At one level, the Iranians are not looking for a major incident with the US, they are not looking for a war.” At the same time, he acknowledged that there is a real desire for the regime to avenge Gen Qasem Soleimani’s death.

That last part is understandable. Soleimani was a gifted military strategist, commanding a multi-front war and insurgency in the Middle East that, at its peak, included operations in Yemen, Iraq, Syria and Lebanon. Soleimani’s leadership abilities helped him co-ordinate this multi-front war and keep the disparate proxies and militias on the same page.

Since Soleimani’s demise, McKenzie said, the US has seen fissures within the Shiite militias Iran supported in Iraq, some of which are more open to taking orders from Iraq’s elected government instead of its more menacing neighbour. Soleimani’s death, McKenzie said, “unhinged Iran’s ability to direct these units forcefully”.

On one hand this makes it more likely that rogue units could launch unauthorised attacks. On the other, the frequency of attacks from Iranian-supported militias against the US and its allies has diminished. “In the past few months, they have been few and far between,” McKenzie said.

All of this raises a question for US president-elect Joe Biden. Most of his party denounced President Donald Trump’s decision to kill Soleimani in January as a reckless provocation. Biden himself wrote in Foreign Affairs magazine that Soleimani’s killing “removed a dangerous actor but also raised the prospect of an ever-escalating cycle of violence in the region”.

Will Biden attempt to de-escalate that cycle with Iran — and will that work?

McKenzie’s perspective is instructive. Iran’s leaders have never doubted America’s “capability to respond” to their attacks, he said. Instead, the regime has doubted “our will to respond”. The Soleimani attack demonstrated a willingness “[America] did not think we would be able to have”. he said.

The events leading to Soleimani’s demise demonstrate the point. Iran began to escalate its attacks on US allies in the region in the spring of 2019. Its Islamic Revolutionary Guard Corps attacked oil tankers. A fleet of drones attacked a Saudi refinery. In the weeks leading up to the strike against Soleimani, Iranian-backed militias overran the US embassy in Baghdad. All the while, Trump avoided striking Iranian targets inside Iran, fearing it would lead to a new war in the Middle East.

When Trump finally did escalate things in January, the result was not a new war. The regime did fire on an Iraqi base and mistakenly shoot down a Ukrainian passenger jet, but eventually the pace of its attacks on US forces and allies in the region diminished. Deterrence was re-established.

That’s a valuable lesson for Biden as he prepares to take office. Iran’s supreme leader is now threatening revenge during a chaotic presidential transition. Biden should make it clear that the US has both the capability and willingness to respond to anything the Iranians are planning.