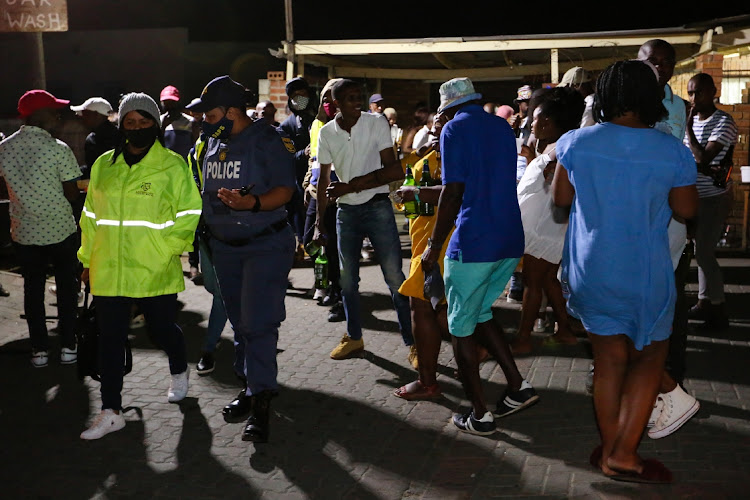 Several taverns were checked for Covid-19 compliance during a joint operation between the Metro Police, SAPS and the Eastern Cape Liquor Board on November 22 2020. Picture: WERNER HILLS

SA is experiencing a second wave of Covid-19 infections. The number of new cases being reported daily now is at the highest level since July (when the country experienced the first peak of the pandemic), and is rapidly increasing.

A further 19 districts have been identified as emerging hotspots within these provinces, and are expected to experience a similar surge in infections within the new few weeks. We also expect the imminent emergence of a second wave in KwaZulu-Natal.

With many South Africans expected to travel to these regions over the holiday period, we can expect larger crowds and greater levels of social interaction. These dynamics substantially heighten the risk of Covid-19 infection.

It’s important to note that hospital capacity in these hotspot regions is limited. We anticipate it will come under severe strain with the influx of travellers from other provinces, especially if there are expanded outbreaks. Strict collective adherence to preventive measures is therefore critical in mitigating the extent of the second wave and significant potential squeeze on hospital bed capacity — particularly in relation to ICU beds and ventilators.

Interestingly, SA’s experience mirrors the timing of Europe’s second wave, where cases peaked six to seven months after the initial outbreak. Now is the time for every person to act carefully and responsibly, to collectively limit the extent and impact of this second wave so we can avoid the devastating societal and economic effects seen in Europe in recent weeks.

The extent of the second wave of Covid-19 infection is dependent on the rate at which the virus spreads. How do we measure this rate of spread? How do we define it? In epidemic theory a rate of spread known as the “reproduction rate” — or “R” — measures the transmission of disease. In other words, R describes how many people in a population will be infected with a disease after coming into contact with a single infected person.

An R of 1 means every infected person (during the course of their infection) passes the virus on to only one other person. As a result, the number of people contracting the virus at any given time remains stable.

When R is higher than 1 every infected person passes the virus on to more than one person, so increasing the total number of infections in the population. Any R above 1, even if only slightly above 1, leads to exponential growth in the number of infected individuals.

Currently, SA’s R is 1.41, with KwaZulu-Natal at 1.9, Gauteng at 1.7 and the Western Cape at 1.4. This implies significant spread of infection within these provinces and fuels the potential spread of the second wave across the country.

Based on data emanating from reports by the SA Medical Research Council and Discovery Health’s extrapolations, it is estimated that about 30% of South Africans have already been infected with Covid-19.

With this in mind, Discovery Health’s outbreak modelling further suggests that maintaining an R of below 1.4 is critical to avoiding the further spread of the second wave of Covid-19 infection currently being experienced in the regions mentioned earlier. When infections in a particular area go beyond an R of 1.4 the virus starts spreading at uncontrollable rates, causing infections to reach high peaks shortly thereafter.

As a country, our target should ideally be to reduce R to below 1. We do this through our continued adherence to simple and routine preventative measures, including wearing a face mask in all public areas; continuing to practice good hygiene protocols including frequent hand washing with soap and water (or alcohol-based sanitiser) and ensuring adherence to cough and sneeze etiquette; maintaining physical distancing; avoiding large gatherings of people; and self-isolating when potentially exposed to the virus.

When it comes to face-mask wearing, research conducted at the University of Cambridge and the University of Greenwich demonstrates strong evidence that routine face-mask use by 50% or more of the population reduces the reproductive rate of Covid-19 to an R of less than 1. This results in flatter peaks and lower future disease waves, ultimately allowing for less-stringent lockdown measures to come into effect.

Establishing where people contract Covid-19, through contact tracing, is also fundamental. We strongly recommend that all South Africans download and use the Covid Alert SA app. This user-friendly app ensures absolute privacy while keeping every user notified (in as close to real time as possible) about their exposure to Covid-19. The app does not track location and app users remain 100% anonymous at all times.

Events where a single infected individual causes a disproportionately large number of secondary infections are called super-spreader events. As Covid-19 restrictions have eased in recent months, these sorts of events have become increasingly prevalent.

Breakdowns in adherence to physical distancing protocols, particularly at large gatherings such as the recent post-matric 2020 celebration events, have resulted in significant surges in Covid-19 infections over the past two months.

On December 6 the department of health classified year-end matric celebration events that took place on KwaZulu-Natal’s North Coast as super-spreader events. Young adults from across the country had, in the preceding days, travelled to Umhlanga and Ballito for these events. A range of preventive measures were put in place to prevent the spread of infection. However, the scale of the gatherings, close contact between participants and compliance with preventive measures, resulted in widespread Covid-19 infection among attendees.

Initial pathology reports indicate that over 80% of individuals who were tested following the post-matric events in Umhlanga and Ballito tested positive for Covid-19. Discovery Health’s data also shows that the proportion of positive tests in young adults increased by 3.6 times across the country in the first week of December, significantly more than the increases seen across other age categories.

Pathology data suggests many young adults attending these events returned home entirely asymptomatic, but infected and probably spreading the virus. Of importance, the majority of the positive tests in these young adults were received in their hometowns, demonstrating that the virus was transported across the country, with a high likelihood of many episodes of contact with others, and spread of infection.

In addition, initial data analysis shows that among Discovery Health Medical Scheme members, about 40% of immediate family members on the same policy also received positive Covid-19 diagnoses within a week to 10 days. This strongly suggests that infections were passed on from young adults returning from post-matric events, to their families.

In the first week of December, KwaZulu-Natal recorded an R values of 1.9, and that rate continues to increase. The local community hosting the post-matric events has also been significantly affected with a rapid rise in R on the KwaZulu-Natal North Coast, currently recorded at 1.514 in this area, and on the rise. These are the highest Rs recorded in the Dolphin Coast region since the first peaks of the pandemic earlier in 2020

While Discovery Health’s data shows that 94% of confirmed infections in young adults manifest in asymptomatic or mildly symptomatic infection, among older adults (people over the age of 60) and high-risk individuals, the effects have been more serious.

The proportion of infections within high risk groups has increased 1.6 times in the Eastern Cape’s second wave, with a 17% increase in hospitalisation within this group. Similarly, super-spreader events in the greater Garden Route region have caused the reproduction rate of the virus in this area to be as high as 1.8.

In the light of these elevated R rates in densely populated regions, Covid-19 infections are projected to surge and peak simultaneously, with a projected national peak in January 2021.

The effect of a large and sudden spread of new Covid-19 infections has potentially severe implications for hospital bed capacity — particularly in coastal regions that could experience temporary overcrowding due to an influx of festive season holidaymakers.

The Eastern Cape — particularly the Nelson Mandela Bay region — has already shown the first warning signs of this dynamic. Demand has come close to exceeding capacity in the private healthcare system, requiring medical reinforcements from nearby metros. The Garden Route — including Knysna, Plettenberg Bay and George — is also experiencing shortages of hospital beds, requiring patients to be moved by emergency services, where appropriate, to other parts of the country for treatment.

It is critical that we do all we can to prevent any further burden on hospitals in hotspot areas. Please, consider your travel plans very carefully to ensure you holiday safely. We urge holidaymakers, especially individuals aged over 60 years and those who have chronic conditions that place them at a higher risk for severe Covid-19 illness, to reconsider any travel plans to hotspot areas, currently including Nelson Mandela Bay, the Garden Route and Buffalo City.

We realise this has been a difficult and complicated year, and that this holiday season represents a welcome reprieve from the pressure of the past months. We are also aware of the difficulties a request to reconsider travel plans causes. Despite the welcome family time and relief that this holiday period promises, please do recognise the risks your travel to hotspot areas raises.

I have no doubt that by working together we can significantly limit the effects of a second wave of Covid-19 infection in our country and reduce R to less than 1. Although a potential vaccine should be available during 2021, the responsibility lies with every SA to help manage the second wave of Covid-19 as effectively as we did the first.

If you are 60 or older, do not go on holiday to Covid-19 hotspots, Discovery urges

Discovery Health says if there are further surges in the virus, hospital capacity in smaller towns will come under severe strain
National
10 months ago

The judge president argued that he has freedom of speech to say what he did. But he above all people knows this right doesn’t exist in a vacuum
Opinion
10 months ago