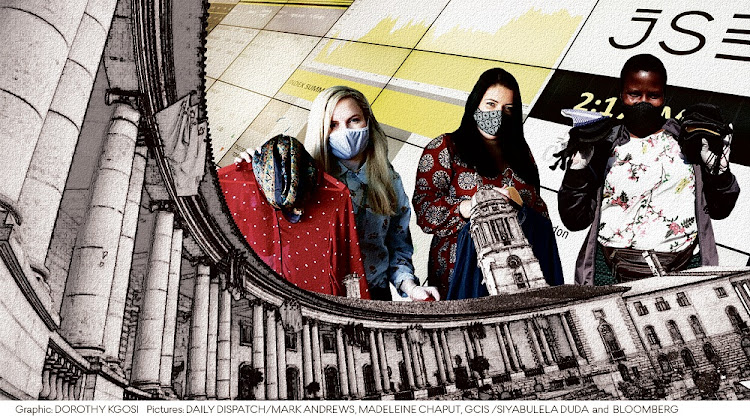 President Cyril Ramaphosa’s recovery plan had to respond to a very difficult situation. The country was in trouble before Covid-19 — an economy that has not grown for years, junk status, declining revenue, expanding debt, probably the world’s deepest unemployment crisis and a weak, corrupt almost broken state.

All this has been worsened by the pandemic and lockdown: an economy shrinking by about 8%, even higher unemployment, a revenue shortfall over R300bn, the country borrowing R2bn a day, and a growing social crisis.

Three years into the president’s term policy paralysis and implementation failures have resulted in no significant progress on a reform agenda and no real sense of urgency, all leading to a growing government credibility gap. A country adrift, desperate for bold leadership, direction and effective action. Is the plan good enough?  Is it going to get SA on a new path to much faster growth and job creation? Does it have the necessary first steps to build momentum to dig SA out of its terrible mess?

The state is at the heart of government’s plan. It acknowledges the need to strengthen the state but then immediately assumes that the current failing state can manage a large and complicated recovery. SA needs a capable state but this will take years to develop. It’s way past time that the president indicated the principles underpinning this reconstruction: merit, professionalism, service in the national interest, an appreciation of how to regulate competitive markets.

In the meantime, to assume that this almost broken state will be able to design, select and implement large, state-driven infrastructure projects involving complicated arrangements with the private sector is not credible. Nor is the idea that the current state can orchestrate yet another “buy local” campaign with localisation targets for every industry, coupled with additional empowerment requirements now including women, young people and military veterans. At the same time the state needs to finally implement a long list of structural reforms essential for growth as well as a new state-created and funded employment programme.

The plan fails to appreciate that the only real capacity in SA today lies overwhelmingly in the private sector, in entrepreneurs, firms, large corporates and markets. In the inventive, determined people who in the midst of uncertainty and adversity can see opportunity and build new firms. The government has failed to appreciate the essential message from business: SA has to free up the private sector from an inefficient, expensive and overregulating state if we are to grow.

Presidential rhetoric about “removing regulatory barriers that increase costs” notwithstanding, this plan will increase the costs of doing business in SA through new rules about “aggressive” localisation of every industry and expanded requirements for empowering additional groups. A global discussion on how countries might need to shorten supply chains for medical equipment to deal with future pandemics has mutated in the plan to a focus on forced localisation throughout the economy, including infrastructure.

Instead of fixing underlying causes of local manufacturing decline, the plan gives most attention to local content requirements which, says Business Leadership SA, “will certainly not increase the sector’s competitiveness”. Growth and jobs require a laser-like focus on creating export orientated industries that can supply global markets. The Minerals Council CEO’s response calls for “frank conversation on structural and institutional issues impeding competitiveness and growth” and “urgent development of detailed plans on how to unlock these constraints”.

Too much hope is put in infrastructure as a growth strategy. This is not a silver bullet and it is not clear how much progress has been made on creating the right conditions for large-scale private sector investment. After all, these infrastructure projects have been talked about for years. Everything will depend on building the right infrastructure that supports growth and pays for itself; managing the risk/return relationship with private partners — tricky at the best of times, harder with a weak state — making sure user charges are affordable and actually paid; and then maintaining infrastructure over the long term. The government’s track record on these issues is not encouraging.

The plan includes a long list of structural reforms, many of which have been on the president’s agenda for years. In 2018 the president committed to sorting out spectrum, now promised for March 2021. In February 2019 the president said his “highest priority” that year was to establish a “world-class” e-visa regime, in October 2020 the plan says “efforts are now focused on implementing an efficient e-visa programme”. There are some new items on the list. These include promises to improve the government’s procurement framework, a 50% reduction in mining licence times and private sector “access to the core rail network” and participation in ports.

What’s missing? Depressingly, the vital matter of sorting out large state-owned entities — all of which will need post-Covid bailouts — gets little attention. Labour market reforms were originally on the 2019 Treasury reform list and now appear on the third last page of the plan, in a list of “additional enablers” for recovery. It’s encouraging, of course, that this appears four bullet points above another enabler: “increasing the level of investment by the private sector”!

Four vital issues are not resolved in this plan. For SA to move forward we must recognise what has got the country into this mess. It’s not just the Covid lockdown but 12 years and more of misrule by the government. It’s not just Gupta state capture but bad policy decisions on almost every front. It’s an approach to markets, business and investors that has been so disastrous that before Covid-19 we were already in economic decline, with every ratings agency and international organisation warning that without fundamental reforms SA was heading for trouble.

An approach to empowerment that has fostered corruption and undermined ethics. An approach to education, skills and employment that has led to a country divided more and more deeply between insiders and outsiders. And a state that is now all but crippled, riddled with patronage and corruption but expensive. Honesty is required on what has gone wrong and why. This is the essential foundation to change course and build a bridge away from disaster.

Why is there never any explanation as to why reforms are not implemented? If something was promised in 2018 and still not delivered without any explanation for the delay, how can one believe that this time is different? Where is the notion of accountability here? An attempt to write down how the plan is to be implemented leads to a labyrinthine maze of committees, structures, processes, teams and working groups. In this haze who takes accountability for what? Will anyone ever be fired for lack of delivery?

My last, perhaps most important question concerns politics. For nearly three years the president has been locked in a tussle over reform within his party. This plan gives no answers as to how this policy paralysis will be resolved. Has the battle been joined, never mind won, on any fundamental issues at all? What SA needed was a bold change of direction. What this plan promises is an acceleration of more of the same.

• Bernstein is head of the Centre for Development and Enterprise.

Millions of people, particularly on the continent, still operate outside the formal economy
Opinion
8 months ago

Manufacturing production contracted 2.6% year on year in September, but beat forecasts for a steeper decline
Economy
8 months ago