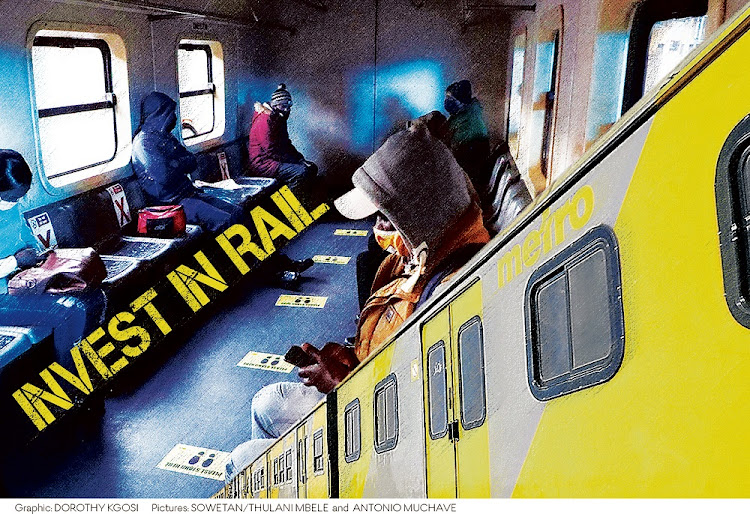 If SA is going to be a prosperous country in which people have work and we contribute to a better global future, we cannot afford not to invest in rail.

The promise we made to ourselves in the National Development Plan (NDP) — to eliminate poverty and reduce inequality by 2030 — is not achievable without more and better use of passenger and cargo rail. Without such use of rail, we will not be able to cope with the speed at which our population is growing, or the rate at which our society is urbanising.

Without rail as an integral part of our public transport and cargo logistics mix, we will not be able to meet the promises we made to the international community through global agreements such as the UN Framework Convention on Climate Change (UNFCCC) and the UN’s 2030 Agenda for Sustainable Development, and continental and regional agreements such as the AU’s Agenda 2063.

SA has a fast-growing population and is urbanising rapidly. We need to provide our citizens with access to affordable, efficient and safe transport modes, while changing our status as one of the 20 largest greenhouse gas emitters in the world.

The Council for Scientific and Industrial Research projects that by 2050 SA will have between 75-million and 80-million citizens. Of these, 77.5% (58-million to 62-million) will live in urban areas. If you live in a city or large town and drive a private vehicle, those figures probably make your heart sink — congestion is already a huge problem. Even with more of us working from home because of Covid-19, millions of people need to travel to work every day. And they cannot all drive themselves.

There is also the imperative to protect our children’s futures. Climate change is a huge challenge; it is not ours alone, but we are one of the larger contributors. Even without SA’s promise, through the UNFCCC, to restrict the peak of greenhouse gas emissions between 2020 and 2025 and then allow them to plateau for roughly a decade before decreasing them, we have a moral obligation to curb our contribution to global greenhouse gas emissions.

Climate change can seem an insurmountable challenge, but Gibela Rail Transport Consortium has a role to play in reducing  SA’s greenhouse gas emissions. In fact, we’re already doing this: our trains are energy efficient; we recycle almost everything that comes into our factory at Dunnottar on the East Rand; and our engines are able to feed a train’s braking energy back into the power system. This means we can add train-produced energy to the power grid, helping the move towards renewable energy so we stop contributing to climate change through our reliance on coal-based power.

If Gibela is to help SA on this score and in catering to the transport needs of its growing population, the Passenger Rail Agency of SA (Prasa) must be stabilised. Before Covid-19 temporarily shut down public transport across the world, Prasa’s Metrorail division conveyed up to 2-million commuters every weekday. In 2008/2009, this figure was 2.2-million or more. This drop-off in passenger numbers is sad. Metrorail’s passengers are SA’s working-class commuters, people who often cannot afford private vehicles. They should be able to use a fully integrated public transport system that includes passenger rail.

We have the network, and as cities and towns grow we will need to augment it, but too often we do not have working passenger trains. And it is the working class that loses out — inefficiency, late trains, vandalism and violence have seen them switch to other forms of public transport, often to their detriment due to higher trip prices. Metrorail passenger numbers have decreased even as the government spent R150bn on rail infrastructure, including our R53bn contract to provide 600 trains over a decade.

Gibela’s Dunnottar plant was finished in 2018. In the 2019/2020 financial year, we delivered 13 locally manufactured train sets, and have delivered a total of 33 train sets to Prasa, including 20 trains manufactured in Brazil. Each year of operation at Dunnottar we have more than trebled our output, though this year that trajectory stalled due to the pandemic. We aim to manufacture 50 trains for Prasa in 2022.

Since we started producing trains and carriages at Dunnottar in 2014, we have created 2,544 direct jobs, our first social impact report shows. We have also spent more than R23m on employee training, through which more than 1,454 staff members have benefited.

The majority of the trainees (90%) were black employees, and 50% were women, and our contribution to skills development does not stop there. The company put R81.4m into supplier and enterprise development across 42 entities, providing qualifying suppliers with access to funding, favourable credit terms and the free issuing of material, and giving them other business support, including access to technical expertise.

In short, we contributed 1.25% to Gauteng’s economy over the reporting period (January 2014 to March 2020). As Stats SA calculates that Gauteng generally contributes about a third of SA’s GDP in a financial year, this is no small feat for one new company.

While we can’t retain the 19,000 people who have benefited from our broader education and skills training programmes, we know their skills will benefit the economy in the long run. Any investment you make in improving the industrialisation of a developing country such as SA is bound to take pressure off the system. We have put thousands of newly skilled workers into the economy. Their skills will benefit them, and the economy, whether or not they remain in the rail industry.

We all know that, for more than a decade, SA has battled one of the highest unemployment rates in the world. The Covid-19 pandemic has worsened this. To put a figure on it, the official unemployment rate has hovered at about 30% for many years and Stats SA reported at the end of September that 2.2-million people lost their jobs in the second quarter of 2020. Worse, the unofficial unemployment rate, which includes people who have stopped looking for jobs, is about 40% of the working-age population. It doesn’t take an economist to know this is unsustainable.

Investing in SA’s passenger (and cargo) rail industry has another benefit — providing employment. We have a 19-year contract with Prasa to provide maintenance support in five depots across SA. That will translate into many jobs, and huge skills transfer. Even employees who leave us will do so carrying new, technical skills. This can only be a win for our country.

Investment in SA’s commuter rail network as part of a well-integrated network of transport modes has the back of the finance ministry and the Treasury. What’s needed is implementation of these transport plans so South Africans can enjoy the safe, affordable and effective transport we were promised in the NDP — and so we can do our part to ensure a better, greener world for our children. I call that a moral imperative.

Private trains ready to steam ahead

The rail agency, which has had five turnaround strategies implemented since its creation in 2009, registered irregular expenditure of R27.2bn in ...
National
1 year ago
Next Article

Transnet seeks growth through expanding into rest of Africa

Transnet seeks growth through expanding into rest of Africa