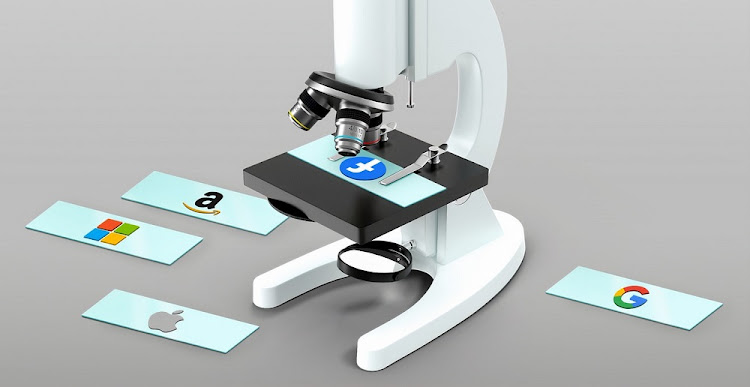 A century after Henry Ford and his Model T heralded the modern car industry, the stratospheric rise of electric car pioneer Elon Musk’s Tesla is signalling a significant turning point for that industry.

One hundred years ago the car industry was enabled by the emergence of a number of key supporting industries, such as oil, steel, aluminium, rubber and leather. It is therefore ironic that the rise of the electric car has become one of the existential threats to oil companies and that century-old car manufacturers have been left in the dust by failing to shed the combustion engines fast enough.

With the help of our own deep history database, we engaged in a study of global leaders over a century, to map the rise and fall of these giants. In 1896, Charles Dow, then editor of The Wall Street Journal, created the original Dow index with 12 constituents. The only one that is recognisable nowadays is General Electric.

The rising demand for steel to build skyscrapers and cars motivated John Pierpont Morgan to acquire Carnegie Steel, eventually creating  US Steel in 1901, the world’s first billion-dollar company. Due to mass production of cars, American households went from almost no car ownership in 1900 to close to a car per household in the 1930s. This spurred the entrance in the Dow index of General Motors and Chrysler in 1930. 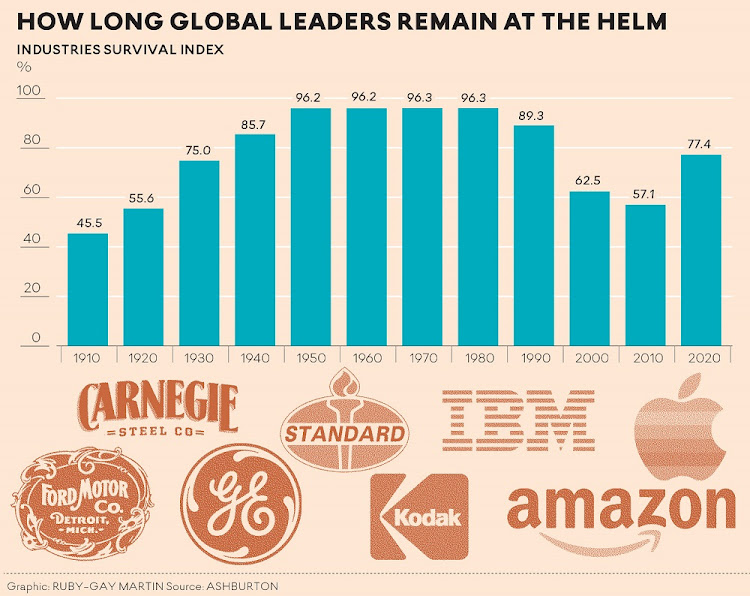 The increased mobility of households also changed the face of the retail industry. In the 1920s, Sears evolved from a US mail-order business to one offering mass-produced goods in out-of-town stores, which had become accessible to consumers in their newly acquired cars. Woolworth (no relation to our own retail chain) also went on a rapid store expansion spree.

History does not always repeat itself, but it certainly rhymes. The retail industry has been altered globally by the rise of e-commerce. Amazon, which started off as an online purveyor of books, is now making forays into the bricks and mortar space. Similarly, Alibaba in China has evolved to expand its marketplace business to offering an experiential food shopping experience, in which shoppers can click on a number of items as they move down the aisles and get those delivered to their homes. The forthcoming listing of its financial services arm, Ant, is also a sign of China challenging the US hegemony.

Another key finding from our study is the longevity of global leaders. We tracked the current oil majors all the way back to 1885, when John D Rockefeller founded Standard Oil. The company broke up the next decade, with its offspring, Exxon and Chevron, remaining dominant industry players for more than a century. Exxon was replaced in the Dow index only this year by software sensation Salesforce. Perversely, the much-maligned Eastman Kodak, founded by George Eastman in 1888 and synonymous with the ubiquitous “Kodak moment”, remained a global leader for three-quarters of a century before failing to embrace digital photography, which led to its ignominious end in 2012.

We created a proprietary survival index to measure quantitatively how long global leaders remain at the helm of their respective industries. We had to rewind to the roaring 1920s to find a period of significant change in leadership as depicted above. The only other period that had such an equivalent sea change was the era of irrational exuberance of the late 1990s.

Our historical database also provided us with some interesting insights on the current internet giants dominating the Nasdaq. In the 1970s, the invention of the microprocessor enabled the commercialisation of the desktop computer in the 1980s. Perversely, IBM, a Dow member from the 1930s, didn’t foresee a great future for desktop computers. Microsoft capitalised on this trend and made its entry in the Dow in the 1990s. As the world wide web became the new digital super highway, the dot-com bubble provided a number of newcomers. Our index shows a huge change in global leadership for two decades as many Dow veterans failed to adapt and new giants rose out of their ashes.

When Eastman Kodak filed for Chapter 11 in 2012, many of its patents were sold to the likes of Apple, Alphabet, Facebook and Amazon. It is therefore ironic that as Kodak exited the Dow index, Apple took its place and, armed with its patents, has dominated digital photography with a major share of the 1.7-trillion photos taken digitally in 2019 alone. Though digital photography became mainstream, the winner was not digital cameras — sales have dropped 87% since 2010, according to Statista.

With the rising trend of social media and the smart tag culture, the smartphone photography ecosystem emerged. With the exponentially increasing need for storage and computation, cloud computing and GPU processing picked up the baton. About 117 years after US steel became the first billion-dollar company, in 2018 Apple became the first trillion-dollar company. Over just two years to August 2020, its market cap doubled to $2-trillion.

History shows that trends typically don’t exist in silos but cause a domino effect, igniting an ecosystem loop of global leaders. Currently the combined market cap of Apple, Amazon, Alphabet, Facebook and Microsoft is 400 times the other constituents of the S&P 500.

However, as witnessed by the breakup of Standard Oil a century ago, their dominance is often the seed of their own destruction.

French junior minister Cédric O and his Dutch counterpart Mona Keijzer say such an authority should be able to prevent tech company platforms from ...
World
9 months ago

PODCAST | How businesses have undergone a digital transformation

Vino Govender is executive for strategy, mergers & acquisition and innovation at Dark Fibre Africa
Companies
9 months ago
Next Article

Building an online store to capitalise on the Black Friday trend

Building an online store to capitalise on the Black Friday trend