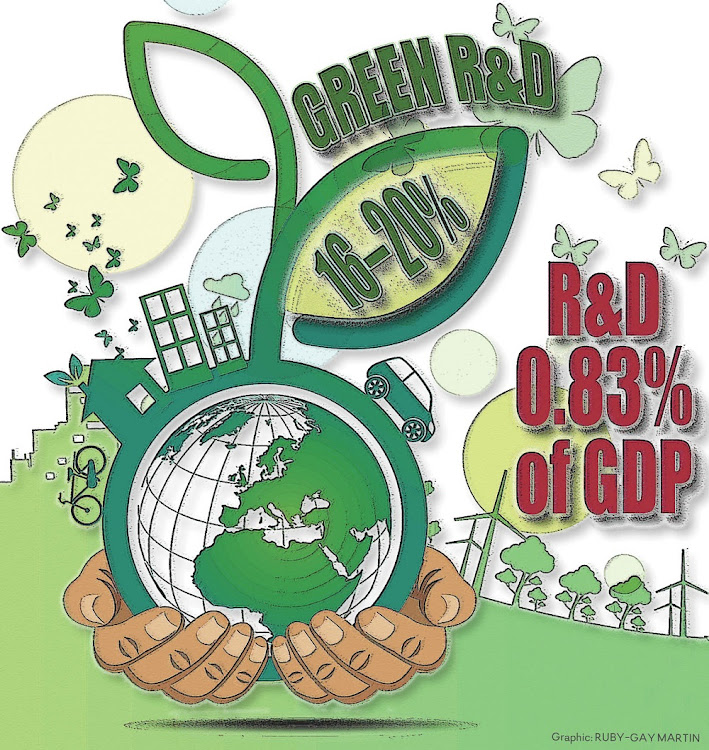 Wednesday’s medium-term budget policy statement (MTBPS) is expected to be scary and frustrating.

Scary because it will further expose the dire state of the SA economy, made worse by the coronavirus pandemic, and because it is likely to bring or signal new taxes. Frustrating because there may be little clarity on where the government plans to cut public spending programmes.

We do know that finance minister Tito Mboweni is leading the charge on reprioritisation, moving resources to the Covid-19 front-line. Let us hope that this exercise gives a serious boost to the economy, and is not just a matter of rearranging the deckchairs on the Titanic.

Of course, there is waste in government. Lots and lots of it.   And of course, we need to make better use of scarce funds. However, we also need to demonstrate vision, to plan for the future, and it is a future where science and technology and the green revolution must lead the way to greater prosperity.

If the recent past is anything to go by, there is ample cause for alarm. The target for research & development (R&D) spending in SA is 1.5% of GDP, but it now stands at about 0.83%.  The private sector is battling to stay afloat, so it is the government that must take the lead in preventing us from falling even further behind our peers.

Do we plough even more money into failing state airlines, or do we invest in the future? Of course, there is another vital dimension to all of this, the green dimension. There is no shortage of commentators urging us to use the Covid-19 crisis to give greater attention to the environment, to ensure that as we return to growth, it is green growth.

While there is all this talk of the green economy and a green-led recovery in the presidency’s employment stimulus, this just won’t happen by itself. China and the EU have both recently announced plans to go carbon neutral, even though this will take a few decades to achieve.

The EU’s Covid-19 recovery package includes action on climate change with a target of carbon neutrality by 2050. Meanwhile, China’s emissions will peak  in about 2030, with a carbon neutrality target in 2060. And in the US, Democratic presidential candidate Joe Biden has a $2-trillion stimulus package, focused on green industries and innovation.

The rest of the world is looking at an innovation-led recovery, focusing on industries such as renewables, automation, and 4IR technologies. This is not on the radar in SA. We may see a role for innovation, but the cash is just not there. We risk being left far, far behind.

All this comes at a time of exciting prospects for the hydrogen economy, with new, greener and cleaner ways of supplying power.

Under pressure from the Treasury, the departments of trade, industry & competition and science & innovation have both had to scale back their innovation incentives and other support. While there is still some state support for R&D, there is nothing that directly focuses on green R&D. The latest figures show that of the 0.83% of GDP in SA that goes on R&D, only about 16%-20% is green R&D.

That is not so much a leap towards a green revolution as a feeble crawl, while our industrial competitors zoom ahead out of sight, leaving us behind, choking in a cloud of dust.

If the outlook is bleak for business R&D, it follows that it is also bleak for green R&D. All this comes at a time of exciting prospects for the hydrogen economy, with new, greener and cleaner ways of supplying power. Then there are electric cars, green buildings, and an array of energy efficiency opportunities.

However, you must spend, spend, spend on green R&D to get there, so unless we put proper resources behind the green revolution, we will fall below our potential.  That is why government incentives must be strengthened, expanded, properly targeted, and given a stronger environmental and technology bias.

We should fight to at the least preserve the budgets of existing R&D incentives despite the dire fiscal situation — because this is an investment, not a drain on scarce resources. But how do we proceed if the cupboard is bare? While funding is ever so tight, revenue will soon be pouring in from the carbon tax as it is fully implemented. Many billions of rand.

There have been pledges that the receipts from this will be used to target the green economy, but it must be incredibly tempting to raid these funds — which have not been formally ring-fenced — to help attend to all the other desperate demands on the fiscus. The government needs to move out of the shadows on this issue.

Just as the carbon tax takes money from companies as part of our commitment to the battle against climate change, so we must also recycle the funds raised into investment in green issues. And a good chunk of that money should support green R&D. Unless we invest more in a greener, hi-tech future, the danger is that we will fall further and further behind.

While Mboweni has no shortage of concerns, history will judge him harshly if neglects the future. As well as looking at what he can afford, he must look seriously at what he can’t afford to cast aside.

• Chipfupa is a founding partner of Cova Advisory.

Streamlined processes, fair pricing and incentives for feeding back into the grid are key to success
Opinion
7 months ago

Coherent government policy will ensure exports of hydrogen-enabled chemicals, fuels and products to markets in Europe and Asia
Opinion
7 months ago

How renewables can help SA’s economy recover from Covid

How renewables can help SA’s economy recover from Covid