Collaborators in the Social Justice M-Plan conclude not only is new wine needed, but new wine skins as well 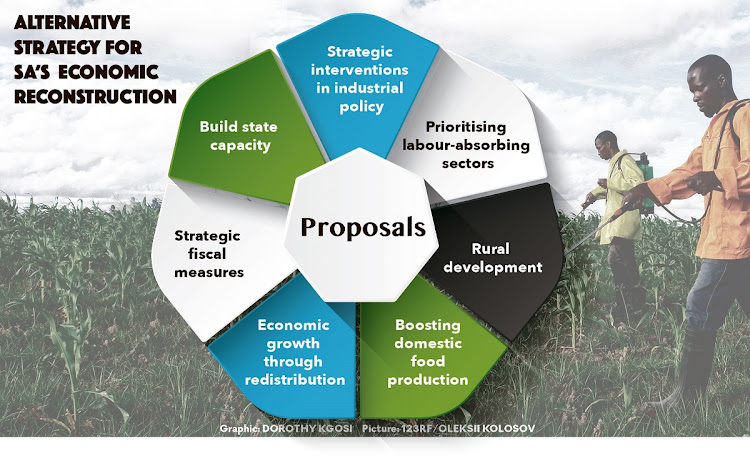 An alternative economic strategy for SA could lead to GDP doubling in 10 years, 10-million people moving out of poverty, and unemployment cut by two thirds to 12% by 2030.

More than two decades of postapartheid economic policy has delivered sluggish growth at best and insignificant gains in economic equality. Continuing on the current path, reliant on mainstream economic thinking and the use of existing microeconomic solutions, is unlikely to deliver different outcomes in future.

New thinking and a bold, innovative approach to economic policy are required to deliver the vision of the National Development Plan and deal with the triple crisis of unemployment, poverty and inequality.

Our report released this week — “New Wine into New Wine Skins: An Alternative Strategy for SA’s Economic Reconstruction” — proposes an economic framework to support the emergence of an inclusive, equitable and sustainable economy.

The outcome of a collaborative effort by policymakers, economists and academics from diverse public, private and research institutions convened under the Social Justice M-Plan by Prof Thuli Madonsela, Law Trust chair at Stellenbosch University, the framework was developed by the University of Stellenbosch Business School and the Centre for Complex Systems in Transition at the university.

It is driven by strategic interventions in industrial policy with a target of doubling the contribution of manufacturing to GDP, prioritising labour-absorbing sectors and boosting domestic food production and rural development. The framework envisages shifting policy on investment and mobilising domestic capital, fiscal policy aggressively targeted at higher economic growth, building state capacity for innovation and governance, and reshaping empowerment policies to achieve real growth through redistribution.

Economic modelling showed that continuing with “business as usual” would leave the economy stuck in low growth with continued high rates of unemployment, poverty and inequality over the next decade, while the proposed new direction would achieve an inclusive growth path, delivering real and significant benefits to the private sector and working-class and poor families.

A significant portion of the poor would be able to improve their living conditions, unemployment would decrease significantly and the domestic market expand significantly. Direct benefits to the government include a declining debt-to-GDP ratio and increasing average investment-to-GDP.

The framework proposes a new model of the state, enabled by enhanced co-ordination and supported by domestic capital mobilisation with a reduced reliance on external capital markets and financial flows. Strategic interventions:

The contribution of manufacturing to GDP is targeted to double, by shifting from primary sector activities to high-value-added goods and processing of agricultural products. A phased approach would initially develop highly labour-intensive sectors, adopting a more capital-intensive growth path over the longer term and transitioning to technology-based industrial development.

Sectors that do not hold the potential to absorb much more labour but still play a key role in value chains should be supported through employment-generation conditions in state procurement programmes.

These would link the rural farming economy to upstream and downstream value chains, and improve access to markets, including by providing state-subsidised credit to small-scale farmers.

This would include reconfiguring the role of the Public Investment Corporation (PIC), development finance institutions and public and private pension funds to mobilise domestic financial resources and drive growth through redistribution and structural reform.

Enabling debt instruments that will grow industrial and productive capacity and generate positive social outcomes are recommended, along with imposing a tax on idle capital to encourage corporations to reinvest.

Advancing economic recovery can be achieved through inflation targeting, quantitative monetary easing and lower interest rates, rather than by increasing public expenditure and tax cuts.

Fiscal stimulus should focus on sectors such as energy and those that can generate the greatest socioeconomic effects, achieving poverty alleviation alongside growth. Nondebt fiscal stimulus interventions are also recommended, including redirecting the investments of the PIC and development finance institutions, zero-rating certain items, increasing grants and restructuring the tax system.

Government officials should be supported and rewarded for innovative risk-taking (for the right reasons) and be able to work through partnerships to achieve their mandates.

An empowerment model should be driven by the Preferential Procurement Policy Framework Act to encourage and provide fiscal support to rural and township enterprises to participate in national and provincial procurement programmes.

Land transfers for agricultural and manufacturing use should be finalised to support the emergence of a new class of farmers and industrialists, while amendments to the Competition Act should be fast-tracked to limit oligopolies and open access for small locally owned retailers.

The recommended interventions aim to stimulate, stabilise and strengthen the economic framework to realise a socially just and sustainable economy.

Shifting the economy will require the consistent implementation of stimulus-orientated policies that aim to expand aggregate demand and supply while growing productivity, employment levels, and income and expenditure at the business and household levels. This provides the foundation for enhanced participation in the economy, particularly by the most marginalised.

• Dr Moleko, a development economist, is senior lecturer in managerial economics and statistics at the University of Stellenbosch Business School. Swilling is distinguished professor of sustainable development at the university’s Centre for Complex Systems in Transition.

The full report can be seen at https://www.usb.ac.za/usb_reports/new-wine-into-new-wine-skins-an-alternative-economic-strategy-for-south-africas-economic-reconstruction/

The SA economy is bouncing off its Covid-19 lows, but extensive job losses, business closures and sliding investment are eroding its longer-term ...
Features
9 months ago

When Sipho Pityana spoke at the FT Africa Summit this week, there was a tangible sense of despair at the president’s glacial pace of reform
Opinion
9 months ago

The economy must now sprint from a standing start, while following a map that meanders all over the place
Opinion
9 months ago
Next Article

President’s advisory council warns debt targets will not be met amid Covid ...

President’s advisory council warns debt targets will not be met amid Covid ...