Why going to a football match is a mad idea 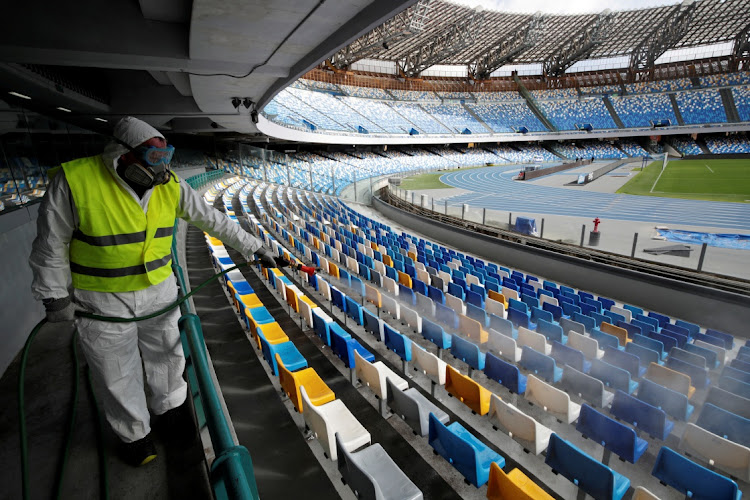 A cleaner wearing a protective suit sprays seats at the San Paolo stadium as part of measures to contain the coronavirus outbreak in Naples, Italy, March 4 2020. Picture: REUTERS/CIRO DE LUCA

The pandemic has forced almost impossible trade-offs on governments: Reopening schools risks worsening contagion, but keeping them shut means depriving children of their education and burdening the economy by forcing parents to homeschool youngsters.

Some choices are much easier than others, however. It’s not clear at all why politicians in Europe are even debating allowing larger crowds at sports events such as soccer. Much like the earlier decision to reopen nightclubs, the dangers are considerable and the gains are minuscule.

It’s best to keep fans at home right now. During the first wave of the pandemic, many European countries shut down sporting venues, and barred professional sports. As the health situation came back under control, football games resumed — and Liverpool, Juventus and Bayern Munich won their respective titles in England, Italy and Germany.

While the authorities have let footballers back on the pitch, they have been more cautious about reopening stands. In August, Bayern won Europe’s Champions League in an empty Lisbon stadium. Most football leagues restarted with severe constraints on fan numbers.

Because clubs have complained about the collapse in ticketing revenue, some governments are now taking a softer line. In Germany, where the epidemic looks relatively contained compared to the likes of Spain and France, six of the nine host teams in the country’s top league were allowed to let supporters into their debut matches of the new season, filling between 10% and 25% of the seats. In Italy, where the outbreak also looks relatively under control (so far), politicians are allowing up to 1,000 fans to attend, and debating whether to let stadiums fill a quarter of their capacity.

At the risk of disappointing soccer diehards, this is not a gamble worth taking.

It’s exceptionally hard to enforce social distancing in a stadium, as football fans enjoy gathering together, shouting and singing — all activities that make it easier to spread the virus. There is a strong possibility that football-related events have contributed to some severe outbreaks in Italy.

In February thousands of Atalanta FC supporters from the province of Bergamo descended upon the San Siro stadium in Milan to watch their players beat Valencia in the Champions League. Epidemiologists fear that this gathering may have led to the exceptional spike in cases in the Bergamo area, one of the worst-hit regions in Europe’s first wave.

In August the supporters of La Spezia football club held street parades to celebrate their first promotion to Italy’s Serie A in more than 100 years. Weeks later, the northwestern Italian city emerged as one of the Italian cities most affected by the second wave.

Allowing an event with only a few thousand people is different from filling a stadium. But even this is shortsighted. A crowd is still a crowd. The presence of even one positive Covid infection in such gatherings puts enormous strain on the tracking, tracing and testing systems with which most European countries are already struggling.

The UK has wisely backed down on an earlier plan to reopen stadiums. The risk is that these venues are opened up only to be rapidly closed down again, as happened to Italian and Spanish nightclubs in the summer. As the pandemic progresses, governments need to be highly selective over what they reopen. Schools are a priority, football is not.

Other reports suggest risks are mounting for the US economy and, despite the latest progress, legislators have failed for months to reach a deal on ...
World
9 months ago

When those in authority flout the rules, when countries don’t pay decent sick leave, and when there is no scientific support — expect pushback
Opinion
10 months ago
Next Article