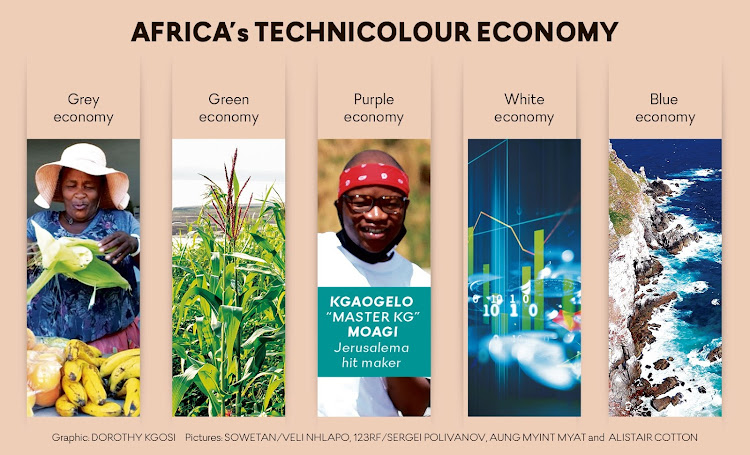 As African countries battle the fallout from Covid-19 there is a realisation that they need to radically overhaul their economic strategies. With debt, disease and dysfunction wreaking havoc across the continent, the time for fresh thinking has never been more urgent. The pandemic offers an opportunity to catalyse growth in innovative new industries. Amid strained resources and magnified challenges, colouring Africa’s economic canvas with creative solutions is required, not only to survive but to thrive.

Specifically, a holistic, clear plan to invest in Africa’s blue, green, purple, (flat) white and grey economies offers a simple, scalable and smart way to kickstart sustainable growth on the continent. For businesses and policymakers, prioritising this “five colour economy” offers significant opportunities and returns on investment, for several reasons.

First, it can catalyse growth in areas where the continent has considerable but underutilised comparative advantages. Second, it dovetails with Africa’s flagship trade and industrialisation initiative — the African Continental Free Trade Agreement. And third, it has the potential to be a huge driver of employment while simultaneously aligning with sustainability considerations. Combining these elements in a co-ordinated, strategic manner, the technicolour economy could move Africa towards a long-term higher growth trajectory.

But what exactly does the new “palette” look like in practice? Sustainable use of ocean resources underpins the blue economy. Africa has 38 coastal and island states, and a coastline of roughly 40,000km, making the continent a strategic gateway for trade. This presents an opportunity to tap into ocean and marine economies for local community inclusion and further economic development. Expansion of maritime activity — including tourism, fisheries and transportation — has the power to enhance employment, deliver food and energy security, and encourage better land waste management.

Africa’s east coast in particular stands to benefit from this opportunity thanks to the region’s Indian Ocean trade and tourism links. China has already pledged $2.7bn to aquatic investment projects in Madagascar. Somalia and Kenya, likewise, have been identified as high-potential fishery investment destinations. Similarly, SA and Mauritius are combining marine ecotourism and environmental protection policies with strategic investments and incentives to entrench the blue economy as a pillar of growth.

The twin focus objectives of the green economy — renewable energy and agriculture — have been magnified by impending pressures on food security arising from Covid-19-induced supply chain disruption and climate change. With nearly a quarter of the world’s agricultural land in Africa, and as the largest employer on the continent by sector, strategic sustainable investment in agriculture could have remarkable multiplier effects.

Africa could dramatically increase its productivity by focusing on mechanising key agricultural sectors, developing pan-African strategies for complementary production and intracontinental trade, and investing in agritech. Done right, Africa could become the breadbasket of the world, helping to feed 9-billion people by 2050. Regarding renewable energy, the Africa 2030 Roadmap for a Renewable Future predicts the continent’s energy demand requirements could triple by 2030. Investment in renewables will not only improve access to electricity and eliminate power shortages, but also create jobs and bring business and development opportunities to the rural and underdeveloped communities that need them most.

The purple economy, which includes cultural exports, is another vastly untapped growth area. According to Unesco, the global cultural economy is worth about $2-trillion and is expected to account for 10% of global GDP in “the years to come”. The industry already supports 30-million jobs worldwide, mostly held by young people, who are most at risk of unemployment.

African countries should look to the success countries such as South Korea and Japan have had in promoting fashion and music talent across the global stage, while retaining domestic ownership of the fruit of their successful cultural exports. The pandemic has accelerated the use of digital platforms, breaking down geographic barriers for content distribution.

The flat white economy represents technological and digital opportunities (the name reflects Western digital start-ups being born in coffee shops). Due to low barriers to entry and high growth potential, the flat white economy offers a rare opportunity for Africa to leapfrog the developed world — when it comes to technological disruption, a lack of existing infrastructure can be a competitive advantage. As digital transformation is expedited by Covid-19, this area is ripe for expansion. According to the World Bank, digital economic transformation could raise Africa’s GDP per capita by 1.5% and reduce poverty rates by 0.7% per annum.

Africa’s Silicon Savannah is leading the charge. The $14.5bn project in Nairobi houses the most cutting-edge tech start-ups on the continent alongside established international companies such as IBM and Microsoft. Built to encourage an exchange of ideas to grow social businesses through technology, companies such as AB3D (which turns electronic waste into 3D printed artificial limbs) have emerged.

Often seen as a dirty little secret in formal statistics, Africa’s informal grey economy is an enigma. The IMF estimates the informal sector contributes between 25% and 65% of Africa’s GDP. As much as 85.5% of employment in Africa is estimated to be in the informal market, in jobs such as street vending and unregistered taxi services, operating outside the realm of taxation (or workers’ rights). Formalising the informal economy would give workers greater protection and access to capital and credit, which in turn could accelerate economic growth and help fund public investment.

To bring the grey economy into the light, policymakers might consider India’s strategy of digitising the economy and reducing reliance on cash. The elimination of certain denominations of banknotes and the move to the national digital Aadhar identity system — required for access to bank accounts and public services and entitlements — is leaving less and less incentive for the informal sector to operate outside the law.

It is increasingly clear that to fast-track a postpandemic economic recovery Africa will need to think beyond black and white, and towards the full spectrum of quick-win opportunities ready and available in the continent’s natural and human resources. By exploring all these new shades in the African economic paintbox, future growth on the continent will go beyond Western-style “green new deals” and rather towards a “technicolour deal” — one that blends each of the five low-hanging fruits to create new markets and new opportunities through targeted investments.

• Gopaldas is a director at Signal Risk, a fellow at The Gordon Institute of Business Science and co-founder of Mindflux Training. Williams is an economist and foresight lead at Flux Trends.

Africa loses more to theft than it receives in development aid

The UNCTAD report shows Africa is a ‘net creditor to the world’, echoing economists' views that it is a net exporter of capital because of these ...
World
10 months ago

Africa loses more to theft than it receives in development aid

The UNCTAD report shows Africa is a ‘net creditor to the world’, echoing economists' views that it is a net exporter of capital because of these ...
World
10 months ago

PAUL AKIWUMI: How to beat the lack of data on illicit outflows draining Africa ...

PAUL AKIWUMI: How to beat the lack of data on illicit outflows draining Africa ...