When those in authority flout the rules, when countries don’t pay decent sick leave, and when there is no scientific support — expect pushback 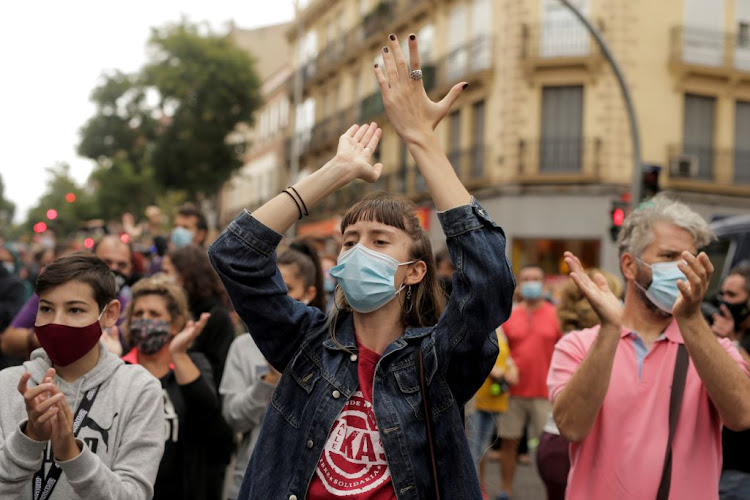 People protest over the lack of support and movement on improving working conditions amid the outbreak of Covid-19 in Madrid, Spain, on September 20 2020. Picture: REUTERS/JAVIER BARBANCHO

The history of epidemics is rife with examples of society rebelling against tough public-health edicts, such as the breach of plague quarantine in 18th-century Marseille, or protests against masks during the 1918 influenza pandemic. The grim consequence is a fresh wave of deadly infections.

Covid-19’s million deaths may pale in comparison to the estimated 50-million lives lost in 1918, but the cycle risks unfolding again. France, the UK and Spain face a triple threat: a jump in cases, a population exhausted by lockdown-induced recession, and rising resistance to tougher measures.

Curfews and closures of restaurants and bars have seen business owners literally throw their keys to the ground in present-day Marseille. In Madrid, protesters have bristled at a targeted local lockdown they view as discriminatory. It’s not just conspiracy theorists on the streets in London and Berlin who are angry.

Those protesting shouldn’t be dismissed as the selfish exceptions to the rule. Beyond the vocal minority, there are signs that the silent majority is also losing faith in increasingly bureaucratic strictures. Policymakers need to restore it.

While respect for wearing masks and personal hygiene is broadly high, according to YouGov surveys of European countries, support for quarantine and self-isolation is wavering. In France, only 48% of people currently support quarantining those who’ve had contact with infected patients, down from 78% in March. It has also fallen in the UK and Spain, though to a lesser degree.

There’s mounting evidence that people who are asked to stay at home aren’t doing so. A recent King’s College London survey in the UK of more than 30,000 people, run between March and August, found that only 18.2% reported remaining at home after developing symptoms and a measly 10.9% after being alerted by contact tracers.

The Organisation for Economic Co-operation and Development is rightly encouraging countries to extend sick leave and other benefits to more workers, especially the self-employed

That’s worrying, given the critical importance of self-isolation in breaking chains of transmission before they reach the vulnerable and the elderly.

Obviously being cooped up is nobody’s idea of fun, and it brings the psychological stress of altruistically choosing long-term pain over short-term pleasure. But for those who don’t have the luxury of jobs they can do from their kitchen table, isolation also means being deprived of a decent wage. About 10% to 11% of respondents cited “going out to work” among reasons for non-compliance.

That echoes an earlier finding that half of Britain’s low-income workers couldn’t actually afford to self-isolate because mandatory sick pay is so low, according to the Trades Union Congress. Other reasons given included caring for a vulnerable person (10%-12%) and mental stress (8%-11%).

This isn’t the case for all countries. In Austria, where quarantined workers are entitled to be paid as normal, compliance is more than 98%, according to the Washington Post. A lot of focus has been put on European countries’ approach to lockdown, but relatively little on their welfare systems, reckons Joan Ramon Villalbí of Barcelona’s Public Health Agency.

The Organisation for Economic Co-operation and Development is rightly encouraging countries to extend sick leave and other benefits to more workers, especially the self-employed. Europe should, too.

Rewarding those who self-isolate should ideally be accompanied by punishment for those who don’t. But this requires confidence in the rules and their enforcement, which has been lacking. Test-and-trace infrastructure is bursting at the seams in several countries, with delays so long that people don’t see the point in following official guidelines.

And in the UK, increasingly complex limits such as “the rule of six” are patently unenforceable, with politicians encouraging people to spy on their neighbours and rat them out. More testing capacity and rules that can actually be enforced with fines would help.

On top of carrots and sticks, transparency and education can help compliance. New rules such as closing restaurants and bars at 10pm rather than 11pm haven’t been justified with any scientifically backed explanations, the kind of thing that can chip away at public trust. Worse, some doctors reckon they may simply shift parties to private homes indoors.

This is one area where Sweden, despite criticism of its more individualist approach to stay-at-home curbs, is doing well.

Given the public is starting to lose trust in rules handed down from above, the least policymakers could do is stick to their own guidance. Yet they are proving their own worst enemy, whether it’s Dominic Cummings flouting lockdown or French prime minister Jean Castex’s feeble “I no longer take the metro” excuse for not downloading France’s contact-tracing app.

Apparently the UK government doesn’t even understand its own rules, judging by three confusing errors by officials explaining new restrictions in just three hours on Tuesday — one by Prime Minister Boris Johnson himself.

Covid-19 disobedience goes deeper than we think. Those whose fingers are hovering on the lockdown button can, and should, do more to curb it.

A sense of fatalism or a sense of invincibility? The reasons for people flouting safety rules, and common sense, have complex underpinnings
National
1 year ago
Next Article