QAnon is the Covid-19 of conspiracy theories 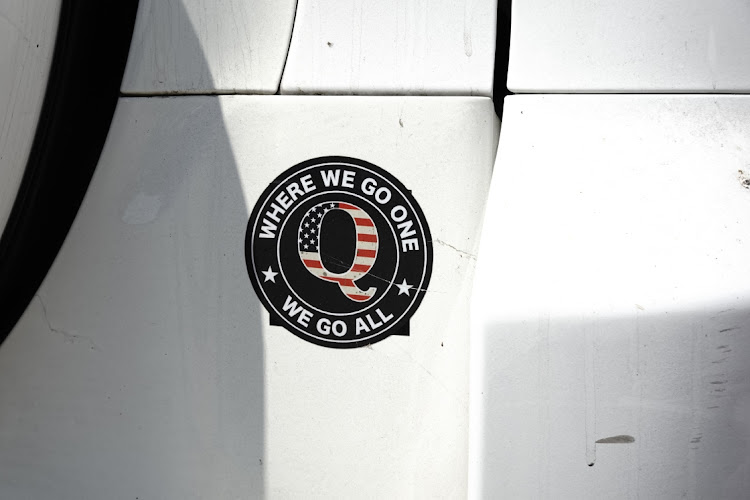 A QAnon bumper sticker in Yuma, the US, August 18 2020. Picture: BLOOMBERG/BING GUAN

There’s a vector of contagion that scares me more than SARS-CoV-2, MERS, Ebola, Zika or any other virus circulating nowadays. It’s the spread of pathological memes, also known by their more traditional name: conspiracy theories.

When the coronavirus travelled from China to other countries in 2020, the world was right to worry. An epidemic was turning into a pandemic. Now the world should be concerned that a different outbreak, called QAnon, has spread from the US to Germany and beyond.

QAnon is probably the vilest conspiracy theory since medieval Europeans — especially in times of plague — fabricated tales about Jewish people poisoning wells and drinking the blood of Christian children. Those older lies, which never entirely died out, led to centuries of pogroms and anti-Semitism. It’s too early to say what evils QAnon will cause. But the potential is huge.

Those two strands of deranged slander share some DNA. Like the old European “blood libel” narrative, QAnon recycles anti-Semitic tropes and alleges that there’s an international conspiracy of powerful and rich people running a paedophile ring that traffics, abuses and even eats children.

But QAnon, which was officially born only in 2017, is genuinely modern, like an ancient virus that’s mutated into a novel superbug. It avails itself of every newfangled social medium. It also appears designed to work like a multiplayer online game, in that followers try to solve a mystery by hunting down clues.

This game’s anonymous mastermind, called Q, sporadically deposits a “QDrop” of eclectic or cryptic information in some corner of the internet. This sends millions scavenging for titbits to confirm, interpret or extend the thread into a new narrative. Whereas most conspiracy theories oversimplify a confusing reality, QAnon thus basks in complexity. It is protean and whatever adherents want it to be, so they never need to admit they’ve been proven wrong.

In the US, this collection of memes has moved in a distinctly right-wing direction. Democrats such as Hillary Clinton or Barack Obama and celebrities such as Bill Gates or George Soros are presumed to be part of that aforementioned paedophile ring. US President Donald Trump is portrayed as their heroic antagonist, fighting the “deep state” and preparing to liberate all those enslaved children.

It wasn’t obvious that a phenomenon born in such a peculiarly American context would translate easily to other cultures. And yet it has spread like a virus to Europe and especially Germany, which is now estimated to have the world’s second-biggest QAnon movement, with hundreds of thousands of followers.

This seems puzzling at first. The US is bitterly polarised between two political parties and verging on dysfunction. Germany’s multiparty system is less polarised and the government is effective and orderly, with 72% of voters approving of Chancellor Angela Merkel. “Populism,” which is often associated with conspiracy theories, has in fact been declining. In 2018, 32.8% of Germans eligible to vote held opinions that fit this description; now only 20.9% do.

However, one lesson from Germany’s dark past is that history is sometimes made not by large and reasonable majorities but by small and mobilised minorities. The Nazi party, which also peddled conspiracy theories, won only 33.1% in Germany’s last free election, in November 1932, before Hitler seized power. Today about 30% of Germans, according to a new study, have a tendency to believe in conspiracy theories.

As in the US, QAnon in Germany appeals to a hodgepodge of fringe groups, including antivaxxers and left-wing esoterics, but overall it skews sharply right. While 74% of Germans have a negative view of Trump, German followers of Q adore him. QAnon also appears to have merged with older and proto-Nazi conspiracy theories. One example is the movement of Reichsbürger (“Imperial Citizens”), who believe they’re subjects of the old Reich (either the Kaiser’s or Hitler’s) and that today’s Federal Republic is actually a corporation formed by the Allied victors of World War 2.

This explains the bizarre iconography on display at the huge rallies that have recently taken place in Germany, ostensibly to protest against coronavirus restrictions. These gatherings teem with shirts, banners, hashtags and other symbols associated with Q or Trump. Protesters often carry the black-white-red flag of Imperial Germany and other far-right symbols. At one recent protest, a right-wing mob tried to symbolically storm the Reichstag, which houses parliament.

Whatever its origins, QAnon has exposed a vulnerability in democratic societies not unlike the medical and economic weaknesses laid bare by the coronavirus. It has shown that we no longer share one civic and informational space, but live in alternate realities. In that sense, conspiracy theories are our “metaproblem” — the problem that prevents us from solving any other, from pandemics to climate change. For if anything is possible, nothing can be too ridiculous, and nothing can be true either.