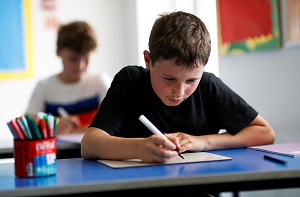 Sara Vickery-Bragg has a company in London preparing mail-order gift boxes and her husband runs his own technology firm. They have also been nannies, teachers and entertainers for two small children since March.

As for so many parents, that combination of roles is finally about to end in the UK as most of England’s 24,000 schools reopen over the next week, a critical moment in getting the country back to work and the economy out of the worst slump for centuries. For Vickery-Bragg, sending her four-year-old son for his first day of term means no longer having to frantically pack orders while the children are watching television or eating dinner.

“It’s more time than I’ve had in six months so it will feel like a bit of a luxury,” said Vickery-Bragg, who is now seeking a nursery place for her toddler. Returning to normal “is not going to be overnight, but I feel like anything that makes working life easier is just something to be grateful for at the moment”.

The juggle of work and children resonates across the world in the era of coronavirus, but the reopening of schools in Britain has taken on greater political and economic significance because the country has been hit by the pandemic more than anywhere else in Europe. Getting pupils back into the classroom is now paramount to avoiding deeper pain rather than simply a calculated risk.

Prime Minister Boris Johnson is already facing a public inquiry over his handling of the crisis, while chaos in August over grading for school leavers also cost his governing Conservatives in the polls. A U-turn over face coverings in high schools saw education secretary Gavin Williamson field another barrage of criticism, even from within the party.

Reopening schools could provide a 3.3% boost to the economy, equivalent to £70bn a year, according to the Centre for Economics and Business Research. The report, published on Monday, said as many as 5% more employees would be able to return to their workplaces.

The UK has experienced the biggest drop in employment since the global financial crisis and, unlike Germany, is preparing to end a furlough programme. The government is starting a publicity campaign this week to get people back into offices as job losses mount at retailers in city centres.

A study by academics in Cambridge, Oxford and Zurich found that women are particularly vulnerable, with more of them likely to have requested state aid to cover their income.

The hope is that parents are not only freed up to increase output from home, but also to return to the workplace and nearby gyms, sandwich shops and pubs

Schools and nurseries now need to be up and running smoothly by the time the programme runs out in October, said Christopher Rauh, a Cambridge University economics lecturer and one of the report’s authors.

“If this double-whammy happens, we’re going to see either enforced layoffs or voluntary layoffs pretty quickly, because there will be no other options,” he said.

Teachers have expressed their anxieties about going back to work, a sense of not being prepared for the challenge of keeping children apart and dealing with potential Covid-19 cases in schools.

The government says it’s confident that guidelines will ensure the safety of pupils and staff, with staggered starts and some social-distancing. It pointed to data from the UK Office for National Statistics showing the overwhelming majority of parents are comfortable sending their children back.

A report published on Friday found that all children who died of Covid-19 were already seriously ill. It was based on a study of 260 hospitals in England, Wales and Scotland.

In an open letter to parents at the weekend, Williamson warned that keeping children away from school could jeopardise their future prospects. He told the Daily Telegraph on Tuesday there could be a “short delay” to examinations in England next summer to allow pupils to catch up on lost teaching time.

Johnson made a direct appeal to families on August 24, when he said the risk of contracting Covid-19 in school is “very small” and it is “far more damaging” for a child’s development and well-being to stay at home. He previously said it would be “economically unsustainable” to keep schools closed.

The hope is that parents are not only freed up to increase output from home, but also to return to the workplace and nearby gyms, sandwich shops and pubs. In London, less than half of employees are back, Google data shows. Use of public transport remains 44% below the baseline set before Covid-19 rocked the economy, according to the figures.

But reopening schools isn’t likely to be a quick fix. Many schools are choosing not to immediately set up wraparound childcare because of the difficulties in mixing class “bubbles”.

Carley Taylor, a dental nurse from Camberley in southern England. whose two sons aged seven and 13 are going back to school, said she is preparing to cut her days short to pick up her youngest. She is unlikely to see her first patient before 10am and would have to finish work at 2.45pm, effectively cutting her pre-coronavirus workday in half.

Parents of young children also face the prospect of repeated coronavirus testing as they contract coughs and colds when they come into contact with their peers after months of staying at home. One headteacher of a primary school in Surrey, who asked not to be named, said any pupil with a fever would be moved to a designated room to wait to be taken home. They would not be allowed back in school for 10 days or until they could produce a negative test.

In Scotland, where schools returned in mid-August, more than 17,500 pupils were tested for the virus in a week, with 49 testing positive. High school pupils in Scotland are required to wear masks in communal areas, but in England it will be at the discretion of the head teacher unless the school is in a local lockdown area.

There are also issues with staggered drop-offs and pick-ups shortening the working day, particularly for people with more than one child at school. Some parents will see their children only going in one day a week at first, with the number of days rising in the coming weeks.

Sara McCorquodale, who runs a company providing insights to brands about social media influencers, is just glad for some respite for both her and the family after domestic and work life merged during lockdown. She has been juggling her business, Corq, with her two sons aged one and six. The elder is returning to school to start his third year.

“It has been incredibly hard — the phone is ringing or I have commitments with work or his baby brother is crying — and I think just for him to have that six hours focused on him will be really valuable,” she said. “Finally, I’ll be able to separate home and work more.”

Covid-19 escapes detection in children unless extensive testing is done

A surveillance plan that tests only symptomatic children will fail to identify children who are silently shedding the virus while moving about their ...
World
1 year ago

The DA, which controls the Western Cape, has said it will consider approaching the courts to challenge the decision
National
1 year ago

Reducing community transmission of Covid-19 might mean reimposing some lockdowns, and may mean shutting pubs so schools can stay open
Opinion
1 year ago

As US institutions flounder, Uruguay and Denmark are the countries to follow, not Israel
Opinion
1 year ago
Next Article

Why Boris Johnson is so eager to reopen UK schools

Why Boris Johnson is so eager to reopen UK schools