At the end of his day, Putin knows that Nato will not go to war over Belarus just as it did not over Ukraine 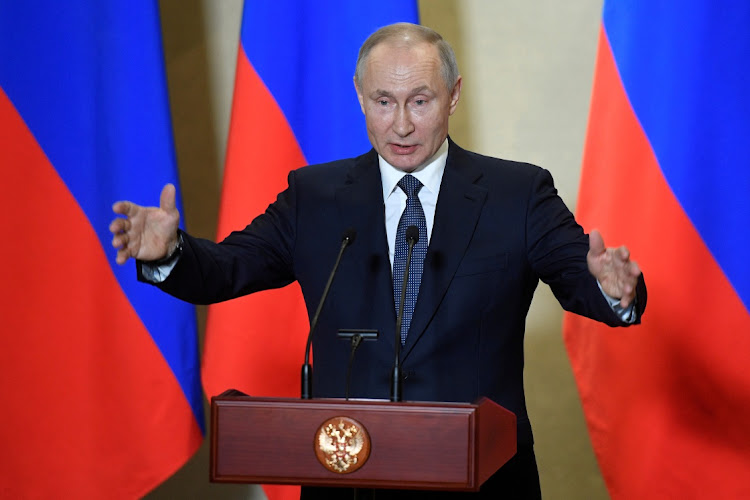 It’s hard to think of anything more ominous than Russian President Vladimir Putin offering you his “assistance” so you can “resolve the problems” that are keeping you busy. But that’s what Putin has just promised to Alexander Lukashenko, the embattled and apparently fading dictator of Belarus.

As the post-Soviet state, wedged awkwardly between the EU and Nato on one side and Russia on the other, struggles for its freedom, it’s worth keeping in mind who will ultimately decide its future.

That person isn’t Lukashenko. Since 1994 he’s tried every dirty trick to stay in power — locking up opponents, rigging the system and cracking down brutally on demonstrators. But even he must know the game’s finally up. Despite claiming to have won the August 9 presidential election by a ludicrous 80%, he pretty clearly lost it. His thugs have failed to cow Belarusians. Instead, countless heroic women have continued marching dressed in white, the colour of their resistance, and inspiring ever more of their compatriots to rise up.

Nor is Svetlana Tikhanovskaya the person who can determine Belarus’s future. She’s the de facto opposition leader who apparently won the election but has been exiled since last week in neighbouring Lithuania, probably to assure the safety of her children, whom she had sent out of Belarus even earlier.

A moral beacon, she can inspire Belarusians to keep resisting. And if the revolution succeeds, she can return, free her husband and other political prisoners, and hold new and fair elections. But she doesn’t wield the hard power needed to make the country’s liberation credible and lasting.

No, the person who will have the last word is Putin. In a week when the world wants to cheer on the valiant Belarusians struggling for liberty, this is painful to admit. But not doing so would be self-deception.

Putin has long been driven by two things: increasing his own personal power and reassembling the “Russian world” that was lost when the Soviet Union broke up, which he considers “the greatest geopolitical catastrophe of the century.” From his point of view, the West — embodied in Nato and the EU — has been steadily encroaching on Russia’s sphere of influence and must be pushed back.

That’s why he’s been the enemy of all “colour revolutions” in post-Soviet states, starting with Georgia’s in 2003. He can’t afford to allow Eastern Europe or the South Caucasus to become democratic, free, prosperous and pro-European, for that would undermine Russia’s — meaning his — claim to “Eurasian” leadership.

The result has been a belt of semi-failed states in the region. There are “frozen conflicts,” as in Georgia and Moldova, where Putin keeps meddling and bullying. And there is of course the simmering war in Ukraine. In 2014, its people kicked out their Russian-puppet autocrat to become democratic and Western, only for Putin to snatch Crimea and infiltrate eastern Ukraine with hybrid warfare that continues.

It’s simply implausible that Putin would stand idly by as Belarus tries to become democratic and free. He sees its language, culture and identity — like Ukraine’s — as a poor relation of Russia’s. And he has a keen historical sense of needing Belarus as a buffer to Western Europe — both Napoleon and Hitler went through it to invade Russia.

But Belarus has an even more powerful hold on Putin’s irredentist imagination. It’s where he has long wanted to start reassembling the “Russian world,” based on a 21-year-old plan to merge Belarus and Russia into one union state — ruled by him, it goes without saying.

With this goal uppermost in his mind, Putin’s long been irked by Lukashenko, who’s nominally pro-Kremlin but has been dragging his feet on the Union State plans. Putin considers him a mediocrity whose only use has been to prevent a democratic turn in Belarus. If Lukashenko can’t even do that, Putin will drop him in a minute.

Nobody knows what will happen next. Putin and Lukashenko have already insinuated that the Belarusian protests are instigated by the West, a standard trope in their propaganda. Ludicrously, they’re even suggesting that Nato is massing troops on Belarus’s western border, to give themselves the excuse of deploying their own military forces. Lukashenko may throw himself at Putin’s mercy and consign Belarus to the Union State after all.

But if Lukashenko is driven out of Belarus sooner, Putin may have to resort to his Ukrainian playbook. He may send “little green men” — Russians in unmarked uniforms — into the country, overwhelm the media at home and abroad with disinformation, cut off the Russian oil and gas keeping Belarus’s lights on, or simply invade outright.

And nothing the EU or US says or does will stop him. The West has already levied sanctions against him since his invasion of Crimea; adding a few more won’t impress this KGB-trained modern tsar. At the end of his day, Putin knows that Nato won’t go to war over Belarus just as it didn’t over Ukraine.

In the cold vocabulary of strategic studies, Putin knows that he has “escalation dominance.” He, and not the West, can decide when to ratchet up to the next level of hostility, because he’ll always be prepared to go one step further than the West.

Lovers of freedom may soon shed tears of joy at the liberation of Belarus, only to find themselves weeping over its renewed subjugation.

She fled to Lithuania last week, saying she had done so for the safety of her children, as antigovernment protests continue
World
2 years ago
Next Article