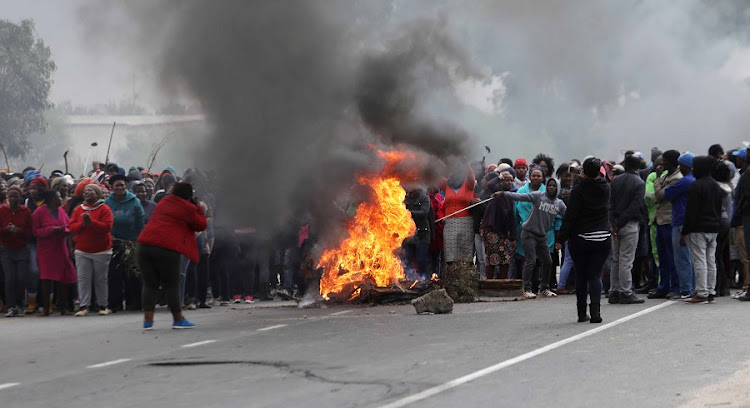 Since March, material conditions have worsened significantly for most of the population. SA is well known for its protests, and in normal circumstances one might expect heightened conflict. Yet in practice most protests have been prohibited under state of disaster regulations and senior politicians have warned that marches spread coronavirus. So what is the reality of protest action under lockdown, and what is likely to happen in future?

Before answering these questions it is necessary to explain how we reached our conclusions. For 1997-2013 analysis of protests could draw on data released by the SA Police Service (SAPS), and this yielded a quantity and quality of information not matched anywhere in the world. For the period from 2012 statistics are derived from the international Armed Conflict Location & Event Data (Acled) project.

Acled is assiduous and rigorous but it is overwhelmingly dependent on media reports, which cover only a small minority of protests. Comparing our analyses of Acled and SAPS data for 2012 and 2013 we found that SAPS protests outnumbered Acled protests by more than seven to 1.

There are several biases in media data. In particular, it is especially poor at capturing industrial protests, including strikes, and is inclined to ignore orderly protests. Despite its weaknesses, media data, specifically that gathered by Acled, is valuable for assessing trends.

Acled provides real-time data with notes on events and sources of evidence. Rather than rely on dashboard categories, which are applied inconsistently, we have worked with these notes, a painstaking task. For this, a protest was defined as “a popular mobilisation in support of a collective grievance”. Rather than limiting ourselves to overall numbers of protests, we also investigated the grievances and the actors (those mobilised).

Largely as a consequence of student mobilisations there was a bulge in protest action in 2015 and 2016. The increase in 2019 is much steeper, reaching a total of 1,473 protests recorded by Acled. Of these, using our categorisation of actors, 602 involved “residents”, up from 175 the year before (which is close to the average for 2012 to 2018). In the past, we would have termed these “community protests”. Most were about service delivery.

The decline in the number of weekly protests that occurred in March is dramatic, but that is partly because the peak in February was exceptional. There were 75 protests in January, quite a low number but not uncommonly so — people were gradually returning after their annual break. Then there was a phenomenal rise in February. A short month, yet 250 protests were recorded, more than in any month in 2019. It seemed we were heading towards a new peak in 2020.

The number was still high in the first week of March. Then, news of Covid-19 spread, the state of national disaster was declared on March 15, and lockdown was announced and then implemented on March 26. The number of protests came tumbling down. Acled did not record a single protest in the last five days of March. In the end there were still 92 protests in March, but only 33 in April. Since then there has been an upward trend, with 74 in May, 144 in June and 141 in July (a figure that might increase slightly with late recording).

To interpret this pattern of events, we can start with the actors. In our broader analysis we use 10 categories, applying them to countries across the continent. These are residents, workers, students, rights activists, political, religious/cultural/ethnic, youth, other, multiple and unspecified. In SA, the actors seen most frequently in Acled data come from the first three categories. The huge rise in protests that occurred from the end of January to the beginning of March was largely a consequence of mobilisation by residents (community protests) and by students.

Among workers, throughout the period there was a trickle of disputes about workplace issues, often related to pay. There is a noticeable dip in April, the period of level 5 lockdown, when many workers were excluded from jobs and restrictions constrained organisational activity. These problems persisted to a degree, but there was a rise in the number of Covid-related disputes. The first of these were as early as March 12, with demonstrations at two hospitals over shortages of personal protective equipment.

These and many Covid disputes that followed were in the Eastern Cape. At the end of June there were also several protests involving taxi drivers, whose employers demanded state funds and/or the right to increase carrying capacity. In July there were protests by public sector workers over pay, and by restaurant workers seeking to protect their livelihoods.

Students raised a range of issues, but the most common related to administration of the National Student Financial Aid Scheme. Many protests were away from well-known universities and attracted limited media attention. But on the weekend of March 15, on-campus teaching was halted and residences were closed. Unsurprisingly, protests stopped.

The majority of protests by residents were about services. Lack of water was the predominant concern early in the year. Later on, with colder weather, disconnections and outages, electricity came to the fore. Criticism of councillors and demands over boundaries made appearances.

The second most common grouping of grievances was about crime — sometimes protests against policing, sometimes attacks on presumed criminals. There were many protests around gender-based violence, and this was the most commonly cited grievance in July. There was also some action against “foreigners”, specifically in road haulage, but xenophobia also appears alongside other grievances.

Under lockdown food became a major issue, with protests often taking the form of riots or attacks on trucks. There was also action around land and housing. Sometimes residents demanded relocation that was previously promised; sometimes, particularly recently, action was around forced “dedensification”; and sometimes residents mobilised against a “land invasion”. In July there were also numerous protests calling for the closure of schools. As in the past, protests often involved barricades of stones and burning tyres, and as in the past there is frequent use of rubber bullets by police.

The analysis presented here suggests we are likely to witness a rising level of protests, at least by “residents”. Indeed, on August 1 the C19 People’s Coalition and its allies mobilised about 40 protests over various issues associated with the pandemic and lockdown. Individually the protests were quite small (only one involved more than 200 participants), but they were probably more widespread geographically than any similar action since the end of apartheid.

It is possible that increased unemployment will undermine the confidence and capacity of workers to organise. Among students there is resentment about the way online teaching discriminates against poorer students, but we are unlikely to see an upsurge in action during 2020.

In the communities, however, the service delivery issues that fuelled the February protests remain. Further, poverty and unemployment have worsened, hunger has deepened and is more pervasive, and class divisions are even more stark. Deaths from Covid-19 are likely to be proportionately greater in deprived areas. There is evidence of corruption, and the government is widely regarded as acting against the working class.

• Alexander is professor of sociology and holds the SA Research Chair in Social Change at the University of Johannesburg. Lenka is a research assistant at the university's Centre for Social Change.

After the oppressive years, should the law treat everyone the same? Can this yield a socially just society?
Opinion
8 months ago

GENEVIEVE QUINTAL: State of disaster now a disaster of a state

The talking has been done: it is time for strong, effective action from our government
Opinion
8 months ago

SA’s leaders have managed to turn an emergency into a disaster, with trust gone and corruption the new normal
Opinion
8 months ago
Next Article

ALLAN SECCOMBE: The final straw is being laid

ALLAN SECCOMBE: The final straw is being laid