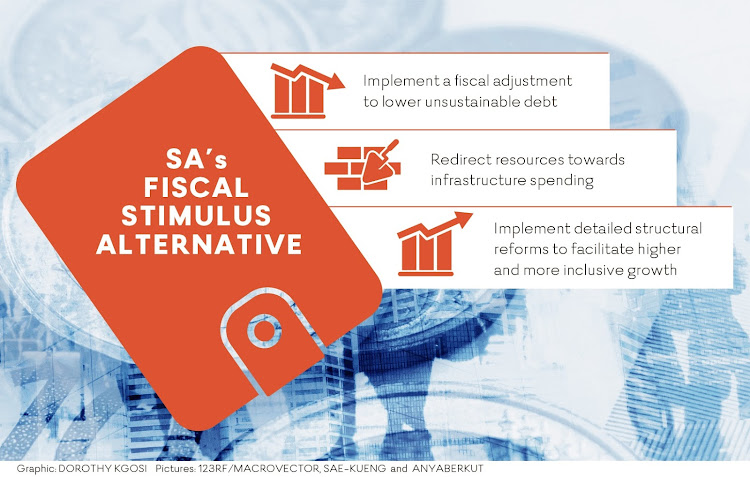 There have been several calls for a large fiscal stimulus to support SA’s post-Covid recovery. While this seems reasonable, before SA can embark on a fiscal stimulus we need to answer two questions: can we afford it? And will additional spending raise economic growth?

The available evidence indicates the answer to both questions is, no. Though the recent supplementary budget allows for a substantial temporary increase in debt and spending in response to Covid-19, some have suggested the short-term increase in non-interest expenditure is insufficient. This is misleading, as it ignores the additional tax relief, the drawing down of government’s balance sheet through the temporary employee relief scheme, the introduction of the credit guarantee scheme and the monetary policy response. These measures provide immediate and direct relief to businesses to maintain productive capacity and support vulnerable and low-income households.

That being said, is a larger and more permanent fiscal stimulus required to support the post-Covid economy? Turning to the first question: can SA afford a fiscal stimulus? To pay for a stimulus, a country can rely on conventional or unconventional methods. Conventional methods include raising taxes or increasing borrowing. Selling assets is another, but it only delivers a one-off boost to revenue, it is complex to execute because government assets are scattered across different entities, and it is unclear how much revenue it will raise.

Unconventional methods include accessing the broader balance sheet of the government by drawing down unemployment insurance fund surpluses, accessing reserves held by the central bank or allowing workers to access their pension fund savings.

Let’s consider the conventional methods first. Raising taxes to pay for a fiscal stimulus will not work because tax increases reduce current income for firms and households and thereby constrain aggregate demand and investment. Large tax increases over the past six years have been less and less effective, and there are no obvious gaps in the tax system that could generate sufficient increases in revenue. Paper evidence indicates there is little scope for raising marginal rates on high-income earners further without decreasing revenue collected. We also know tax multipliers are large and negative, which means tax increases could result in a further contraction in economic growth.

What about more borrowing? As the gap between revenue and spending has widened each year since 2008 higher borrowing has been required. Debt-service costs have been the fastest-growing area of spending: in rand terms we spend as much on servicing debt as we do on social development. There are signs that our lenders are concerned that we cannot pay back the money we have borrowed. Since the beginning of the year the rand has depreciated by 16.5% against the US dollar, the risk premium has increased from 3.2% to 5.3%, and the cost of insuring SA’s debt against default has increased from 1.6% to 3.1%. Without a fiscal adjustment, these developments point to a sovereign debt crisis for SA.

Some argue that the central bank should reassure our lenders by buying more government bonds. For a short while central bank intervention may cause an increase in demand for our bonds, keeping bond prices up and yields down. However, as economic growth continues to disappoint lenders will soon determine that the government is unlikely to have the tax revenues to service debt, and they will stop wanting to hold our debt. Bond prices will fall and interest rates will rise. Without a credible fiscal adjustment strategy central bank intervention will result in severe currency weakness, unsustainably high inflation and a sufficient deterioration in our macroeconomic fundamentals.

Should SA attempt more of the unconventional methods that have been proposed? Without considering these in detail, further experimentation is very risky because without higher economic growth the government would have significantly weakened its own balance sheet without any permanent improvement in the economy.

This brings us to the final and most important question: whether financed through conventional or unconventional methods, can a fiscal stimulus raise economic growth over the long term? After all, some economists argue that the obsession with debt means we are missing the bigger picture: the fiscal stimulus will pay for itself by raising economic growth. Put differently, central bank purchases of government bonds will be temporary because the government spending they finance will lead to higher growth.

We also know high-debt countries have lower multipliers. For example, Ethan Ilzetzki and his co-authors have found that countries with a debt-to-GDP ratio above 60% have a short-run multiplier of 0 and a long-run multiplier of -3. While this finding seems counterintuitive, the reason is that fiscal expansion accompanied by rising interest rates and debt service costs lowers private investment, aggregate demand and economic growth.

In a paper released through “Southern Africa — Towards Inclusive Economic Development (SA-TIED)”, Harri Kemp found, using a variety of identification approaches and model specifications, that SA’s average long-term government spending multiplier is 0.27. This means that for every rand spent GDP increases by an average of 27c. He also finds that multipliers are larger during a recession, but still less than one.

In a second paper, Kemp and Hylton Hollander control for the response of households and businesses to changes in fiscal policy over time by using a dynamic stochastic general equilibrium model. They estimate separate multipliers for government consumption and investment spending and find that both are below one, and that investment multipliers are higher than consumption multipliers.

Three explanations for these low fiscal multipliers stand out. First, unsustainable spending increases do not boost economic growth because higher debt service costs crowd out important economic and social expenditure. Second, the composition of SA’s government spending is not conducive to growth because the government’s contribution to investment has declined as municipalities and state-owned companies reduced capital spending over time. Third, structural constraints, such as the lack of affordable and reliable electricity and unavailability of telecommunications spectrum, constrain the ability of government spending to crowd in private sector investment.

The call for a fiscal stimulus is therefore inconsistent with a balanced reading of the more recent evidence, especially those studies that take debt dynamics into account. What, then, is the alternative?

First, SA should implement a fiscal adjustment to lower unsustainable debt. Second, we should redirect resources towards infrastructure spending to support long-run growth in a manner that crowds in private sector spending and expertise. Third, these efforts should be accompanied by implementing the detailed structural reforms outlined in the government’s policy document “Economic Transformation, Inclusive Growth, and Competitiveness: Towards an Economic Strategy for SA” to facilitate higher and more inclusive growth.

• Dr Pieterse is responsible for economic policy at the National Treasury.

If global inflows from global QE are combined with domestic QE, the combined domestic liquidity can cause an asset price bubble to burst, writes ...
Opinion
9 months ago

AYABONGA CAWE: Aggressive debt reduction is like fixing deck chairs on the Mendi

LUKANYO MNYANDA: Plans, plans and more plans is all the ANC ever manages

Just lifting aggregate demand is not a development strategy

Both the Treasury and its critics seem to fall short in adequately justifying their arguments with recourse to robust literature, writes Adam ...
Opinion
8 months ago
Next Article