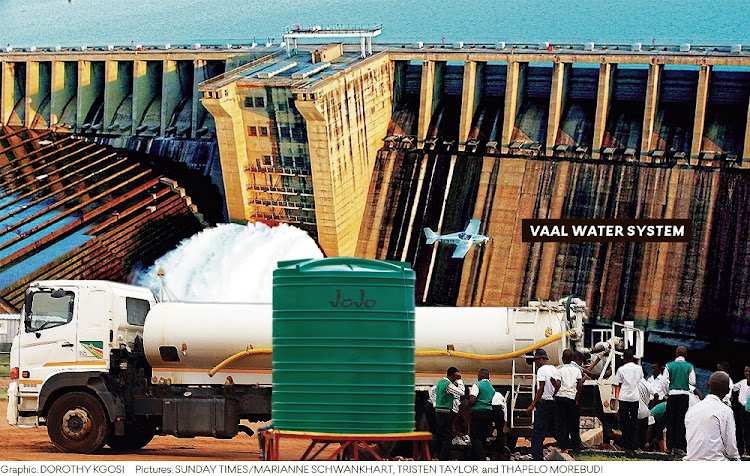 Globally, governments are now urged to focus on disaster risk reduction rather than acting only when disasters occur. But when disaster strikes long-term priorities invariably go out of the window. That’s why Gauteng and surrounding regions are stumbling into a slow-onset Day Zero water crisis.

The Covid-19 emergency programme to deploy tanks and tankers to places where municipal water supplies have failed is diverting the department of water & sanitation’s top management from their long-term priority of keeping the country water secure.

Specifically, Covid-19 is distracting us from the looming threat of an entirely predictable Day Zero drought that could strangle the SA economy. Implementation of the Polihali Dam, Phase 2 of the Lesotho Highlands Water project in Lesotho, is slipping into a further round of delays and cost increases. And every year it is delayed makes it more likely that we will repeat Cape Town’s painful self-inflicted drought disaster.

An aerial view shows residents of the sprawling informal settlement on the outskirts of Lawley, Johannesburg on April 24 2020, queueing to fetch water from a tank installed by the municipality to help them cope with water scarcity. Picture: AFP/MARCO LONGARI

Gauteng and much of the surrounding region gets its water from the interconnected dams and rivers that make up the integrated Vaal River system. That is perhaps 20-million people and almost half the SA economy, all of which is already at risk.

The region is already using all the water the system can reliably provide, but population and water demand are growing at 3% annually. There will be little extra available until Polihali is completed, which was originally planned for 2020. The slow-onset institutional disaster that had rendered the department increasingly dysfunctional over the past decade has already delayed Polihali until 2026 and substantially increased its cost.

Now there is the threat of a further two-year delay. Preparatory work on the project has started. Access roads as well as power and communications links are being built to the project site in a remote Lesotho valley. Painstaking negotiations are going on over compensation for the few hundred families who will be displaced. Locally based consortia, including international partners, have been contracted to design and supervise the construction of the Polihali Dam (which will be the fourth-tallest in Africa) as well as that of the tunnel that will send water towards the Vaal. Hundreds of millions of rand have already been spent.

But progress is stalling. The award of preparatory phase contracts to build housing for the hundreds of construction workers has been delayed for six months. Apparently, adjudication procedures were not followed to the letter, though prices and qualifications of bidders are not being challenged. If the construction of the main works starts on schedule, Gauteng water users will be paying extra for temporary accommodation.

Now a more serious set of problems has emerged. The contracts to design and supervise the building of the dam and tunnel have also been questioned. The award was made before external funding agencies were on board and they have requested changes to supervision arrangements and the process to contract the companies that will actually build the works.

These changes will cause further delays. So even if things run smoothly from here, the project will not be ready until end of 2027 at the earliest. That will put Vaal system water users at risk of Day Zero Mk 2 for even longer. But things are not running smoothly. SA officials appear reluctant to take the decisions needed to allow the project to go ahead.

This is understandable given the department’s history. A perverse consequence of corruption is that even the remedy is damaging if it fosters a culture of supercautious compliance. When the auditor-general says officials will be held personally liable for any irregular decisions, their obvious response is to avoid taking decisions.

In a project that is as technically and institutionally complex as LHWP2 (the second phase of the Lesotho Highlands Water Project), timely, well-informed decision-making is critical. But this needs empowered, competently staffed management structures that can deal with the procedural as well as the technical issues.

To its credit, Lesotho has built an effective organisation, the Lesotho Highlands Development Authority (LHDA), to take responsibility for the construction and management of the infrastructure in Lesotho. The LHDA has strong governance and a professional, independently staffed, project management unit to ensure work proceeds properly.

Since two countries are involved, each has to look after its own interests. Important LHDA decisions are overseen by the representatives of both governments. This is the responsibility of the Lesotho Highlands Water Commission, to which both countries appoint delegates.

In terms of the intergovernmental treaty that governs the project, SA’s Trans-Caledon Tunnel Authority (TCTA) raises the finance and looks after infrastructure on the SA side. It also provides technical support to the commission. But oversight requires high-level technical and contract management skills. After repeated interference by previous ministers, SA’s team in Maseru is weak. Its members refer many decisions to the department in Pretoria, where they often stall for months because there too capacity is limited.

Effective management of this project requires day-to-day engagement and clear lines of accountability, not remote, top-down decisions. A draft project charter sets out delegations and accountability to allow decisions to be made rapidly while retaining oversight and control. But it has been awaiting approval for more than two years.

Meanwhile, water supplies to Gauteng municipalities are already being restricted. Rand Water is holding back on some network expansions because there will simply not be enough water to put in the pipes to meet new demand.

In this already difficult environment, Covid-19 was a bombshell. Yet the overarching problem is not the disruption of preparatory work in Lesotho but the diversion of policy attention to other priorities, such as the department being seen to provide hand-washing water.

Deploying tanks and tankers is not an appropriate way to provide water, except to cover short-term supply interruptions. During an epidemic tankered supplies to rural areas are as likely to bring health problems as to prevent them by enabling occasional hand washing. Irregular supplies mean that when a tanker arrives, with driver and assistant from town, people crowd around with their jerry cans.

The pitiful amount of water they get is hardly enough to encourage regular hand washing. Reports to parliament suggest the average provided has been just more than 5l per person per day — far less than the 25l to which the government is committed as a basic minimum.

These tankered supplies cost nearly 100 times more than water from the Vaal River System. They also encourage the water mashonisas, who have contributed to water crises by deliberately destroying water infrastructure. But even the mashonisas are usually cheaper, selling a 200l drum for R20. The R600m being spent on tanks and tankering over six months should rather have been used to rehabilitate the municipal infrastructure, which has been allowed to collapse.

But most critical have been the opportunity costs of diverting top management attention from its long-term priority of keeping the country water secure. If the Vaal system’s supply fails, those costs will be astronomical — one more consequence of prioritising the urgent over the important.

• Muller, a visiting adjunct professor at the Wits School of Governance and part-time adviser to the water & sanitation minister, chairs the Water Institute of Southern Africa’s technical committee. He writes in his personal capacity.

Pandemic adds to the drain on bottled water

With a list of 55 schemes, the initiative runs the risk of once again overpromising and underdelivering
Opinion
8 months ago

We need to confront infrastructure and governance constraints that have hindered the growth of agriculture over the past two decades, write Wandile ...
Opinion
8 months ago

Zero Mass will initially only be able to produce up to 2.3-million litres a year — about the volume of a typical Olympic swimming pool
Companies
9 months ago
Next Article