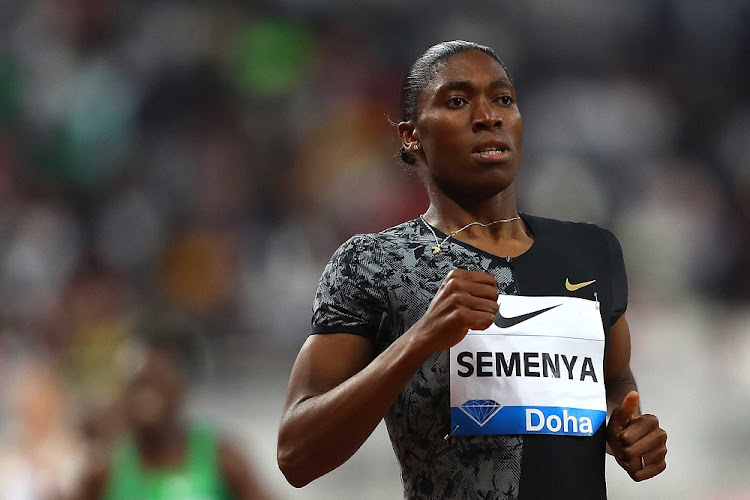 Caster Semenya races to the line to win the Women's 800 meters during the IAAF Diamond League event at the Khalifa International Stadium in Doha on May 03 2019. Picture: FRANCOIS NEL/GETTY IMAGES

While the world tackles systemic racism head on, I've been contemplating Caster Semenya’s own “fight to breathe” and the challenges of black female athletes in the international sporting arena in general.

As Semenya’s legal team we await the decision to our appeal case before the Swiss Supreme Court of Appeal in Switzerland, which seeks to overturn the Court of Arbitration in Sport (CAS) ruling that requires women athletes with so-called “differences of sex development” (DSD) to chemically or surgically — and dangerously — lower their testosterone levels so they can compete as women in women’s elite races.

In addition, the UN Human Rights Council is this week contemplating the adoption of an SA-sponsored resolution entitled, “Elimination of discrimination against women and girls in sport,” which was submitted in February 2019. The resolution aims to, among other things, recognise the potential value of sport as a universal language that contributes to educating people on the value of respect, dignity, diversity, equality, tolerance and fairness.

One of the places where we have argued Semenya’s case is in the city of Lausanne, one of the wealthiest and most exclusive cities in Europe, which represents the giants of the sporting world. That some “can’t breathe” there unless they have a princely sum in dollars and a battery of lawyers has certainly been true in Semenya’s case. It’s in exclusive places like these, which hold the pen on global policies and regulations, that fairness and inclusion are especially important.

Black women face unique giants in the international sports arena. Race science has, for decades, targeted black women, putting roadblocks in their pathways to competing on the international stage. Tennis champion Serena Williams has endured similar treatment to Semenya, and in 2018 complained of invasive doping tests. Even though she’s never tested positive for doping, Williams says she’s been tested four times more than her sporting peers.

Endemic racism is seen in the cases of athletes such as Semenya and others, where they have been targeted for an apparent reason but the underlying reason is often prejudice and unfair policies that strike at the essence of their human dignity.

Semenya is not a person who decided on a whim to use her biological advantages to race as a woman. She was raised a woman and has been running in races as a woman all her life. Her entire community knows her as the quiet yet determined and inspiring woman she is. To debate her gender and biology at the table of human opinion is both humiliating and degrading. And because she is a black woman, it’s been deemed acceptable for the world’s leading sporting authorities, led by men, to pry and prod at the core of her personal integrity and identity.

Respect for human dignity is the foundation of our society and is at the very centre of this case. Semenya has been stigmatised, humiliated and segregated because of her natural physical attributes. Yet the IAAF, a male dominated sporting organisation, believes she is “not female enough” for what they choose to name “the female category”. And so, as things currently stand, she is expected to become a guinea pig for untested science so she can conform to their standards of what it is to be a woman, to increase the chance for other female athletes to win.

I argue that if the current state of things is not overturned it sets a dangerous precedent in sport that will continue to create moral and ethical dilemmas that exploit the most vulnerable and oppressed members of society and keep the international elite arena of sport for a select portion of society.

Of course, there are claims that this case will “open the floodgates” and have far-reaching repercussions for sports and international competitions, but the concerns are misplaced. It certainly does not mean men will start competing in women’s races. Here, even talking about these fears of the giants smacks of racism. Would it be said if we were talking about a woman of another race?

The sporting arena has always been highly political and Nelson Mandela understood and leveraged its unique influence to change a nation. In his famous Laureus Sports Awards speech he reminded the world: “Sport has the power to change the world ... Sport can create hope where there was once despair. It is more powerful than governments in breaking down racial barriers. It laughs in the face of all types of discrimination.”

It would be good for the world’s sporting federations to remember the words of our former political David who took on the giant of apartheid and harnessed the power of sport to break down global barriers of institutional racism, which sadly are still alive and well across the world. Until then we can and must take on the giant of systemic racism, one Goliath at a time.

Pole vaulter Yelena Isinbayeva soared above all, but also made waves

The jovial athlete raked in Olympic gold medals and world records, and was critical of Russia’s doping ban
Sport
1 year ago

Devlin Brown at the water cooler: Fitness trends for 2020

Devlin Brown at the water cooler: Fitness trends for 2020