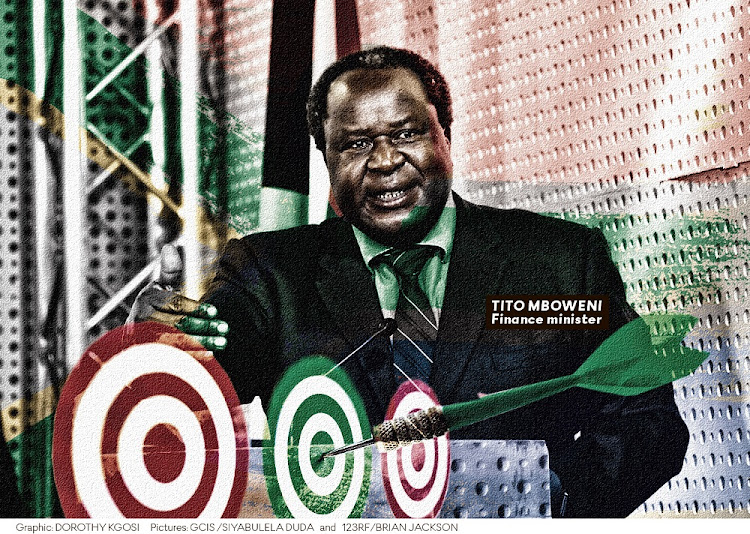 Napoleon used to ask of a man: “Has he luck?” Ability, experience, integrity and credibility are important, but without luck these are useless, he said. As an esteemed former central banker, finance minister Tito Mboweni has brought all these attributes to bear at the National Treasury.

When he delivered his 2020 budget speech in February Mboweni hoped that fiscal consolidation, combined with the implementation of the Treasury’s growth strategy, might just turn the economy around and prevent a downgrade to universal “junk status”.

But the finance minister has been unlucky. The shock of Covid-19 and the subsequent prolonged economic lockdown, as well as the reality of junk status, have now compelled the Treasury to craft a so-called emergency budget. All economic forecasts have had to be reviewed and extensively updated.

LUKANYO MNYANDA: What shouldn’t be done as SA stares a debt crisis in...

Given the unprecedented trajectory of the pandemic, domestically and globally, the confusion about SA’s lockdown exit strategy, and the growing opposition in some quarters to the Treasury’s thinking on certain matters, Mboweni has clearly had a run of bad luck.

Superimposed on the good intentions of the original 2020/2021 budget was the unplanned April announcement of an additional R500bn, representing a significant 10% of GDP, being injected into the economy while it slid precipitously towards a deep(er) recession in 2020. Business failures are widespread, unemployment is rising rapidly and tax revenues have fallen dramatically. Both business and consumer confidence are at record lows and weak pre-existing economic conditions have constrained what little fiscal space is left.

The Economist recently ranked 66 emerging economies using four indicators of financial vulnerability: public debt, foreign debt, cost of borrowing and forex. Most of the economies that fared badly were small, with SA relegated to 47th place. This indicative framework helps identify the long-term fiscal risks. The Treasury may now be recalling with nostalgia SA’s reaction to the global economic crisis of 2008-2009. The economy had more buffers then and there was broader stakeholder consensus, which permitted an effective response to the prevailing global recession.

Inevitably, public borrowing in SA is now set to soar. The public debt explosion presents policymakers with difficult choices, which cannot be avoided. But what also matters is not the absolute level of borrowing but rather how well the money is spent and the cost of servicing the debt. SA has to borrow as cheaply as possible. The budget statement should provide an update on the status of SA’s negotiations with multilateral institutions. Emergency Covid-19-related loans on easy terms are available from the International Monetary Fund (IMF), which should reassure those concerned that SA’s national sovereignty will otherwise be impinged upon.

Economic steermanship is needed to ensure that the revised budget strikes the right notes and puts SA on a realistic path to avoid a sovereign debt crisis in a few years. In this process the economic forecasts have to be credible. The supplementary budget therefore has to walk the challenging path between expansive economic support now and fiscal sustainability in future. Zero-based budgeting is a tool that can help meet this challenge on the spending side. SA has to break out of its low-growth trap without falling into a debt trap.

The revised budget needs to broadly reassure the nation and business that as the lockdown eases not only are policy steps being implemented to underpin recovery but economic reform is also backed. Fundamental reform is essential for sustainable economic recovery, particularly as Covid-19 has reinforced SA’s deep socioeconomic faultlines. How best should economic recovery be combined with structural reform, outcomes with potentially different timelines?

The first imperative is to convey a strong sense of urgency. The real tragedy of much policy-making in SA in the past has been the failure to properly implement several workable plans and “stay on message”. Acceptable road maps include the National Development Plan (NDP) and its latest offshoot, the Treasury’s growth strategy released in 2019. Does SA really need yet another, brand-new economic plan to deal with Covid-19 and its aftermath?

More than before, time is of the essence. What the country requires is a smart package of measures that piggyback off the macroeconomic steps now being taken to deal with the immediate economic contraction, while also addressing the deeper, more fundamental issues that could lift job-rich growth onto a higher plane beyond 2021.

For years, successive waves of good plans, policies and projects have regularly beaten in vain against the rocks of poor state capacity. The handling of the Covid-19 crisis itself has been a victim of this general failing. Countless studies confirm that it is the capacity of the state ‒ and not its scope ‒ that is important for long-term growth. And the Organisation for Economic Co-operation and Development (OECD) once warned SA that there was a basic contradiction between the failures of state capacity and the customary reliance on state programmes to rectify these very failures. In short, stop “flogging the system”. Reform is the key, especially when so much more is now at stake for SA.

Unfinished fiscal business includes the public sector wage bill issue and the chronic uncertainty about the financing and restructuring of state-owned enterprises such as SAA and Eskom. Tough decisions are needed soon on the merits of using increasingly scarce resources to continue to prop up ailing parastatals, instead of tackling new, urgent socioeconomic imperatives, such as overhauling public health. Just as it can no longer be business as usual, so the revised budget must convey the message that it is no longer “ideology as usual”.

Its central purpose should be to build confidence in how the economy will now be managed and to offer a vision of a better road ahead. Much rests on us, as a nation, to address long-standing weaknesses and build on our strengths, with which we are still quite generously endowed.

It is time to demonstrate that Mboweni does not have to be the man with bad luck.

• Parsons is a professor at the North West University Business School and editor of a soon-to-be-published ‘Recession, Recovery and Reform: SA after Covid-19’.

While some cities are able to raise capital in debt markets to finance developments, others are not
Opinion
11 months ago

JOHN STEENHUISEN: Runaway debt cannot be the new normal as debt is not free

Structural reform is the only way to return to balanced budgets and debt stability in the medium term, write John Steenhuisen
Opinion
1 year ago

Before the Covid-19 crisis, which has sent 90% of countries into deep recession, the Treasury had anticipated a budget deficit for the fiscal year of ...
National
1 year ago