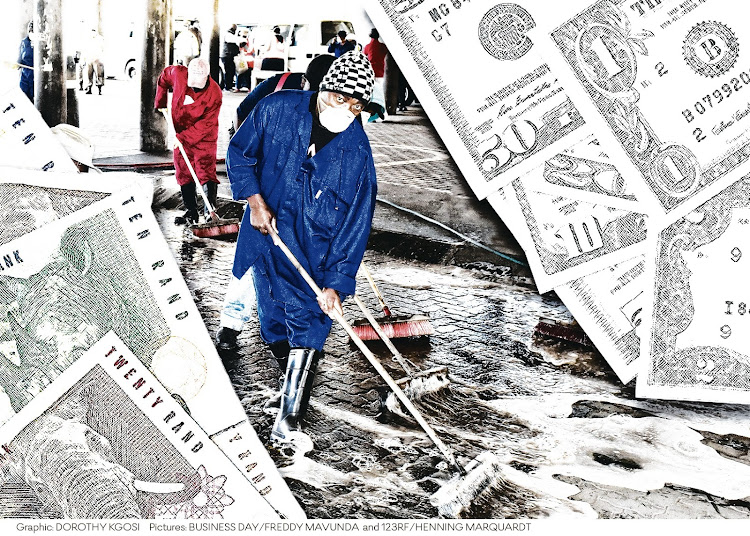 The Covid-19 pandemic was not a “black swan” event. It was not extraneous to a political economy driven by voracious profit-maximising inordinately privileging a tiny global minority. Land grabs, deforestation, monoculture crops and general habitat destruction have brought humans into closer contact with virus-incubating wild animals. Global value chains between low-wage economies and centres of rent-seeking and consumption have acted as vectors for rapid transmission.

Even in the more advanced economies, far away from a Wuhan or an Equatorial Guinea, factory farming and the routine use of antibiotics have resulted in the emergence of new strains of superbacteria and virulent (but regional for the moment) epidemics. A global pandemic of the kind we are now experiencing was predictable and predicted. Even bigger threats loom from the destructive effect of climate change, which if not thwarted will make large parts of the world uninhabitable.

The Covid-19 health emergency will plunge the global economy into a recession worse than the 2008-2009 Great Recession. It could even track the 1930s Great Depression. SA will experience a GDP contraction of 6% or more and unemployment, already at crisis levels, will nearly double.

The SACP and its alliance partners have commended the active leadership role played by President Cyril Ramaphosa and his government in the face of the health crisis. Their early and sustained response to the pandemic has been in marked contrast to tragic denialism and laissez-faire mis-leadership in some more developed countries.

Finding the right balance between curbing the pandemic while ensuring livelihoods in the complex reality of SA is not easy. Mistakes may be made. Excessive reliance on blunt-edged law enforcement must be condemned. Collective learning, especially from those on the health front line, respect for science, broad social mobilisation, consensus building, and a thousand and one local social solidarity initiatives should be our guiding themes.

But what will SA’s trajectory be in a post-Covid reality (if, indeed, there is to be one)? That trajectory will be determined partly by how we respond now. One thing is certain: we cannot go back to the crisis before this crisis. We cannot return to the virulent unemployment, poverty and inequality of 2019 and preceding decades.

We need serious land reform that finally begins to abolish health-risky and unproductive apartheid urban settlement patterns, rural destitution and food insecurity. We need a huge infrastructure programme that is labour intensive, that drives a green, just transition, building economic, social and environmental resilience and sustainability. We need a serious (re)-industrialisation programme, finally at a scale that breaks the chains of our colonially defined place in the global division of labour as producer and exporter of primary products.

Fifty days into our own lockdown, health minister Zweli Mkhize was still calling for nursing posts to be unfrozen. That bears witness to the devastating impact of our own knee-on-throat austerity programme, euphemistically called fiscal consolidation.

For serious structural transformation to be catalysed a major stimulus package is required. But it cannot be a stimulus package that mimics what was implemented in the US, for instance, in response to the great recession of 2008/2009. This consisted of highly partisan bailouts and subsidies for powerful vested capitalist interests. It included $16.8-trillion in bank bailout commitments, tax cuts for the rich, and quantitative easing that was not directed into productive investment. It supported speculative financial activities based on increasing indebtedness of consumers.

Globally, since 2008-2009 mainstream economists have been compelled to rethink dogmatic assumptions and explore heterodox macroeconomic approaches in the light of a lack of economic recovery, with “secular stagnation” affecting the dominant economies even before Covid-19.

Most of the leadership in the SA Reserve Bank and Treasury remain locked in an ideological backwater dogmatism. The Treasury and the Bank were prepared to finance up to R200bn directly from the central bank for a loan guarantee that mainly benefits the highly oligopolistic private banking sector. In effect, whatever the denials, this was a version of quantitative easing — printing money — for the benefit of commercial banks.

What made this worse is that the Treasury will stand as guarantor to the Bank for these loans. The Treasury has undertaken, should the need arise, to absorb “any further losses” that may occur from the scheme at taxpayers’ expense! As a recent statement by leading SA economists notes this further “cocks the austerity gun for shooting holes in social spending in the coming national budgets”.

While the Reserve Bank leadership preach monetary rectitude, the Financial Intelligence Centre estimates that SA is a victim of illicit financial outflows of $10bn to $25bn a year. This is a huge failure of the Bank. This is in addition to the already far too lax capital controls that have been successively watered down since 1994, and underwriting a huge drain on investible domestic surplus.

While we fight the scourge of state capture, we also need to guard against the huge social cost to our country of the revolving door of senior personnel between the Treasury, the Bank and the major commercial banks and wider financial sector. This interbreeding has nurtured a smug, doctrinaire outlook, and a self-righteousness given further legs by the grievous sins of state capture.

There is a desperate need for change. A sustained stimulus package for structural transformation requires a change in Reserve Bank policy to avail financing directly into public spending for extra social grants, infrastructure and a just green transition.

As a country we need to build on the advantage that most of our public debt is rand-denominated. We need to marshal domestic resources trapped in public and private financial resources and minimise dollar-denominated loans.

• The authors are SA Communist Party central committee members. This is a summary of the party discussion document titled “Towards an SACP Strategic Perspective on a Post Covid-19 Sustainable Recovery and Development Programme”.

The base case prediction for the global economy is a contraction of 5.2% — and it could be as much as 8%
Economy
10 months ago