When not watching Naked and Afraid, smoking weed or demanding money from the government, Musk makes cars 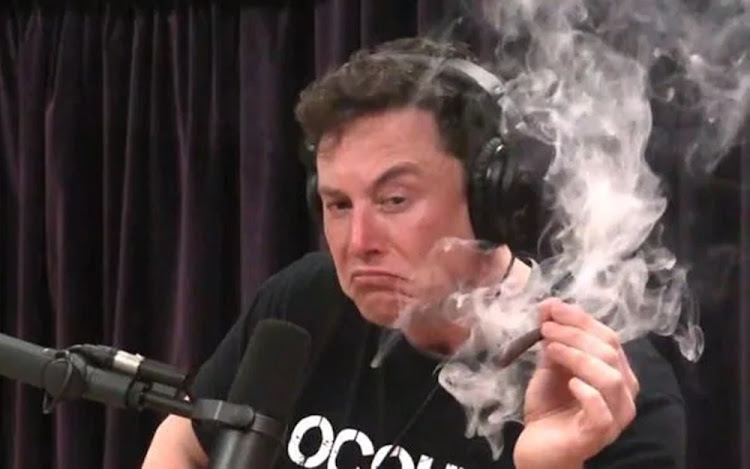 Elon Musk smoking a joint on a podcast hosted by the comedian Joe Rogan.

We have had much of Elon Musk.

We’ve had Musk smoking weed and sipping whiskey on a podcast while assessing humanity: “We’re all chimps. We’re one notch, one notch above a chimp ... If you watch some show like Naked and Afraid, or, you know, if you just go and try living in the woods by yourself for a while, you’re like, ‘The land, and that civilisation, is quite great.’ People want to come back to civilisation pretty fast on Naked and Afraid.”

We’ve had Musk on the same radio show talking about the darkness lurking among us: “Like, how bad is the millionth worst person in the US? Pretty damn bad. Like damn evil ... One in a million of evil is so evil people cannot even conceive of it.”

There’s Musk the voracious reader, taking cues from titans such as Alexander the Great. The economist: “If you don’t make stuff, there’s no stuff.” The space colonist: “I think most likely the form of government of Mars would be a direct democracy, not representative.”

The guy pitching Tony Stark in an Iron Man 2 cameo: “I’ve got a good idea for an electric jet.” The artificial intelligence (AI) enthusiast who thinks, à la The Matrix, that our lives may be a vast computer simulation: “There's a billion-to-one chance we're living in base reality ... Arguably we should hope that that’s true, because otherwise, if civilisation stops advancing, that may be due to some calamitous event that erases civilisation.”

Still, I thought, he would maybe hit one gonad but not both

There’s Musk the financier, mysteriously claiming he had “funding secured” to take his company, Tesla, private.

The litigant, battling the US Securities and Exchange Commission (SEC) over fraud charges: “I do not respect the SEC. I do not respect them.” The stock picker, wiping almost $15bn off Tesla’s valuation by observing publicly that its shares were too pricey.

There’s Musk the daredevil, placing a balloon between his legs at his birthday party and allowing a knife thrower to try popping it: “I’d seen him before but did worry that maybe he could have an off day. Still, I thought, he would maybe hit one gonad but not both.”

There’s Musk the epidemiologist, tweeting on March 6: “The coronavirus panic is dumb.” The doctor, hyping hydroxychloroquine and incorrectly opining that the coronavirus is a “specific form of the common cold”. The political theorist, decrying the coronavirus lockdowns: “This is fascist. This is not democratic. This is not freedom.”

And we’ve had Musk doubling down about Covid-19 lockdowns more recently: “You should be allowed to do what you want as long as it does not endanger others ... I think there’s the question of where do civil liberties fit in this picture? And what can the government make you do, what can they make you not do, and what’s OK?”

So it’s important to remember that this is what Musk truly does: he makes cars.

Musk enjoyed a lucrative string of entrepreneurial successes — Zip2, X.com, and PayPal Holdings — before he joined Tesla. He also wants to build cool tunnels, has started a pair of AI companies, makes solar panels, and has a rocket company, SpaceX. But Tesla — an admirable, sexy and important gamble on electric automobiles — is his calling card.

Musk’s business achievements haven’t landed him in that pantheon, but he is an avatar for a certain kind of Silicon Valley yahooism specific to many technocrats sprung from its corporate ranks. Their observations about the social order and common weal get more attention and take on more gravitas than they deserve, boosted and hurried along by the idea that great wealth confers great wisdom — when, of course, wisdom must be authentically earned and demonstrated.

There certainly are abundantly wise members of the business community, and Bill Gates and Warren Buffett arguably qualify. Others, not so much. Musk may simply be charting a Dunning-Kruger course through all of his soothsaying, but when he complains about the shackles of big government, hypocrisy is at work, too.

A strong libertarian streak runs through Silicon Valley’s politics, though it historically owes much of its existence and riches to the financial and logistical support of the federal government. It’s a bright example of a public-private partnership that has succeeded spectacularly. Musk is a product of that world.

His philosophy is winner-take-all, even if he got there with lots of help from other people — including people in the government

Over the years, Tesla has received billions of dollars in government subsidies and tax credits meant to further the development of affordable electric vehicles. Conservatives have taken shots at Tesla for receiving department of energy loans and cite it as an example of corporate welfare run amok, but in my mind it’s another example of the kind of public-private partnership that, in theory, is worth it even if, in practice, it hits roadblocks.

In Musk’s mind, however, all of that appears to be an afterthought, even though the bulk of his wealth is also tied up in Tesla’s fortunes. Much of his recent carping springs from his belief that the local government is getting in his way by ordering him to keep his main plant in California, closed as a matter of prudence and public health amid the coronavirus pandemic. (At least two Tesla employees have tested positive for the virus.)

Musk the rebel threatened to move the plant out of California and invited the local police to come and arrest him last week as he stood strong with his workers in the Fremont plant he decided to reopen. An accommodation was reached and Musk wasn’t locked up, but he has set a bad example.

Civilisation, and figuring out the sacrifices and accommodations that make civilisation and community work, is a trickier proposition than Musk, the Naked and Afraid fan, allows. His philosophy is winner-take-all, even if he got there with lots of help from other people — including people in the government. In his world, you accept the government’s support and the government’s rules when it suits you, and you reject them when they don’t — even when, contrary to your own philosophy, what you’re doing endangers other people.

Those manoeuvres may have worked in the Before Times. But in the world being savaged and remade by the coronavirus, there’s a good chance that the businessperson who helps define the era coming after won’t roll like Musk — and won’t have much of a choice about it.

• Timothy L O'Brien is a senior columnist for Bloomberg Opinion. This column does not necessarily reflect the opinion of the editorial board or Bloomberg LP and its owners.

Tesla furloughing staff but Shanghai factory is up and running

CEO fears that unless SpaceX ups its progress, he will be dead by the time it reaches the planet
Life
1 year ago
Next Article

A moral approach is necessary to curb technology’s soft tyranny

A moral approach is necessary to curb technology’s soft tyranny