The heavy-handed, top-down approach during the lockdown has not worked; NGOs, coalitions and community networks have 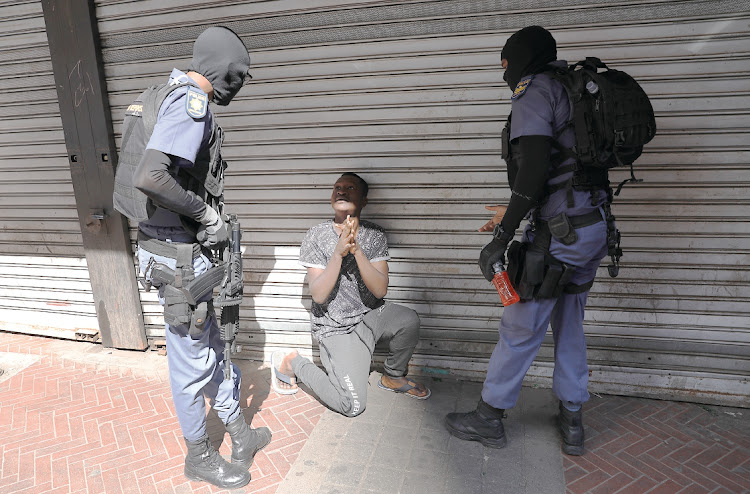 Police officers patrol the streets in Yeoville and the inner city in Johannesburg, during the national lockdown to curb the spread of Covid-19. Picture: ALON SKUY

A popular movement has arisen with extraordinary rapidity in response to the Covid-19 pandemic. With the announcement of a state of disaster, activists in communities across the country mobilised to protect their communities.

For example, the Amadiba Crisis Committee, established to fight against the destruction of land by mining on the Wild Coast, formed teams to move from household to household distributing sanitiser and talking about the necessity for physical-distancing.

In Khayelitsha, Cape Town, the Social Justice Coalition formed a community action network (CAN) and mobilised to demand water tanks from the city — which actually arrived within a week. The CAN, too, organised teams to inform community members about how to respond to the pandemic. The broader CAN movement in Cape Town has expanded to play a similar role.

In Ekurhuleni, the General Industries Workers Union of SA and the Casual Workers Advice Office printed 700,000 pamphlets about the coronavirus, distributing these at taxi ranks and in communities, and also made their own sanitiser for distribution. The street patrollers in the Yeoville Community Policing Forum marshalled at the long queues at local supermarkets, encouraging physical-distancing and resolving conflicts.

Meanwhile, at the national level, a diverse network of activists came together with the aim of co-ordinating a popular response to the state of disaster and the pandemic.

These failures by the government suggest it is still trapped in a view of its poor and working-class as passive recipients of charity incapable of agency ... sources of infection who must be quarantined

They were motivated by three overriding concerns: to strengthen community responses; ensure government responses did not exacerbate inequality and exclusion; and propose measures that would not only counter the immediate social and economic crisis, but also lay the foundations for a different kind of future.

Within a week they had established a broad coalition, which, by now, is supported by 250 movements, NGOs, trade unions, informal sector workers, feminist groups, faith-based organisations, research centres and public health networks — the biggest coalition SA has seen since the 1983 formation of the United Democratic Front.

The coalition has about 20 working groups, undertaking work ranging from building community organisation to distributing food parcels, and from policy work to repression monitoring and gender organising.

These and other initiatives that are not part of the C19 People’s Coalition reveal a vibrant and resourceful set of movements and networks with deep roots in communities and workplaces. Yet despite efforts, and notwithstanding some ad hoc local collaborations, there has been no systematic engagement from a government which, it is increasingly clear, is too distant and disorganised to directly access communities and ameliorate desperation and social distress.

Its food parcel efforts are hindered by bureaucratic processes to limit beneficiaries to the “deserving poor”, and failed promises have provoked tensions and food riots in some areas.

Indeed, the state’s most visible presence in communities is in the form of the police, municipal law enforcement, and the army, which has been set the often unattainable task of enforcing the lockdown in communities where compliance is impossible. This has led to many instances of brutal, illegal and unjustifiable force being used against people across the country.

These have turned fatal in some cases — the death of Collins Khoza in Alexandra, who was allegedly assaulted by soldiers; the death of Sibusiso Amos in Vosloorus allegedly from the intervention of Ekurhuleni metro police and private security; and the Independent Police Investigative Directorate is now investigating the death of a man in Soweto, who was allegedly assaulted by police. Multiple reports received by the coalition provide a snapshot of the abuse of power, corruption, human rights abuses, humiliating treatment and violent assaults perpetrated by security forces.

To make matters worse, local governments, together with security forces, have also carried out illegal evictions in Cape Town, Johannesburg and Ethekwini, where the ANC authorities have continued their vicious vendetta against Abahlali baseMjondolo [a shack-dwellers’ movement that campaigns both against evictions and for public housing] under cover of the lockdown.

In all three metros there are reports and images from informal settlements and land occupations of people being assaulted, shot at and dragged out of shacks by law enforcement who have been sent out to tear down these structures. Cape Town’s mass internment camp for the homeless in Strandfontein has also been severely criticised for being overcrowded, unsafe and flouting the health requirements for curbing the spread of the coronavirus.

This is not the way to fight the pandemic. Quite the opposite — it is more likely to accelerate the pandemic and produce non-compliance in alienated and starving communities. These failures by the government suggest it is still trapped in a view of its poor and working-class as passive recipients of charity incapable of agency; generally undeserving of support, unless at starvation’s door; sources of infection who must be quarantined; and “dangerous classes” who pose a threat to authority and order.

These attitudes have deep colonial roots. Using repressive state machinery for public-health purposes serves to further entrench the historic frictions that already exist between the police, army and society. It weakens the relationship between state institutions and communities even further and increases the frustration of individuals and communities.

If President Cyril Ramaphosa and his government are to have any hope of managing the public healthcare crisis they need to decisively dispense with this apartheid heritage and work closely with popular movements, unions and civil society to educate, provide services and food, and devise appropriate public-health strategies and lockdown codes for precarious, overcrowded and desperate communities.

• Prof Von Holdt and Essop are based at the Wits Society Work and Politics Institute. Both are involved in the C19 People’s Coalition.

More than 73,000 additional soldiers to be deployed

Reports of abuse of power and violence, with eight reported dead, are allegations without ‘specificities’, the president says
National
1 year ago

LETTER: Send soldiers to the Cape

Employers have a duty to ensure the health and safety of workers when SA slowly returns to work,  write Robin George
Opinion
11 months ago
Next Article

Coronavirus infects four with links to the military, says SANDF

Coronavirus infects four with links to the military, says SANDF