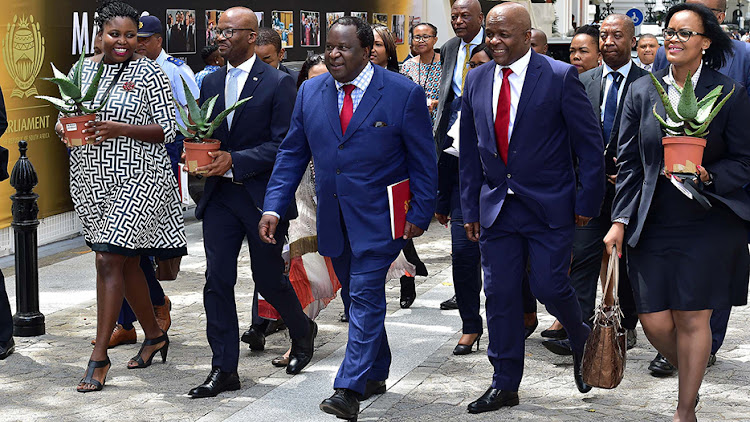 This article was originally published on Investec Focus.

Finance minister Tito Mboweni’s 2019 budget confirmed a cash injection for Eskom, in a tough fiscal environment with a moderate growth forecast and higher projected shortfall. As such, the deficit may likely increase over the next year or so, before pulling back again.

The minister’s approach to the Eskom crisis of mounting debt and maintenance woes was expected, reinforcing the risk of a possible downgrade by credit rating agency Moody’s within the next 18 months. Mboweni used a hardline stand declaring that “the national government is not taking on Eskom’s debt. Eskom took on the debt, it must ultimately repay it.”

Listen to the podcast | Tricky Conversations

However, the power utility will receive a R69bn boost over three years, but with strict conditions. Key to this is the appointment of an independent chief reorganisation officer, by ministers of finance and public enterprises. This financial lifeline for Eskom is merely a stopgap since the entity’s financial problems run deep.

The knock on effect of the minister’s approach is the subsequent rise in government expenditure. The expenditure ceiling will be increased by R16bn over the next three years, mainly due to provisional allocations for reconfiguring Eskom.

SA’s debt servicing costs will naturally also rise as a consequence of the rise in debt projections.

"I do however think that the risk of a negative outlook still remains purely on the back of the fact that the debt levels, percentage of GDP rose quite substantially." – Annabel Bishop, Investec chief economist

“Put another way,” Mboweni said, “we are borrowing [at a rate of] about R1.2bn a day, assuming we don’t borrow money on the weekend.”

This may be seen as credit negative by Moody’s, but since it’s only projected to last a year, that may be enough to stave off an actual credit rating downgrade (or even change to the outlook) for the year, according to Investec’s chief economist, Annabel Bishop.

As predicted, there were no big tax surprises in the 2019 budget speech.

While direct taxes have not been increased (other than bracket creep which is expected to raise R12.8bn), there will be increases in the so-called sin taxes as well as taxes on fuel.

“In my opinion, one of the most uneventful budgets in years,” said Rene van Zyl, tax and fiduciary advisory, Investec Wealth and Investment.

"The minister made it very clear that there are no quick fixes and I’m not sure that there are enough taxes that you can actually increase that will help with our R245bn deficit." – Rene van Zyl, tax fiduciary and expert

“If you look closely you will see that there were no changes to any 'mainstream' tax rates. Government proposed a small increase in personal income tax rebates, with no inflationary adjustment to the tax brackets (which is expected to raise 12.8bn).”

The national government is not taking on Eskom’s debt. Eskom took on the debt, it must ultimately repay it.

Together, the below-inflation increases in fuel taxes and the carbon tax on fuel will raise R1.3bn. Increases in alcohol and tobacco excise duties will raise revenue of R1bn.

A key focus for Mboweni will be vastly improved efficiency planned at the South African Revenue Service (SARS) in the face of falling levels of tax assessments. SARS tax stats have shown that individual taxpayers are falling in numbers, as are businesses. Though still under investigation, it is evidence of high inefficiencies and poor collection rates which ultimately contribute to a very weak revenue outcome.

Improving collections hinges on restoring the efficiency of SARS. In the short term, such improvements may be more effective in raising revenue than further substantial tax increases.

There was little room to make significant tax adjustments when the tax burden is already a heavy load and the economy is not growing. Instead of a heavy tax punch, the theme was around restoring confidence in the credibility of the South African Revenue Service. A new permanent SARS commissioner will be appointed in the coming weeks, in an attempt to pull SARS together.

Investment strategist, Chris Holdsworth feels the Budget was pretty standard on a net basis, and that he felt optimistic with regards to the retail sector.

"There was comment with regards to privatisation, vague as it was, which would no doubt be well-received," he said, "and there was an indication that there is going to be a concerted effort to reduce the wage bill for the State, which has been the primary concern from foreign investors in particular.

Watch the video | "We dodged a worst-case scenario"

"They could have said, 'We’re giving R100bn straight away to Eskom' and then Moody’s would have been finding reasons for a downgrade, pronto. They (Treasury) didn’t do that, because they’re cognisant of the risks." – Chris Holdsworth, investment strategist

Holdsworth added that the Budget's effect on the consumer will need to be measured, and the subsequent effect on the retail space.

"There’s no allowance whatsoever for bracket creep – that takes away about R13bn from consumer spend, and add to that the fuel levy – that’s another R3bn or so. The carbon tax we were expecting. And with the VAT zero-rating – that takes about R1bn off," he said.

"Net-net you’re looking at about a R15bn hit to consumption from consumers."

He pointed out that relief was still prevalent from the previous fuel price which equated to about R39bn over the year.

"And now just less than half of that’s been taken away, and we need to work out if that’s priced in or not," he said.

The rand dips, then settles

There was some panic in the markets as Mboweni delivered the budget speech in Parliament.

The rand weakened to R14.37 to the dollar and asset classes in South Africa on a downward spiral as the news of a R69bn bailout for Eskom and a blown debt ceiling were announced, but there was a complete turnaround that saw the rand strengthen.

Holdsworth said it was "hard to understand immediately why the rand was blowing out to the extent it was" as headlines didn’t appear to be too bad, apart from any referring to the breach of the debt ceiling.

"The best way to describe it is 'much of a muchness'," he said.

"We knew Eskom needed to get some money, [so] there’s not much that’s changed relative to expectations."

Watch the video | Debt to GDP

"The cash injection into Eskom will result in government's expenditure ceiling being breached for the first time in six years." – Tertia Jacobs, Treasury expert

"The consequence is that all of [Eskom's debt] cannot be financed by a cut in expenditure so there will be a tax increase that will generate more income but also an increase in bond supply," says Treasury expert, Tertia Jacobs.

"Because of that, we have now seen an increase in the debt to GDP trajectory to more than 60% over the next 4 years... it's is concerning because the consequence of that is: government spends more to service its debt," Jacobs adds.

She goes on to say that while the original reaction of the bond market, and the rand, to the budget, was negative, the rand and the bond yield settled back very quickly.

Head of fixed income and currency trading at Investec, David Gracey qualifies this by saying: “I think what’s happened is that the market has repriced its anticipation of a credit downgrade simply based on the fact that the Eskom bailout is spread over three years and that perhaps the projections are not as bad as what was built into the pricing.

“I am a little bit cynical, I am a little bit sceptical – I wonder if those estimates are not on the conservative side and whether in-fact we can attain those numbers. Certainly, for now, the market has reassessed the risks to the downgrade and hence we’d seen the turnaround in the rand.”

"The global backdrop is supportive for EM currencies, but I'm not sure this provides the ammunition for the bulls to climb in." – David Gracey

The domestic picture showed some good export flows when the rand hit past the R14.30 mark.

“Initially as the budget came out and the announcements came out there was a little bit of panic mainly from offshore names, but exporters did come in to provide some support," said Gracey.

"The reassessment of the credit downgrade or the potential downgrade did see a turnaround in that and hence the rand has performed very well today contrary to most expectations including mine.

"We still have some policy uncertainty and perhaps a little bit of policy confusion. We’ve had 10 years mismanagement and graft and outright theft. That’s going to take a long time to repair," he said.