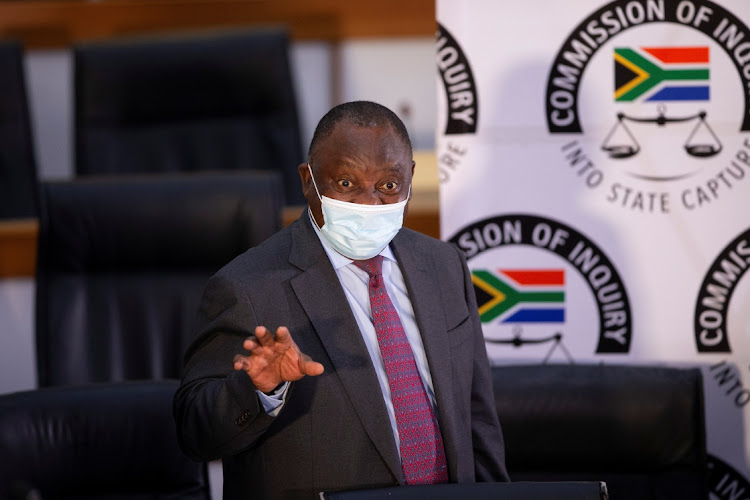 President Cyril Ramaphosa, who is testifying for a second day at the Zondo commission, insisted that the ANC in parliament was merely slow in responding to allegations of state capture, rebuffing claims that the organisation had blocked the parliamentary oversight demanded by the constitution.

At the time when multiple allegations had surfaced in the media, Ramaphosa was both the leader of government business and head of the ANC’s political committee — a subcommittee of the national executive — which directs the ruling party’s caucus.

In terms of the constitution, parliament is obliged to provide mechanisms to ensure that all organs of state are accountable to it and must maintain oversight of all executive authority.

Shown extensive evidence of media reports from 2011, which exposed the influence of the Gupta family over state affairs and appointments in state-owned enterprises (SOEs), Ramaphosa argued that the ANC had decided at its conference in 2012 to become more “activist” at parliament but that there was “a lag” in putting this into effect.

The ANC eventually agreed to conduct an inquiry into the capture of SOEs in May 2017 after turning down a request by DA MP Natasha Mazzone and voting against a DA resolution in the National Assembly in March 2016. The ANC instead proposed a countermotion in which it suggested that MPs with evidence of state capture provide this to the police or to the public protector.

Evidence leader Alec Freund put it to Ramaphosa that rather than a delay “there was a very determined resistance that parliament should exercise its duty. There was a complete unwillingness of parliament to investigate ... the true fact was that the ANC was determined not to probe.”

Ramaphosa replied: “I wouldn’t say so. Initially the thinking was that the investigation be done by law enforcement and chapter 9 institutions ... and in the end the parliamentary process was activated. Where there was a fault was that there was a delay.”

Deputy chief justice Raymond Zondo said that given the amount of information in the public domain about state capture as well as the Gupta wedding party landing at Waterkloof airbase, the delay was hard to accept.

“That the ANC took another three years to start being active seems to me to be a delay that is difficult to accept,” he said.

Ramaphosa’s evidence as ANC leader continues. He will also give evidence in his capacity as head of state at the end of May.

Cyril Ramaphosa, in his capacity as ANC president, is giving evidence to the state-capture commission
National
2 weeks ago

The president has, though, conceded there are ‘instances’ where it has gone wrong
National
2 weeks ago
Next Article