We are fighting for our livelihoods, cash-strapped mineworkers say 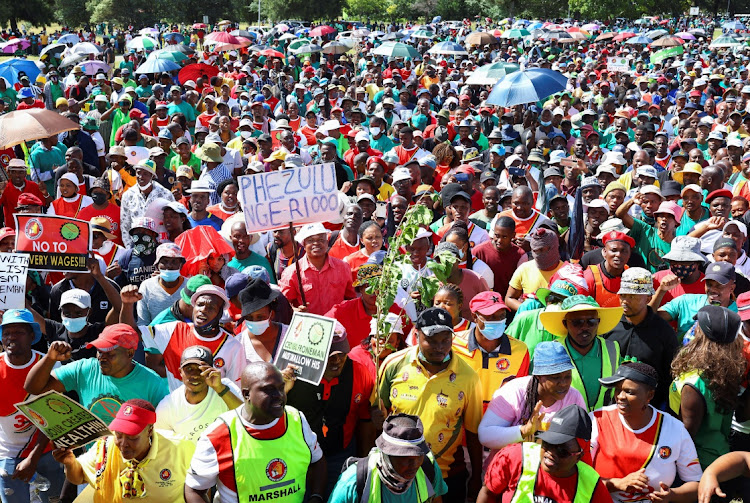 “If SA has to come to a standstill before we get our R1,000 increase, then so be it. We are fighting for our livelihoods here, and for the future of our children,” says Sindi Godongwana, who works at Sibanye-Stillwater’s Driefontein gold mine in Carletonville, west of Johannesburg.

Godongwana is among the 25,000-strong employees who have been on a wage strike at Sibanye’s gold operations since March 9, demanding a R1,000-per-month increase for three years, a R100 increase in living-out allowance and 6% pay hike for miners, artisans and officials.

The Sibanye offer, which the Association of Mineworkers and Construction Union (Amcu) and National Union of Mineworkers (NUM) have rejected, would translate to an increase of 7.8% in basic wages in the first year, 7.2% in the second and 6.8% in the third year. It would increase the miner’s wage bill by R1.67bn over the three years. The Reserve Bank has forecast a headline inflation rate of 4.9% for 2022.

The parties met in Boksburg last week to try to resolve the deadlock.

Business Day attended a mass meeting at the Driefontein gold mine in Carletonville on Friday, where Amcu and NUM leaders gave feedback to their members and sought a mandate on the way forward.

Amcu national treasurer Jimmy Gama said the employer offered unions a 5% profit share, but that negotiators rejected it as it was dependent on market conditions.

When the leaders asked the striking employees what the next step should be, they shouted in unison that the industrial action, which has resulted in them forfeiting more than R1bn in wages, should continue.

“What difference does it make to stop now. We are already used to the no-work no-pay principle. We won’t be backing down from our demands,” said Sabata Matela, a laundry operator. “It’s unfair that one man can earn R300m while workers who are responsible for meeting production targets are the ones suffering the most. We are hungry, we can’t support our children. We don’t earn a living wage.”

Rock drill operator Neo Moseki said the whole of Westonaria was taking a hit from the industrial action. “No-one is buying from the shops. We are making do with the little that we have. We are now surviving on my wife’s business of selling fatcakes. What is happening is very painful. The mine’s licence must be taken away and given to an investor who is going to give us a living wage,” Moseki said.

Speaking in parliament on Thursday, mineral resources & energy minister Gwede Mantashe threatened Sibanye-Stillwater with the removal of its mining right because the company is no longer engaged in gold-mining activities.

The minister threatened to take action against Sibanye in terms of section 47 of the Mineral & Petroleum Resources Development Act. The act requires the holder of a mining right to actively conduct mining, while section 47 empowers the minister to suspend or cancel a mining right if the holder fails to fulfil its obligations in terms of the right.

Nolihle Matshonyane, a rock drill operator, said: “It’s difficult to make ends meet the past months we have been on strike. Froneman is greedy. He has an evil heart.”

Patrick Letsie, a health and safety chair, said the government is failing workers and should have intervened earlier.

Zukiswa Momoza said: “We won’t go back to work until our demands are met. Our colleagues are having their cars repossessed and some have missed their monthly instalments on their bonded house, and we can’t pay our children’s school fees because there is no income.”

Sectional operator Zandiswa Mza said: “We work too hard to be earning peanuts, while the price of petrol, food and other necessities is going up. We are too deep in loan sharks [loans]. You find yourself taking a loan to settle another loan; it’s a vicious cycle.”

Lusindiso Bongelo, a rock drill operator from Beatrix gold mine in Free State, who attended Friday’s mass meeting, said: “We have reached a point of no return now. We will strike until the employer accedes to our demands.”

Amcu president Joseph Mathunjwa said Froneman earns R1,500 per minute. “With his R300m salary he could hire 2,315 workers and pay them R10,800 per month. We only want R1,000. He [Froneman] would not have got that R300m if it was not for you going underground,” Mathunjwa said as the crowds cheered him on.

He said the industrial action is a make-or-break for trade unionism in SA. “If our strike fails, unionism, as we know it, will come to an end in SA. Our children will be slaves of white people. Froneman wants to kill these two trade unions,” he said.

Mathunjwa said even the R1,000 increase they are demanding is too small. The R800 increase the employer was offering would be taxed and “you might end up getting R400”.

“We have come this far, victory is certain. We must be united in this struggle. God has given us this unity. We won't play with it …  whites have benefited from our disunity. This is a revolution. Capitalism is dangerous and brutal. If they touch any of our leaders, these mines will cease to operate.”

Amcu’s five-month strike from November 2018 at Sibanye’s gold operations cost the company R1.6bn and 110,000oz in production of gold, and claimed nine lives. Workers forfeited R1.5bn in pay, only for Amcu to accept the same terms, following in the footsteps of rival unions.

No common ground yet, says Amcu as Sibanye strike goes into week 10

1.
Law centre takes on Gauteng over health care for ...
National / Health
2.
If I am criminally charged, I will step aside, ...
National
3.
Eskom has spent R4bn on diesel so far in 2022
National
4.
Ramaphosa gets wheels turning to end Eskom strike
National
5.
PODCAST | The ministry is standing in the way, ...
National / Labour

Mineworkers must not end up losing due to strikes, Ramaphosa says

Gold output grinds to halt at Sibanye-Stillwater amid strike

1.
Law centre takes on Gauteng over health care for ...
National / Health
2.
If I am criminally charged, I will step aside, ...
National
3.
Eskom has spent R4bn on diesel so far in 2022
National
4.
Ramaphosa gets wheels turning to end Eskom strike
National
5.
PODCAST | The ministry is standing in the way, ...
National / Labour

Mineworkers must not end up losing due to strikes, Ramaphosa says

Gold output grinds to halt at Sibanye-Stillwater amid strike