Cosatu may withdraw its support for ANC before elections 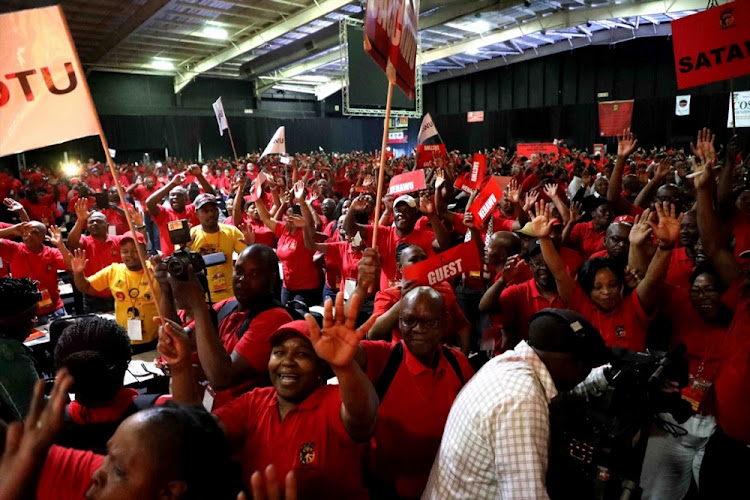 Cosatu could revisit its decision to support the ANC ahead of the May national elections at its next central executive committee.

The federation’s Gauteng leaders told reporters on Monday that they are deeply concerned about President Cyril Ramaphosa’s failure to consult organised labour about the unbundling of Eskom and other “emerging trends” reminiscent of the 1996 class project”.

The 1996 class project is a tag used by Cosatu and the SACP to describe ANC leaders in and out of government who promote policies which deviate from resolutions of the alliance and the interests of business.

Cosatu’s national congress held in 2018 resolved to support Ramaphosa and the ANC on condition that workers’ issues were prioritised and jobs were protected.

Central to their conditions was reconfiguration of the ANC-led tripartite alliance and broad consultation and consensus on policy issues.

However, Ramaphosa’s announcement that the financially strained Eskom would be split into three entities during the state of the nation address last Thursday seemed to have irked the federation.

The decision to unbundle Eskom has been rejected by all labour organisations in the country, with warnings that it would lead to mass job losses at the power utility.

Gauteng provincial secretary Dumisani Dakile said the Cosatu central committee would have to analyse these developments and hoped the structure would be “sober” enough to make a decision about that advocates the interests of its members.

“What we thought we defeated in Polokwane, the 1996 class project, has resurfaced and has [reared] its ugly head. The role played by Trevor Manuel [shows this], he was a serious soldier of the 1996 class projects, the chief architect of the NDP that we rejected. The appointment of Tito Mboweni as finance minister is part of that.

“The question of the unbundling is not a new debate; we thought we had resolved it. It feels like déjà vu,” Dakile explained.

Dakile said Cosatu was using its national strike planned for Thursday as a launching pad for a resistance campaign against job losses and “other anti-developmental state tendencies”.

“We are launching a massive fight … you can see and detect that the right wing of the ANC is in hegemony. One of the things we’ll need serious engagement on as Cosatu is whether the last 25 years saw a rise of capital, which is the deeper question that will be engaged with. Given the material evidence, what should be our attitude,” he said.

Cosatu in Gauteng will be protesting to the legislature and the minerals council where executives from various private businesses and SOEs will be handed memorandums.

There will also be seven other marches in other cities across the country.

HILARY JOFFE: Policy direction is promising, but it has to survive the politics

At a time when most people realise there is a national crisis on hand, organised labour is offering war instead
Opinion
3 years ago

If done well, the unbundling should help the biggest stakeholder in the game, which is the consumer
Economy
3 years ago

Eskom restructuring is just the illusion of action

Restructuring, which has nothing to do with debt, is not the answer, writes Melusi Maposa, learning the new rules and the one basic truth, however, is
Opinion
3 years ago

JUSTICE MALALA: The greatest threat to Ramaphosa’s vision is the enemy within the ANC

EDITOR’S LUNCHBOX: It was December and quiet, and still Eskom maintenance was ...

EDITOR’S LUNCHBOX: It was December and quiet, and still Eskom maintenance was ...