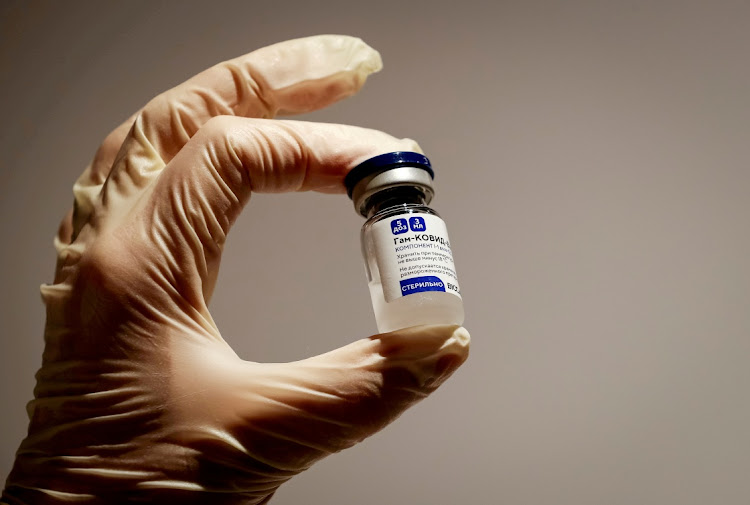 A vial of Sputnik V vaccine in a department store in Moscow, Russia. Picture: REUTERS/SHAMIL ZHUMATOV

After a series of delays, the government is poised to begin its national Covid-19 vaccination drive in May. It has clinched deals for 31-million doses of J&J’s single-shot vaccine, and 30-million doses of Pfizer’s two-shot regimen, enough to cover 46-million people.

Russia’s Sputnik V and Chinese vaccine manufacturer Sinovac Biotech’s CoronaVac have yet to be approved by SA’s medicines regulator. If the vaccines are approved by the SA Health Products Regulatory Authority (Sahpra) and negotiations are successful, the 10-million doses will enable a further 5-million people to be inoculated, taking the total beyond the 50-million mark. Both vaccines require two shots.

Sputnik V’s local partner Lamar International, however, told Business Day it could provide up to 20-million doses, while Sinovac’s local agent Numolox said it could supply the government with 5-million doses of CoronaVac. Both companies said they could provide vaccines as soon as they are approved by Sahpra.

“I have no doubt, given how important this territory is to the  Russian Direct Investment Fund (RDIF), that it would make stock available as soon as the emergency-use approval is granted,” said Lamar International operations director Naz Gamieldien. The RDIF developed Sputnik V with the Gamalaya Institute.

She declined to discuss pricing.

The AU is to pay $9.75 a dose for 300-million doses of Sputnik V, according to the Financial Times, on a par with the $10 a dose price SA is paying J&J and Pfizer vaccines.

Preliminary results from tests conducted by the Gamalaya Institute indicated the vaccine was effective against the 501Y.V2 coronavirus variant dominating transmission in SA, said Gamieldien. Sahpra has indicated its review of Sputnik V is at an advanced stage, she said.

Numolox CEO Hilton Klein said the company submitted its dossier to Sahpra in March. He said he is confident Sahpra will approve CoronaVac. “We really hope this can be made available as soon as possible, as there is an urgent need for these vaccines in SA. It is already available in 11 African countries, and more than 120-million people worldwide have been vaccinated.”

Health director-general Sandile Buthelezi assured MPs that officials are closely monitoring coronavirus infection rates across SA, looking for any signs of a sustained increase in cases that would signal the start of a third wave.

The latest projections from the National Institute for Communicable Diseases’ Covid-19 modelling consortium suggest the next surge in infections is likely to be less severe than the second wave, provided there are no new variants, he said.

Update: April 28 2021
This article has been updated with new information and comment throughout.

Antibodies generated in response appear to provide protection against others strains, say scientists
National
2 months ago
Next Article