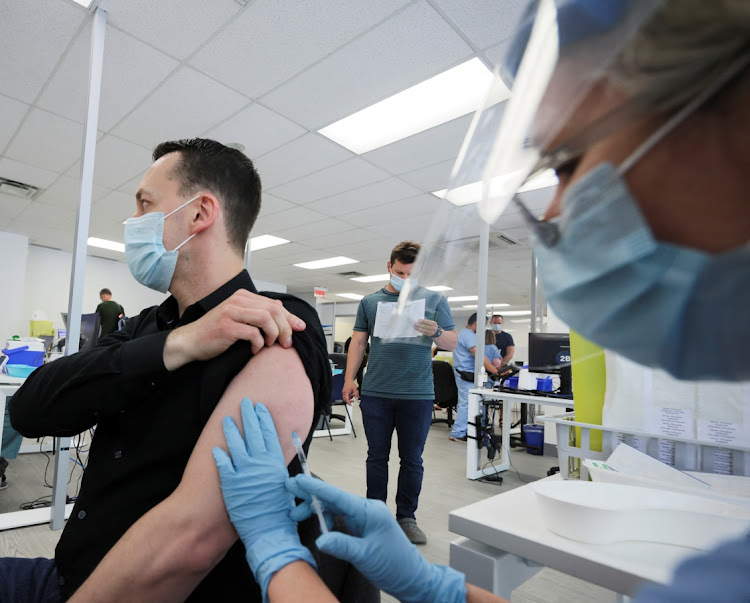 A man is vaccinated at a monkeypox vaccination clinic run by CIUSSS public health authorities in Montreal, Quebec, Canada, in this June 6 2022 file photo. REUTERS/CHRISTINNE MUSCHI

The patient is a 30-year-old man from Johannesburg with no travel history, and contact tracing is under way to identify any linked cases, he said.

“Monkeypox is usually a mild disease and self-limiting,” said the minister, emphasising that it is spread by close contact with an infected person.

Monkeypox is endemic to several countries in Central and West Africa and was discovered among research monkeys in 1958. The first human case was identified in the Democratic Republic of the Congo in 1970, and until very recently it was confined to sporadic outbreaks in endemic countries or among travellers to these areas.

But since May it has been detected in dozens of countries in disparate geographical regions, many with chains of transmission that have no apparent link to endemic countries. This development has caused global alarm and prompted heightened surveillance for the disease.

As of June 15, a total of 42 countries had reported over 2,100 laboratory-confirmed cases of monkeypox to the World Health Organisation (WHO). By Thursday the global case count had topped 3,000, according to SA’s National Institute for Communicable Diseases (NICD). Cases have been detected in the UK, Portugal, Germany, Spain, France and several other European countries as well as the US, Australia, Canada and Morocco.

“The cases to date mostly involve individuals that self-identify as men having sex with men. Risk factors include reporting multiple sexual partners. Recent large social events are thought to have served as superspreader events,” said the NICD.

It emphasised that this information is intended to provide context to the global outbreak.

“When we investigate an outbreak there are always characteristics specific to that outbreak, and we need to acknowledge it,” said NICD acting executive director Adrian Puren.

The decision to test the Johannesburg man for monkeypox was taken on Monday afternoon and the results were confirmed on Wednesday. No further suspected cases had been identified by Thursday afternoon.

Monkeypox is caused by a virus and is spread by close contact with an infected person. Only one person is known to have died from monkeypox in the current global outbreak, said Puren.

It causes flu-like symptoms and a rash that progresses to pus-filled blisters.

The incubation period can be as long as three weeks and patients remain infectious until their blisters heal and new skin forms, said Puren.

“We’ve never diagnosed a case of monkeypox in SA before. Until May 2022, that was the same for pretty much the rest of the world. What we are seeing now is new,” said Jacqueline Weyer, a scientist at the NICD’s centre for emerging and zoonotic diseases.

“If the outbreak is not brought under control quickly, one could see wider spread, so it is really important to [get] early containment,” she said.

Scientists do not know what is driving the current crop of monkeypox cases, given they are predominantly not linked to travel to Africa
World
1 month ago